Climate smart villages show how to adapt, and make money

Villages can be weather smart, water smart, carbon smart, nitrogen smart and energy smart, with the farmers making more money all the while 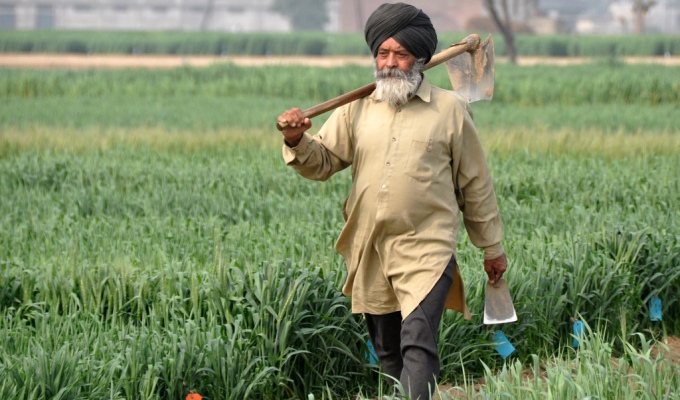 Some of the techniques are showing promising results in Haryana under a project of the Climate Change, Agriculture and Food Security (CCAFS) programme under Consultative Group of International Agricultural Research (CGIAR), which kicked off in 2012 in India and Nepal in South Asia. The project is also being expanded to four other Indian states, Bangladesh; Vietnam in south-east Asia; to Ethiopia, Kenya and Uganda in east Africa; in west Africa and in Guatemala and Nicaragua in Latin America.

“CCAFS is working towards a global alliance for climate-smart agriculture, which will be formalised at the UN summit in September,” Vanessa Meadu, commminications manager at CCAFS, said.

Three such ‘climate smart’  villages in the north Indian state of Haryana demonstrate that technology acceptance juxtaposed with market pragmatism and the farmers’ own judgement of which among the portfolio of interventions works best for them.

Haryana lies in India’s Indo-Gangetic Plain that is South Asia’s food basket and faces a grim future due to warming temperatures. Its main crop wheat is highly vulnerable to heat stress and studies project a a 6-23% decline in wheat yield in India by 2050; and 15-25% by 2080. Its other main crop, rice, consumes excessive water for irrigation. Haryana, fed only by a seasonal Ghaggar river, over-exploits its groundwater that has depleted alarmingly in recent decades.

As part of the CCAFS project, some villages in Haryana’s Karnal district are changing their cropping practices in various ways. One is to use direct seeded rice in which rice seeds are sown directly in a dry seedbed, in contrast to the traditional practice of sprouting rice seedlings in a nursery and transplanting them to intensely tilled fields with standing water.

Another technique is to replace the traditional method of continuous flooding of rice fields with alternate wetting and drying, using a monitoring instrument called a tensiometer that helps farmers decide when to irrigate their fields. “This technique eliminates emissions by an average of 48%,” Jat said.

Similarly, tools such as sensors and leaf colour charts are used to determine optimum fertiliser dosage. “We have seen for ourselves how over-use of fertilisers not only increases production costs, but also damages the soil and contaminates ground water,” a farmer in Taraori village said.

Zero tillage, which involves growing crops without disturbing the soil, helps save about $79 per hectare in production costs, a CCAGS-CIMMYT study in Haryana showed. Similarly, laser land levelling – using a tractor-towed, laser-controlled device to get a flat surface that ensures uniform distribution of water and improves crop productivity – can can save 933 million cubic metres of irrigation water every year.

Zero tillage and laser land levelling in wheat farms also help reduce greenhouse gas emissions. A 2014 CCAFS analysis showed that laser land levelling in Haryana helped increase the average yield of wheat by 285 kg per hectare and of rice by 322 kg per hectare, compared to traditional land levelling. It is estimated that the technique is being used in 0.54 million hectares in Haryana. It also helped reduce irrigation time by 10-12 hours each cropping season in wheat and 47-69 hectares in rice, besides saving one billion cubic meters of water every year. The levlling needs to be done once every three or four years.

One of the key approaches in turning the Karnal villages ‘climate smart’ is crop diversification from rice-wheat systems to include shorter-duration varieties and switching to maize, pulses and oilseeds that require less water.

A similar approach is being adopted in India’s eastern state of Bihar. “We target technologies according to farmers’ typology, including land size, socio-economic status and resource availability. In Bihar, we are additionally planting seeds on raised beds with furrows in between. This offers a dual advantage: the furrows can be drained of water in case of floods and can be watered during drought,” Jat told indiaclimatedialogue.net.

The project has introduced high-yielding, stress-tolerant maize varieties and advised planting pigeon pea on the bunds around the fields and farmers’ backyards, as a pulse crop that improve protein intake and nutrition security in the area.

Farmers like Inderjeet Singh Mann in Birnarayana village of Karnal have to make a tough choice between less water and labour demand for maize versus higher market price for rice. Mann prefers rice, but is making adjustments by switching to shorter-duration varieties of the crop.

“As the water level keeps going down, especially when there is no rain, we will have no choice but to replace rice with maize,” says Vikas Choudhry, a farmer in Taraori village. He took to zero tillage four years ago and direct seeded rive five years ago.

Fellow farmer at Taraori Manoj Kumar Munaj agrees. “Earlier we had a lot of rain. But now with climate change and declining water levels both due to warming and groundwater extraction, we have started to grow more maize,” he says. Rice crops need to be watered two to three times a week, whereas maize requires watering once in about a fortnight.

About 20 of the 100-odd farmers in Taraori have formed a cooperative to pool money and buy a laser-assisted land leveller that is rented out at Rs 600 an hour.

An innovative component of the project is the use of information and communication technology (ICT) tools to disseminate ‘climate smart’ agro advisories to farmers, by sending voice and text SMSes in local languages to farmers’ mobile phones. The messages include weather forecasts and recommended actions, information on pests, seed varieties and techniques for conservation agriculture.

In Anjantalli village, Ruby Mehla, has taken the lead in using the SMSes to involve herself in decision making with her husband about farm activities and disseminate the information to other women. “In the past, I did not think there was so much thought and understanding in agriculture. When I listen to the messages I realise now how every small detail can help a farmer,” she said.

By T.V. Padma
People in the middle ranges of the Indian Himalayas are the most vulnerable to climate change and they are finding it difficult to adapt to the changed weather patterns
END_OF_DOCUMENT_TOKEN_TO_BE_REPLACED

By Abha Indurkar
Since women interact with their immediate environment more than men, they have better knowledge and understanding on the need to adapt to the changing climate
END_OF_DOCUMENT_TOKEN_TO_BE_REPLACED

By Soumya Sarkar
Billions of people will suffer from water stress and deprivation that is aggravated by climate change, the United Nations said in a report on World Water Day
END_OF_DOCUMENT_TOKEN_TO_BE_REPLACED

By Joydeep Gupta
Despite the drought gripping this region of India, one village in Marathwada in Maharashtra has flourished by growing grapes using innovative water saving methods
END_OF_DOCUMENT_TOKEN_TO_BE_REPLACED

By Joydeep Gupta
Even six years after the Warsaw International Mechanism for Loss and Damage was established, there is little hope for getting funding for climate disasters
END_OF_DOCUMENT_TOKEN_TO_BE_REPLACED