Despite years of effort, the marble façade of the Taj Mahal keeps getting a dirty brownish-yellow due to air pollution. Researchers have now identified the pollutants responsible – exactly the same ones that are implicated in global warming and also cause a pall of smog over most of northern India every winter 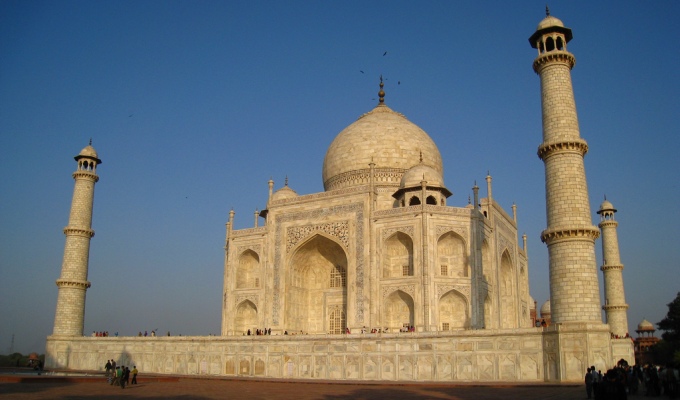 Researchers have pinned the responsibility on black carbon, light-absorbing brown carbon and dust for yellowing of the Taj Mahal. (Image by Francisco Martins)

American and Indian researchers have identified, for the first time, which pollutants are responsible for discolouring the marble façade of the Taj Mahal and turning it brownish-yellow.

In experiments lasting over a year, the researchers found that airborne particulate matter (PM) samples contained high levels of light-absorbing particles that have damaged the surface of the “miracle in marble”, one of the Wonders of the World and UNESCO World Heritage site.

Academics from the Georgia Institute of Technology and University of Wisconsin with IIT-Kanpur (IIT-K) and the Archaeological Survey of India (ASI) detected these pollutants and published their findings online in the Environmental Science & Technology Journal in the US in December.

Since the 1970s, experts have believed that airborne pollutants have been defiling the face of the monument, but were unable to pinpoint the culprits. Now, the researchers have pinned the responsibility on PM which includes black carbon, light-absorbing brown carbon and dust.

“This is the first study that clearly connects air pollution, and the specific pollutants responsible, for the discolouration of the Taj. There were mentions of air pollution influencing the Taj but nothing scientifically rigorous,” Mike Bergin of the Georgia Institute of Technology, the lead author, told indiaclimatedialogue.net.

“To my knowledge this is the first study that clearly identifies the pollutants that are causing discolouration,” corroborated S.N. Tripathi of IIT-K.

The researchers write: “Both organic carbon and dust have the potential to preferentially absorb solar light in the blue region of the spectrum, which can give the atmosphere a brown hue and has thus been dubbed the Atmospheric Brown Cloud.”

“I think the same components of air pollution that make the air brown are making the Taj Mahal brown. These are particles composed of organic compounds that have a brown tint (that we call brown carbon), black soot particles [black carbon], and dust,” Bergin told indiaclimatedialogue.net.

The team erected air sampling equipment around the Taj. In the filters, they found the harmful particles which were believed to come from cooking with wood and dung in open stoves, as well as automobile fuels, brick-making, trash and farm residue burning and vehicle exhausts.

It refined a theoretical model which demonstrated how the surface of the marble façade – the building itself is made of stone – could reflect light when brown and black carbon particles were applied to it. These predictions matched the actual findings at the monument.

“We fundamentally showed how these particles change the colour of the surface,” Bergin said.  “We hope to share this model with others who could use it to determine how urban and natural environments are changing colours due to particulate pollution.”

According to Tripathi, the propensity of fine dust particles to produce a brown hue is due to the presence of haematite in the PM, which is a common occurrence in north India. Haematite absorbs the blue wavelength of the spectrum.

While the absorption of blue light by small dust particles may be less than that by brown carbon, the high proportion of dust of 2 micron – larger in size and comprising 70% of the deposits on the surface – make the total absorption higher than that of brown carbon.

“We have developed a novel approach that estimates the impact of these deposited particles on the visible light surface reflectance, which is in turn used to estimate the perceived colour by the human eye,” conclude the authors.

The team’s experiments were confirmed by examining “surrogate” samples of marble suspended from the façade of the Taj. The ASI has also been adopting such an approach, without rigorous theoretical analysis, since the 1970s.

According to Bergin, “Some of these particles are really bad for human health, so cleaning up the Taj Mahal could have a huge health benefit for people in the entire region. The health of humans and the health of the Taj Mahal are intertwined.”

The researchers are now attempting to identify the sources of the pollution and prescribe corrective measures. “We are working on putting together a follow-up project to target which specific emitters most influence the air in Agra and the Taj Mahal,” Bergin told indiaclimatedialogue.net. “We are also doing some sophisticated air quality modelling of the region that tells us which general sources contribute to the PM that discolours the Taj.”

“The model allows us to put in best guesses of emissions from vehicles, biomass burning from agriculture and cooking as well as trash/refuse burning and brick kilns, and industrial emissions. But we will also need to conduct a more focused measurement study in the region to better determine the sources and source emissions areas, as well as the contribution of regions outside of Agra to the poor air quality in the city.”

Tripathi told indiaclimatedialogue.net, “The future research is still being worked out. One of the things would be to look into the contributions from regional and local sources to the pollution level in Agra and deposition on the Taj. At the local level already some steps are being taken by the Agra administration.”

Reacting to the findings, K.S. Rana of the ASI said, “We are examining the details. We will take preventive and remedial measures in the light of these findings.”

The study was supported by the Indo U.S. Science and Technology Forum, the U.S. Environmental Protection Agency (EPA) and the National Science Foundation in the US.

Concern about the discolouration of the Taj arose in the 1970s when the Indian Oil Corporation was setting up an oil refinery at Mathura, 40 km as the crow flies from Agra, where the monument is situated. There was considerable scrutiny by the government, which set up a committee to look into the threat. At the time, it was the most comprehensive study conducted in the world of the impact of pollutants on a historical monument.

One of the major decisions taken was to use only low-sulphur crude in the refinery. In 1987, a researcher partly attributed the threat to the morning dew which absorbed sulphur dioxide from lime kilns in the vicinity.

In 1998, the central government initiated a two-year Rs 220-crore ($36 million) project to clean up the air in the vicinity of the Taj. This followed strictures by the Supreme Court in response to a public interest litigation by environmental lawyer M.C. Mehta.

When the project was launched, then US President Bill Clinton said that pollution had done “what 350 years of wars, invasions and natural disasters have failed to do [and] begun to mar the magnificent walls of the Taj Mahal.”

However, in 2010, a decade after the clean-up project was supposed to be over, the Nagpur-based National Environmental Engineering Research Institute (NEERI) found that levels of pollutants such as nitrogen dioxide – which can dull the sparkle of the monument – had crossed 1996 levels, after showing a falling trend till 2002. In 2006, these levels were 30 µ/m³ (micrograms per cubic metre of air), compared to 22 µ/m³ in 1996.

“There is an increasing air pollution tendency beyond 2002 which may be attributed to rise in human and vehicular population,” said NEERI in a report to the environment ministry.

The discolouration of the Taj is attributable to local factors which are also evident in the regional meteorological phenomenon originally known as the Asian Brown Cloud. This was first revealed by the UN Environment Programme in 2001 but stirred up so much controversy, mainly in India, that it was renamed the Atmospheric Brown Cloud.

Later, however, the presence of this cloud has been universally recognised, due partly to the pioneering research conducted by Veerbhadra Ramanathan of the Scripps Institution of Oceanography in San  Diego, California.