India holds on to climate card

India strengthened its clean energy cooperation with the US at a New Delhi summit between Prime Minister Narendra Modi and President Barack Obama and agreed to hasten its HFCs phase-out, but made no commitment on controlling carbon emissions 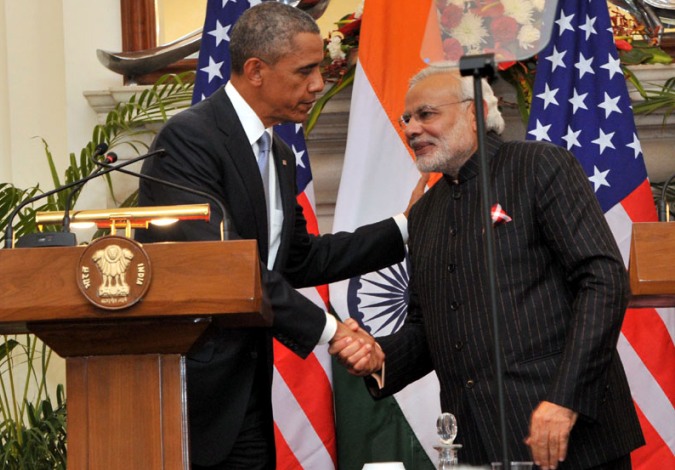 India will take more action to advance its transition to a low carbon economy, and the United States of America will help this process in a big way, Prime Minister Narendra Modi and President Barack Obama decided in New Delhi on Sunday. The US President is visiting New Delhi as chief guest in India’s Republic Day ceremony.

However, after the meeting of the leaders, there was no announcement of any specific goal by India to control its greenhouse gas (GHG) emissions. Instead, in response to a question on whether there was pressure on India in this regard in the wake of the recent US-China deal on GHG emissions, Modi said, “India is a sovereign country. No pressure from any country or any person has any effect on it.”

While India – the world’s third largest GHG emitter after China and the US – has chosen to hold on to its cards on any mitigation commitments it may make, the joint statement prepared after the summit indicated that both countries wanted a successful climate treaty at the UN meeting in Paris this December.

The statement underlined the understanding of Modi and Obama that meeting the climate challenge “will require concerted action by their countries and the international community.” The two leaders “stressed the importance of enhancing their bilateral cooperation on adaptation measures, as well as joint research and development and technology innovation, adoption and diffusion for clean energy and efficiency solutions that will help achieve the goals of transitioning to a climate resilient and low carbon economy. They also stressed the importance of working together and with other countries to conclude an ambitious climate agreement in Paris in 2015. To this end, they plan to cooperate closely over the next year to achieve a successful agreement in Paris.”

There was more substantial progress on India phasing out the use of hydrofluorocarbons (HFCs) – the refrigerant gases that affect the earth’s ozone layer. The joint statement read, “The President and Prime Minister reaffirmed their prior understanding from September 2014 concerning the phase down of HFCs and agreed to cooperate on making concrete progress in the Montreal Protocol this year.”

The two countries had already signed an agreement last November for the US to provide up to $1 billion to facilitate expanded cooperation and enhance US private sector investment in Indian clean energy projects. After this summit, Obama committed support to India’s ambitious goal to generate 100 gigawatts of solar power by 2022.

According to the joint statement, US support to India to move to a low carbon economy will include

Accelerating Clean Energy Finance: Prime Minister Modi emphasized India’s ongoing efforts to create a market environment that will promote trade and investment in this sector. President Obama welcomed India’s ambitious solar energy goals and encouraged India to continue its efforts to increase trade and private investment in this sector. President Obama conveyed the potential availability of US government official financing in this area, consistent with its policies, to support private sector involvement for those entities in contributing to India’s clean energy requirements.

Initiating Climate Resilience Tool Development: Jointly undertaking a partnership on climate resilience that will work to downscale international climate models for the Indian sub-continent to much higher resolution than currently available, assess climate risks at the sub-national level, work with local technical institutes on capacity building, and engage local decision-makers in the process of addressing climate information needs and informing planning and climate resilient sustainable development, including for India’s State Action Plans.

Demonstrating Clean Energy and Climate Initiatives on the Ground: Additional pilot programs and other collaborative projects in the areas of space cooling, super-efficient appliances, renewable energy storage, and smart grids.

Concluding MOU (memorandum of understanding) on Energy Security, Clean Energy and Climate Change: Both countries concluded negotiations on a five year MOU to carry this work forward, to be signed as early as possible at a mutually agreed upon date.

The cooperation on clean energy led to positive reactions from environmentalists. Chandra Bhushan, Deputy Director General of the New Delhi-based think tank Centre for Science and Environment, said, “We have a big challenge of securing energy needs in India and we also have a huge developmental gap. Given this, renewable energy is becoming more and more important and it reflected quite clearly in the joint statement. There is a focus on solar energy in India. While India needs the leadership of US for its ambitious targets of solar energy, there was a general recognition of India’s developmental needs among the US delegation, which is good news.”

Some environmentalists have been expressing the fear that if the US extends financial support to India for its solar energy sector, it could turn India into a market for US-made solar products while compromising India’s own solar manufacturing potential which needs a big boost. This could be in contradiction to Modi’s ‘Make in India’ campaign, these environmentalists have held.

However, Bhushan dismissed these fears and said, “There will be give and take on the market but I am quite sure that the Indian government is quite mindful of this. There have been issues earlier where the US and India had a trade row over solar panels, but the Indian government will be cautious and will keep in mind India’s need for strong research and manufacturing in the solar sector.”

Other analysts in the field of renewable energy had been hoping for more concrete results from the summit. Srinivas Krishnaswamy of another New Delhi-based think tank, the Vasudha Foundation, said, “Given the recent announcement by India of ambitious solar targets by 2022 and new initiatives including those to promote solar rooftops, I would have expected something concrete. Now let’s hope that US will show support to India in terms of technology and investments so that it not only achieves its current targets by 2022 but sets even more ambitious targets for the 2030s.”

Krishnaswamy was not worried about the lack of any specific emission control commitment by India. He said, “With its ambitious targets of wind and solar power by 2022, India is on a good trajectory of low carbon growth. There are also concerted policy efforts to ensure these targets are met with various infrastructure programmes etc. We also have this LED lighting programme and energy efficiency programme. I wouldn’t expect India to take on binding emissions control targets.”

The analyst also dismissed fears that US support could hamper the ‘Make in India’ campaign. He said, “India already has this policy in place where it is required that certain percentage of solar panels need to come from Indian manufacturers. Recently, SunEdison company of the US and Adani group from India announced that they will build India’s biggest solar panel factory in partnership in Gujarat. So I think all of us will be part of Make in India programme. I don’t see this as a threat. The real threats are low-quality Chinese panels.”

“Any kind of bilateral agreement will be to industries’ benefit but it is fine as long as it doesn’t harm Indian domestic industry. The real devil is in the details and right now we don’t know what the details are,” Krishnaswamy added.

“With a quarter of India’s population living without electricity, its efforts to address climate change need to promote economic development and alleviate poverty. Fortunately, many actions to stimulate growth can also reduce emissions.”

“The joint initiative on cities will help India to cut air pollution and protect public health. And the agreement to make further progress on phasing out HFCs is another important step to limit greenhouse gas emissions.”

Bapna forecast, “Ongoing direct engagement between President Obama and Prime Minister Modi can set the stage for a higher level of cooperation in the lead up to a global climate agreement later this year.”