India’s solar dream: does the country have enough water?

Narendra Modi’s ambitious solar energy expansion may be scuppered by lack of water, particularly in arid regions where the biggest solar farms are planned 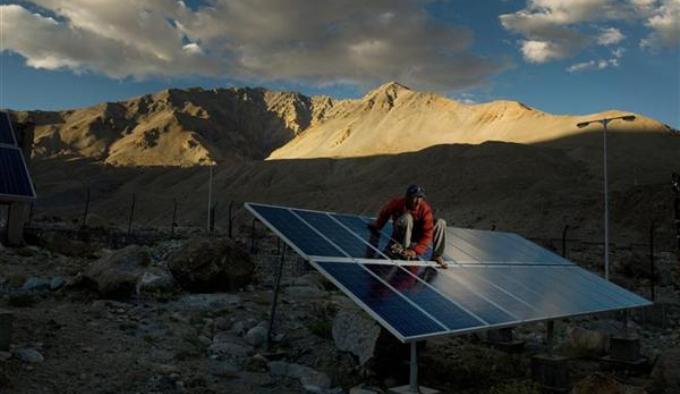 The arid region of Ladakh in the Indian Himalayas aims to produce 100,000 MW of solar power by 2050 (Image by Harikrishna Katragadda/Greenpeace)

Enthusiasm for solar energy has grown recently with the dramatic fall in prices of solar photovoltaic equipment and the global drive to switch to ‘cleaner’ energy sources.

In India, the government hopes to establish the country as a leader in solar energy. Its national solar mission set an ambitious target of 20GW by 2022 to address both the domestic challenge of energy shortages and the global challenge of climate change.

Prime Minister Narendra Modi has recently turned the spotlight on renewable energy through the ‘Make in India’ initiative and ‘REinvest’ Renewable Energy meeting in Delhi designed to attract investment and promote innovation. He has now revised the target fivefold to 100GW of solar energy by 2020.

But policies have been short on specifics and many experts are sceptical these ambitious targets can be achieved.

While many of the major obstacles facing India’s solar industry – such as the need for low cost financing and better infrastructure – have been widely highlighted, one issue has been overlooked: increasing water scarcity could pose a severe constraint to energy supplies and solar expansion in India.

As water and energy are both vital resources, India needs to assess the impact of solar expansion on local water demand and supply, especially in areas proposed for large scale expansion.

India’s solar journey so far has been riddled with challenges. Key obstacles include lack of vital infrastructure such as power and water transmission lines, lack of low-cost finance, policy uncertainties and burdensome regulatory procedures causing delays and adding costs to projects.

“There is no use investing in solar projects if the infrastructure to evacuate power to the grid does not keep pace. The Ministry of Power must provide detailed roadmaps for building new substations,” said Arunabha Ghosh, solar expert at the Delhi-based think tank, Council on Energy, Environment and Water (CEEW).

Another barrier to the large scale solar expansion is lack of solar radiation data, which leads to miscalculations of how much energy can be produced by individual projects.

These risks will need to be addressed before solar energy can become a significant part of the country’s energy mix. Solar power currently constitutes less than 1% of India’s total energy supply and will need to grow to around 10% if the newly pledged 100GW target is to be met.

Energy and Water – a solar perspective

Huge amount of water is needed to produce electricity from any source and water shortages lead to increased energy demand to pump groundwater, creating a self-perpetuating vicious cycle.

In India, the monsoon season has become increasingly unpredictable due to climate change. This has increased stress on power supply. In 2012, the world’s largest blackout in India that plunged nearly 670 million people into darkness was caused by farmers using excessive electricity to pump water to compensate for the poor monsoon season. Similarly, water shortages in 2010-11 led to a decrease in power generation by 4.4Twh.

At the same time, “79% of new energy capacity in India is expected to be built in areas that already face water scarcity or water stress,” according to a recent report from the World Resource Institute.

The water consumption of producing power from solar energy using Photovoltaic (PV) technology is a fraction of that of coal, India’s primary fuel. However, water constraints could still hamper the country’s solar development plans, particularly since the locations identified for large scale Solar PV parks are in water scarce regions. The two states with the largest installed solar projects – Gujarat and Rajasthan  – are both water stressed.

It is thus important for India to consider the implications of its solar expansion on water demand.

The problem with solar panels in arid and desert regions is that dust accumulates easily, drastically decreasing efficiency: “just one gram of dust per square metre of solar panel area can reduce efficiency by around 40%”, according to one study.

Solar panels require constant cleaning to maintain efficiency. In Abu Dhabi, solar plants have to send trucks of water every day to clean the dust using robotic arms to spray water, resulting in higher than expected costs and water usage. CEEW estimates the water requirements for operation and maintenance in India to lie between 7000 and 20000 litres per MW per wash, where panels are usually cleaned on a weekly basis (though this amount will vary with the scale and location of plants).

By not factoring in water constraints, the amount of electricity generated by India’s solar plants will be much lower.

Washing solar panels is not the only issue. The manufacturing and transportation of solar equipment accounts for almost 80% of solar PV’s water usage according to one study. Since the government hopes to establish a flourishing domestic solar panel manufacturing sector, this important aspect of solar expansion also needs to be considered.

So far, project developers have relied on cheap imports primarily from China and the US. If the ‘Make in India’ initiative establishes a domestic industry, the water footprint of solar PV will increase significantly. However, studies to analyse the life cycle water requirements for Solar PV in India remain in the initial stages.

While India has focused on solar PV so far, there are a few Concentrated Solar Power (CSP) plants under construction and in operation. CSP plants generate electricity by concentrating the sun’s rays to boil water and produce steam to fuel turbines. These use a comparable amount of water to thermal coal plants, especially due to water required for cooling. As India looks to exponentially increase its solar power with the easier grid integration that CSP plants provide, the water consumption of this expansion also needs to be considered. The current proposed CSP plants are also in areas of water stress.

Solar power could also indirectly increase water use in India’s agricultural sector, which accounts for over 80% of the country’s total water withdrawals. The growth in solar power has made solar PV water pumps accessible to farmers. As the operational costs of these pumps are very low there are risks associated with excessive water withdrawal. The lack of foresight surrounding this issue is clear in Punjab – the ‘grain bowl’ of India. Energy demand to pump groundwater in Punjab has increased as the region faced severe drought in 2014.  While the region’s ground water resources are depleting alarmingly fast, there is also large investments in solar expansion in the area.

The symptoms of poor resource management are evident throughout the country as various states often cut power to deal with water scarcity. The National Water Mission (NWM), launched under the National Action Plan on Climate Change (NAPCC), recognises the need to address these water-energy links. The plan however has been criticised for giving primary attention to the energy sector and side-lining water management by not setting concrete targets. Studies have shown India will have a shortfall of 25% of its water demand by 2030, if current trends continue.

There are some positive examples that show solar PV can help conserve water if used in innovative ways. In Gujarat, for example, solar panels have been installed on top of canals to decrease water loss from evaporation. Prime Minister Narendra Modi encouraged innovative use of solar to address energy demand and water scarcity issues in his speech at the REinvest conference in Delhi. The primary focus, however, remains on large scale solar plants.

An initiative to address the water-energy linkages in the newly formed solar sector in India could be the first step towards meeting the country’s rising energy demands in a sustainable manner. Such an approach would also guide further innovation and support  alternative technology options such as dry brushing (cleaning panels without water) at an industrial level.

The article was first published in thethirdpole.net

By Venkat Viswanathan, Shashank Sripad
There is a major push in India and China to drive adoption of electric two-wheelers, with India providing financial incentives for 86 different models of electric scooters and motorcycles
END_OF_DOCUMENT_TOKEN_TO_BE_REPLACED

By Ranjan K Panda
At a time when the world is trying to find ways to fight climate change, indigenous communities living in and around forests have a big role to play to mitigate its devastating impacts
END_OF_DOCUMENT_TOKEN_TO_BE_REPLACED

By Joydeep Gupta
Cooling gases that are warming the world have to be phased out of India, but the industry is doing little about it in the absence of a long-term policy
END_OF_DOCUMENT_TOKEN_TO_BE_REPLACED