The monsoon in South Asia is impacted five times more severely by deforestation in the tundra than in the tropics, says a new study 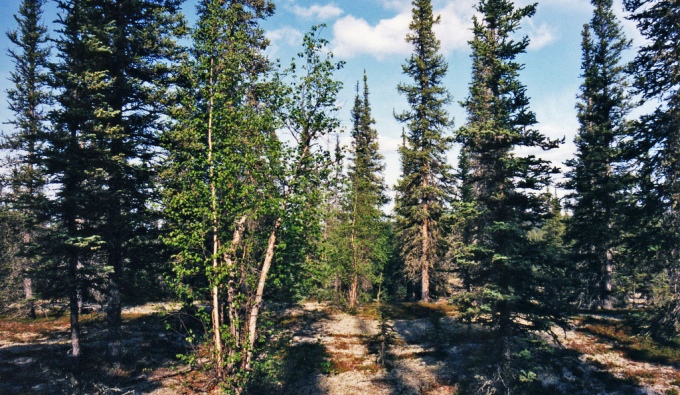 Large-scale deforestation in mid- and higher latitudes of the northern hemisphere impacts the South Asian monsoon far more than local deforestation does, and could cause an 18% decline in monsoon rains over India, a new study says. It urges inclusion and careful evaluation of the effects of remote forest loss in climate change mitigation strategies.

Researchers at the Centre of Atmospheric and Oceanic Sciences (CAOS) at the Indian Institute of Science (IISc), Bangalore, used a three-dimensional computer model to study the impacts of deforestation in three zones – tropical belt, mid and high latitudes – on the South Asian monsoon.

It says, “The South Asian Monsoon region is affected the most, with 18% decline in precipitation over India” due to remote forest loss, as compared to tropical deforestation that caused only a 4% decline in rainfall.

“Our results indicate that any comprehensive assessment of afforestation/reforestation as climate change mitigation strategies should carefully evaluate the remote effects on monsoonal precipitation alongside the large local impacts on temperatures.”

Land use change is considered an important driver of climate change.  The IISc report points out that historically, by the 1750s, 6-7% of the global land surface had been deforested for agriculture, a trend that continues with large-scale deforestation and conversion of forests into crop lands and pasture lands.

Also, while the impacts of forest loss on increasing carbon dioxide, a greenhouse gas with warming potential that leads to rising temperatures are well-studied, what is less understood is how forest loss influences rainfall patterns, says Govindasamy Bala, professor at CAOS and one of the authors of the report that was published in the Proceedings of the National Academy of Sciences, Bangalore.

“When a climate effect of deforestation is estimated, only the amount of carbon dioxide released in the atmosphere, a biogeochemical effect, and its warming potential is calculated,” says Bala. “The changes to surface characteristics such as reflectivity and plant transpiration (biogeophysical changes) and their effect on climate are not accounted.”

“Rainfall is a challenging climate variable because it is not only affected by the amount of water vapour in the atmosphere, but also by converging circulations of moist air,” he adds.

Bala’s colleagues tried to understand the effects of forest loss on precipitation, by analysing the shift in a key area in the atmosphere called the “inter tropical convergence zone” (ITCZ) – a band that encircles the earth near the Equator, and comprises converging trade winds and rising air. The rising air produces high cloudiness, frequent thunderstorms and heavy rainfall. The ITCZ influences the South Asian monsoon too.

They found that removal of forests in the high latitudes in the northern hemisphere causes less absorption of the sun’s radiation and reflects more sunlight back into space, creating a cooling effect in the area. The cooling causes an increase in northward heat transport across the equator.

The sresults are significant for the United Nations Framework Convention on Climate Change (UNFCC) and its Kyoto Protocol whose key objective is to arrest increasing concentrations of greenhouse gases in the atmosphere.

The Kyoto Protocol suggests avoidance of deforestation, restoration of degraded forests, afforestation and reforestation as carbon sequestration strategies to mitigate climate change. One of the issues for discussion during IPCC negotiations is of suitable mechanisms to monitor and evaluate REDD (reducing emissions from deforestation and forest degradation) and REDD+ projects.

The study points out that it is the ‘biogeochemical’ effect – that is the warming potential of greenhouse gases – which is accounted for in these strategies. But the ‘biogeophysical’ effects, such as albedo (fraction of solar energy reflected from the Earth’s surface) and rates of evaporation and transpiration from trees that could offset or enhance the biochemical effects, are not included, it says.

It also says that several modelling studies have highlighted the importance of these biogeophysical effects for local and global temperature change. The results further indicate that the assessment of remote effects from such changes “could be more important than local effects when impacts on precipitation in the monsoon regions are considered.”

Douglas Sheil, a researcher at the Norwegian University of Life Sciences (UMB), who was earlier with the Centre for International Forestry Research (CIFOR), Indonesia, and continues with CIFOR research projects, says, “This study tells us about the behaviour of a model. This is valuable in telling us how things could work.”

But, adds Sheil, “We would urge a much greater emphasis on ensuring the behaviour and processes surrounding forests and their influence on climate are fully captured in such models before we would rely on such models to characterise the effects of forest cover change in the real world.”

In April 2014, Sheil’s studies, published in Trends in Plant Science, showed that forest cover has a major role in maintaining the rainfall pattern through evaporation and transpiration cycles; and cutting trees reduces this cover, which in turn alters the cycles and hence disrupts the rainfall pattern.

“Our work does not invalidate REDD or REDD+ but it just points out that the accounting used in these schemes is inadequate to evaluate climate benefits of afforestation,” says Bala.

“Our research implies that a holistic integrated assessment is necessary for an improved assessment of REDD. Such a comprehensive assessment should take the changes in reflectivity, plant transpiration and atmospheric circulation into account. We are probably still long way from coming out with a simple metric that can take all these changes into account. Hence, our work may not immediately impact the current IPCC approach. Nevertheless, we should be cautious and aware of the limitations of REDD and REDD+.”