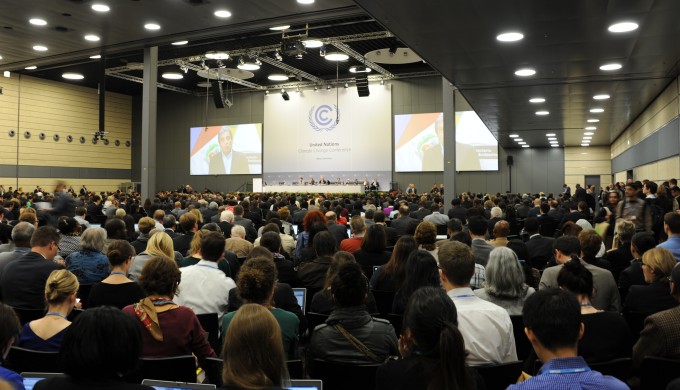 The latest round of UN climate talks have made slow progress on refining a negotiating text for the Paris summit in December, the focal point for efforts to agree curbs on greenhouse gas emissions in developed and developing countries.

Despite two weeks of talks at an interim meeting in the German city of Bonn, most of the contradictory proposals that littered the previous 90-page document remain, meaning that the next few rounds of talks in August and October will have to shoulder the burden of distilling a negotiating text by December.

“It’s like having a baby, sometimes you don’t know exactly when the baby will be born,” she told a press conference.

Tubiana added: “Everyone is feeling the frustration, but we should not be frustrated or disappointed because these are really necessary conditions for Paris.”

Familiar disputes blocked progress at the mainly technical meeting in Bonn, which was being held around 500km away from this week’s G7 summit in Bavaria.

But in Bonn rich nations failed to give greater clarity on how rich economies will deploy US$100 billion of climate finance a year from 2020.

Major rifts also remained on the legal basis of a future agreement, and the extent that large fast-developing economies such as China and India will be accountable for planned curbs on GHG emissions.

There were breakthroughs on a few important elements though, including an unexpected resolution of technical issues related to avoiding the destruction and degradation of forests, making it more likely that a protection scheme can be agreed in Paris.

Although many NGOs said they remained hopeful that a meaningful deal can be done in Paris, they expressed disappointment at the slow pace in a week that G7 leaders for the first time agreed that emissions from fossil fuel use should be phased out by the end of the century.

“This week strong signals were sent for ambitious climate action from outside the negotiations, but they did not inspire a faster pace in Bonn,” said Jennifer Morgan, global director at the World Resources Institute.

The two co-chairs of discussions on a future negotiating text will in July present a ‘tidied-up’ version of a text that retains many of the elements from a previous UN meeting in February.

Meanwhile, France will next month present greater detail on proposals for climate finance, an issue that will likely need to be resolved for the Paris summit to deliver a deal.

“The text which will make up the Paris agreement is like a lens we’re all looking through to a safe and secure world.  At the moment it’s a bit grubby and hard to see through. The co-chairs of the negotiations on the Paris agreement need to go away and give it a good clean so that leaders can see what needs to be done,” said Mohamed Adow, senior climate change advisor at Christian Aid.

The Bonn meeting also failed to bridge distrust on the extent to which developing countries should commit to future emissions cuts in national climate plans that all countries are required to submit to the UN.

China’s climate plan, or INDC in UN jargon, will likely be published next week but is not expected to include an absolute cap or provide details on whether the world’s largest emitter will regularly scale up emissions targets beyond a previously-announced 2030 peak.

The EU and other developed country negotiators want to scrutinise the extent to which developing countries cuts will be line with an overall aim to restrict growth in the global average temperatures to 2C.

However climate plans from the EU and US would also need to scaled up drastically and speedily to prevent further damage from a warming climate, say the world’s most vulnerable countries.

China’s chief negotiator Su Wei said talks about the procedure for a new UN climate regime had gone so slowly there was no time to discuss how the emissions cuts were stacking up.

“It has taken us 10 days here discussing procedural matters and we have made hardly any progress,” he told the BBC. “We cannot add any more items to the agenda to be discussed before Paris.”

The article was first published in chinadialogue.net.

By Jai Kumar Gaurav, Akshar Bhatt, Kundan Burnwal
A long-term low-carbon economic strategy can help a country to reduce policy uncertainty, which would help investment decisions by both the public and private sectors
END_OF_DOCUMENT_TOKEN_TO_BE_REPLACED

By Navroz K Dubash
While an Indian net-zero announcement may add to the international momentum, it also risks being a hollow pandering to global pressures at best
END_OF_DOCUMENT_TOKEN_TO_BE_REPLACED

By Soumya Sarkar
The United States under President Joe Biden has re-entered the Paris climate agreement, providing a renewed impetus to act on the world’s deepening climate crisis
END_OF_DOCUMENT_TOKEN_TO_BE_REPLACED

By Joydeep Gupta
India is meeting its current unambitious pledge, but it is still pushing coal and failing to protect natural resources needed to protect people from the worst impacts of climate change
END_OF_DOCUMENT_TOKEN_TO_BE_REPLACED

By Lou del Bello
Developed countries are taking action to reduce their own carbon emissions, but they are not coughing up enough money to help vulnerable poorer countries do the same
END_OF_DOCUMENT_TOKEN_TO_BE_REPLACED

By Joydeep Gupta
US president-elect Joe Biden has strong popular backing to deliver action on climate change, which could provide impetus for countries worldwide to follow suit
END_OF_DOCUMENT_TOKEN_TO_BE_REPLACED

By Soumya Sarkar
The planet is losing biodiversity at an unprecedented rate, posing grave danger to human health and prosperity, the UN Convention on Biological Diversity warned in its flagship report
END_OF_DOCUMENT_TOKEN_TO_BE_REPLACED
Share This