A tale of two cities: Is Mumbai hotter than Delhi?

A new study shows Mumbai has more heat islands than Delhi, perhaps due to higher concentration of high-rise buildings in some areas. But not all scientists are convinced by the study 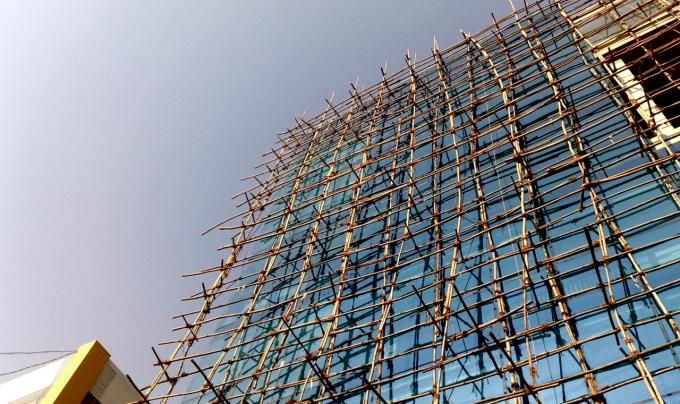 A study shows that Mumbai fares worse than Delhi as it has more urban heat islands, despite being located on the coast and registering lower maximum temperatures. (Image by Satish Krishnamurthy)

For decades, Mumbai has challenged Delhi by claiming to be the country’s most developed metropolis.

The commercial capital steals a march over the nation’s capital in density – it tops the world’s list with 29,650 persons per square km; Kolkata comes second globally.

However, by an important environmental comparison, Mumbai fares worse than Delhi.

It has more urban heat islands, despite being located on the coast and registering lower maximum temperatures.

The difference between these heat islands and other parts of the city can be as much as 13 degrees Celsius, according to a new study by Aparna Dwivedi, M.V. Khire and B.K. Mohan at IIT-Bombay’s Centre for Studies in Resources Engineering.

Kurla and Andheri East figure among the warmest areas. High population and building densities, concrete buildings and roads and the distance away from the sea are to blame.

The authors find that unplanned and uncontrolled urbanisation has contributed to this anomaly.

“The corresponding reduction of natural vegetation and water bodies results in higher temperatures in urban areas which may seem to be localized effect but in long-term it may contribute to the global heat.”

“Similar studies have been conducted elsewhere in the world in densely populated cities, like Hong Kong. As an architecture and urban design researcher, the lesson to be drawn from the study is to design better buildings, and avoid excessive use of glass and cement,” Dwivedi told indiaclimatedialogue.net.

Temperatures can vary from 36.27 degrees Celsius in Andheri, inland near the airport, to 23 degrees at the same time in the Sanjay Gandhi National Park, which occupies 104 sq. km, and is the city’s green lung. 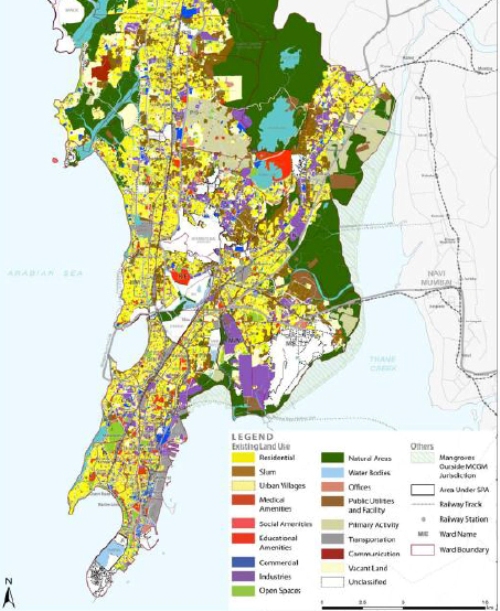 However other scientists point to flaws in the study and believe that an “urban heat island intensity” of 10-13 degrees is not possible. Neither can the park have a temp of 23 degrees Celsius during summer, when nearby Andheri is at 36.

For the study, land surface temperatures were calculated by using satellite data which measured reflectance of light, known as the Normalized Difference Vegetation Index (NDVI).

“There is a drastic change in temperature in the morning around 5.30 am between built-up and vegetation areas of Mumbai,” the authors state.

Temperatures are related to land use and population of the city, they add. “This might result in bigger issues of changing rainfall patterns and intensities, threatened biodiversity and consequently hampered sustainable development.”

The IIT-B study is corroborated by a comparative study by Delhi University scientists.

The capital comprises both urban and rural areas.

Aakriti Grover, a research scholar, and Ram Babu Singh, who heads the geography department of the Delhi School of Economics, show that Delhi has nearly 300 sq. km of green cover, compared to Mumbai’s 122 sq. km.

The Ridge forest and Yamuna river play a role in lowering temperatures.

The Yamuna records a minimum temperature of 23 degrees Celsius where it is deepest. As the water composition changes, with solid waste and sand, the temperature rises to nearly 28 degrees.

It is able to store and transfer heat. Since it passes through six districts, it acts as a heat moderator, just like the drains of Delhi.

The surface temperatures in the capital vary from 23 to 40 degrees Celsius. In that respect, the two cities are similar, but they differ over heat island locations.

The hottest parts of Delhi are in the west, especially the south-west. The lower temperatures are in the centre and south, and moderate in the north and east.

Mumbai records lower temperatures on the peripheries and coast, but is “highly heated in the centre”, the IIT-Bombay study shows.

“There are number of (other) studies on Indian cities e.g. Surat, Ahmedabad and Chennai,” Grover told indiaclimatedialogue.net.

“Mumbai is worst affected due to its high-rises and very low vegetative cover. In view of increasing urbanisation, Delhi and Hyderabad are likely to go to the way of Mumbai. But these cities don’t have (so many) high-rises presently.”

Raghu Murtugudde from the University of Maryland told indiaclimatedialogue.net, “Humidity adds to the heat index and many pollutants are hygroscopic so they get heavier with humidity. I think it is the humidity that makes the Mumbai heat island much worse.”

“Urban heat island research in the US mostly looked at the coastal vs interior urban islands from the perspective of impacts on storms. But for Mumbai, seasonality has to be considered while compared to Delhi or any other place. Let’s say you go from Powai in the suburbs to Andheri or Vikhroli. The temperature will basically be the same because temperatures get homogenized on fairly large scales by winds and the heating is basically similar except for small differences in urban heat island and so on.”

“But you can have heavy rain in Powai but no rain in Andheri or Vikhroli because rain is caused by instabilities and fronts and moving storm systems or thunderstorms and these can happen on very small scales.”

Murtugudde added, “Think of a pot in which you are making popcorn. The pot is heated to the same temperature but popcorns pop in different locations randomly. Rainfall is always like popcorn popping even though the scales can be sometimes large in monsoon systems.”

Talking about the IIT-Bombay study, Murtugudde said it “needs to be reaffirmed since high temperature contrasts in such short distances have not been reported before. Mumbai tends to have very large precipitation [rainfall] gradients but this is expected from the short decorrelation scales of precipitation. Some local temperature inversion or some other factor may generate temperature gradients but it
needs to be explored mechanistically.”

“As for the surface heat island comparisons between Mumbai and Delhi, we have to be careful about two things – the satellite products for temperature and vegetation are highly dependent on the so-called atmospheric corrections.”

“By the time you derive NDVI, it is only about 10% of the total signal measured by the satellite. So the humidity levels and aerosol corrections done for the products being used for deriving temperatures and NDVI may be global models which may not be valid for specific regions in India at high resolutions.”

Criticizing the IIT-Bombay study, Murtugudde said, “I suspect the statement that heat islands are not significant over Delhi but are strong over Mumbai. I would also check the atmospheric heat islands and compare aerosol and humidity levels even if crudely to make an estimate of the errors in the derived quantities. And use some weather station data to confirm the results instead of relying totally on satellite data.”

A third study on a related index also puts Mumbai in a bad light – literally – in relation to Delhi. Surprisingly, again, very recent research by the Indian Institute of Tropical Meteorology (IITM) has found that Mumbai is exposed to more ultraviolet (UV) radiation than the capital.

In a pilot study done in the latter half of May this year, as many as 13 of the 15 days in the city were in the “high-risk” category, with an average of UV index of 8.2.

The UV index measures the amount of harmful radiation in sunlight reaching the earth’s surface at a given location — where 0 indicates no risk, 1-4 indicates a low risk of overexposure and above 10 signifies an extreme risk.

Any index between 7 and 10 exposes people who are advised to avoid direct exposure to the sun. 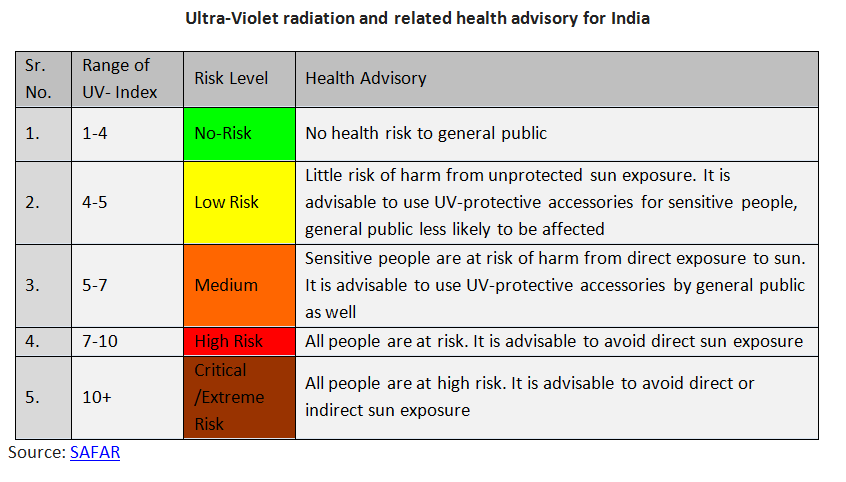 Gufran Beig, who conducted the IITM study and also heads SAFAR – System of Air Quality & Weather Forecasting & Research – for the Earth Sciences Ministry, warns, “Overexposure to the sun’s UV radiation can cause immediate effects, such as sunburn; and long-term problems, such as skin cancer and cataracts.”

It also causes “changes in cells of the skin, fibrous tissue and blood vessels leading to premature skin aging… Another long-term effect is an inflammatory reaction of the eye.”

He finds that UV radiation is high near water bodies and sand because there is more reflection than absorption of solar radiation.

What is more, Mumbai is near the equator and “more vulnerable than Delhi and Pune because it is surrounded by the sea and urban heat islands are forming because of dismal greenery,” says Beig.

“There are variations in Mumbai’s landscape,” according to Beig, “with some areas close to the sea, some with green spaces and some barren. We want to record UV radiation to assess the situation.”

According to Abdul Wadud of the Ranchi-based Birsa Agriculture University, UV rays are of three types – A, B and C. UV-C gets filtered due to the ozone layer, while A and B reach the earth’s surface.

Murtugudde told indiaclimatedialogue.net, “It is true that UV-B can cause problems when it rises above the threshold. UV-B is naturally higher during summer since more radiation is coming in and during the pre-monsoon, India sees peak surface radiation due to lack of clouds.”

“But it is totally erroneous to say that UV contributes to warming. UV impacts are mostly in terms of skin cancer and other damages to the DNA itself. Despite our high melanin content, we can be burned by high UV-B.”

The climate scientist added, “I suspect the pre-monsoon activities in the farm may be a big factor for heat strokes and deaths. Day-by-day variations of UV have to be put in the context of the seasonal peaks since daily variations can be simply due to weather related filtering at the surface level.”

“Any radiation that comes to the surface is also affected by humidity content and dust, etc. So within the summer peak, we will have spatial variability in surface UV-A and UV-B levels.”

By Steve Cole, Erin Guiltenane
In the largest-ever study of glacial lakes, researchers have found that the volume of water in these lakes worldwide has increased by about 50% since 1990
END_OF_DOCUMENT_TOKEN_TO_BE_REPLACED

By Soumya Sarkar
The planet is losing biodiversity at an unprecedented rate, posing grave danger to human health and prosperity, the UN Convention on Biological Diversity warned in its flagship report
END_OF_DOCUMENT_TOKEN_TO_BE_REPLACED

By Soumya Sarkar
The chance of sudden, catastrophic river flooding in the western Himalayas has doubled as climate change leads to an increase in extreme rainfall events
END_OF_DOCUMENT_TOKEN_TO_BE_REPLACED

By Olive Heffernan
With a range of marine geoengineering field trials moving forward, attention is turning to how research and eventual deployment should be governed globally
END_OF_DOCUMENT_TOKEN_TO_BE_REPLACED

By Bhasker Tripathi
Implementation of the clean air plans for India's cities can work if there are legal mandates, clear targets and accountability, coordination and sufficient funding
END_OF_DOCUMENT_TOKEN_TO_BE_REPLACED

By Birsha Ohdedar
India should rewrite outdated, colonial laws and empower local people in the Sundarbans so that embankments to keep out the sea work for communities and nature
END_OF_DOCUMENT_TOKEN_TO_BE_REPLACED