Some large IT companies in India are taking the lead to reduce their carbon footprints by enabling their employees to commute by public transport, without the usual delays, discomforts and dangers 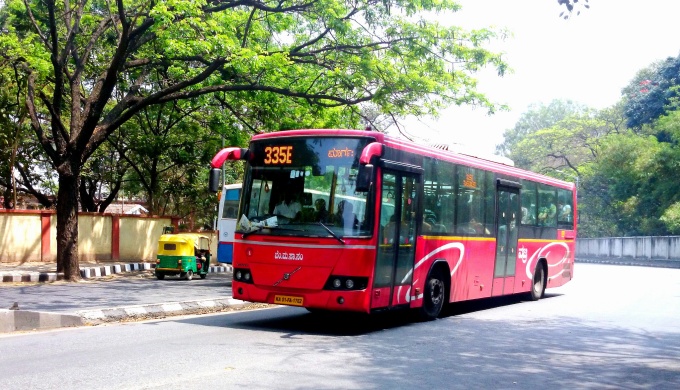 Some IT companies are promoting the use of public transport by their employees to cut carbon footprint. (Image by Ramesh NG)

The $8.7 billion company – with clients in 50 countries – is already working to halve its per capita electricity consumption from its 2007-08 levels and source all its power from renewable resources by 2018, according The Climate Group, a global non-profit.

Ramadas Kamath, Executive Vice President and Head of Infrastructure and Sustainability at Infosys, said: “We are working towards building a clean energy future. Expanding the share of renewables is key to addressing the chronic energy crisis our country is facing today. By taking the first step towards 100% renewables, we want to lead the way in creating a sustainable future and bring about an energy transformation in India.”

During 2015, Bengaluru-based Infosys met 29% of its electricity needs – about 72 million units – for its offices across India through renewables. During the same period, it generated over 2,911 MWh of electricity through its onsite solar photo-voltaic installations across India.

In May, Infosys also became the first Indian company to join RE100, a global platform for major companies committed to 100% renewable power.

RE100 is led by The Climate Group, in partnership with CDP, a global alliance for driving sustainable economies. It works with the support of the International Renewable Energy Agency (IRENA).

CDP was formerly known as the Carbon Disclosure Project, before it added programmes on water and forests. It works with corporations in India.

Infosys plans to offset the 370,000 tonnes of carbon dioxide that employees emit every year by commuting by car or two-wheelers and by catching flights.

The project is especially important in a city whose work force is growing by leaps and bounds. According to a recent report, 264 square feet of built-up space was added in Bengaluru every minute between 2006 and 2012. Given the city’s notoriously bad public transport, most employees are forced to travel by their own vehicles.

To offset such emissions, Infosys will spend Rs 70 crore this year on installing solar panels in villages, thereby cutting down on villagers’ smoky fuel – wood or kerosene.

It will also set up biogas plants – a proven, small-scale and site-specific technology that has fallen out of favour due to the emphasis on solar and wind energy.

Kamath said that its programmes were in sync with guidelines issued by the UN and other agencies. These would have the maximum social impact and were subject to audit by international bodies.

Asked whether it wasn’t easier for Infosys, being in IT, to become carbon-neutral than companies which are into manufacturing or infrastructure, Damandeep Singh, India Director of CDP, told indiaclimatedialogue.net, “While companies in the manufacturing sector may have higher emissions, the IT sector is still carbon-intensive and businesses operating here have much to do to become low-carbon.”

“India’s complicated laws also don’t make it easy for companies to procure renewable energy (RE). Infosys’ commitment will inspire other companies, within IT and other sectors, to think about how to make this switch.”

By the same token, being web-savvy, isn’t the company more amenable to organising teleconferences and the like to cut down on travel?

“Many of India’s top corporates now use teleconferences and webinars to cut down on travel and improve efficiency,” Singh replied. “However, according to Greenpeace, IT-related global emissions are now equivalent to the aviation sector. The IT industry has to grapple with issues like servers and data centres and how to keep them at best temperatures, besides ensuring that their buildings are appropriately designed.”

“An increasing number of businesses are now striving towards low-carbon or carbon-neutral goals, including through offsets. CDP encourages companies to accurately account for their gross emissions and take appropriate measures to reduce them before considering offsetting. The businesses which are committing to procure 100% of their energy from renewable sources are helping to drive down their emissions and drive up corporate renewable power consumption.”

According to the CDP India head, “The project with Infosys is under the Road to Paris initiative which has six components in all. We are conducting workshops with companies to explain the concept and to get more to sign up. As of now Hindustan Construction Co (HCC) and Wipro —another  major IT company in Bengaluru — have also signed up to different initiatives.”

P.S. Narayan, Vice President and Head of the Sustainability Programme at Wipro, told indiaclimatedialogue.net, “We reduced our operational emissions footprint by 60%, amounting to more than 80,000 tonnes between 2010 and 2015. We now are setting up targets till 2020 and beyond till 2050. RE and energy efficiency are the two cornerstones of our greenhouse gas reduction programme and will continue to be so.”

Narayan added, “The decisions on renewable energy targets have to be based on several external factors including the regulatory environment and supply-side dynamics. In India, the situation is more complex as electricity is eventually a state subject.”

“We are also carefully evaluating offset programmes to ensure that projects are sustainable in the long run and do not have other adverse impacts. Therefore, while at Wipro, our goal setting on RE will be ambitious, it will be informed by a detailed assessment of how we think the RE scenario will unfold in India over the next few years.”

Damandeep Singh sidestepped a query as to how HCC, which has constructed the Bandra-Worli Sea Link (BWSL) in Mumbai – which promotes commuting by car – and has also built Lavasa, a greenfield township in a forested valley, could figure as of one of the 119 companies in the world in CDP’s Road to Paris initiative.

This commits businesses to caring for the climate, in the long and winding road to the UN climate convention in Paris this December, but it also gives rise to the suspicion that CDP permits some companies to ‘greenwash’ their image by signing up for the arduous journey.

Sandeep Sawant, HCC’s General Manager Corporate Communications, told indiaclimatedialogue.net that it was only the contractor for the BWSL – the decision to build it was taken by the government. HCC was not claiming it was reducing emissions in BWSL’s operations.

Vikram Tanwer, HCC’s Manager Corporate Communications, told indiaclimatedialogue.net that it has been utilizing a variety of power conservation measures to lower energy usage and reduce its environmental impact.

It conserved energy through use of load sharing systems in diesel generator sets, automatic power factor controller panels, starters for crusher motors and energy-efficient motors in gantry cranes. It has reduced the use of cement by 22,612 tonnes, which has also generated 22,612 fewer tonnes of carbon dioxide emissions – each tonne of cement produced emits an equivalent tonne of carbon dioxide. This has saved the company Rs 142 crore.

Meanwhile, a handful of Indian businesses are taking the initiative to implement transport demand management (TDM) strategies, according to two Indian bloggers from the Washington-based World Resources Institute, which has offices in Bengaluru, Delhi and Mumbai, in TheCityFix.

These strategies have been especially common in IT, given the availability of information — such as employees’ origins and destinations, duration and frequency of trips — for designing optimal transit and carpool routes.

Some initiatives have included providing employees with commuter subsidies for public transport or carpooling. Other businesses have experimented with company buses that transport workers from nearby metro stations to offices, providing much-needed “last-mile connectivity”.

As many as 30-50% of the targeted employees have switched from cars to public transport. Employees are more productive due to shorter commutes, and bus and other public transit subsidies are much cheaper compared to private company buses.

Wipro worked with the Bengaluru Metropolitan Transport Corporation (BMTC) on specific routes to provide quality bus services to its employees and other transit riders. This initiative reduced employee emissions by almost 16% in the first year of implementation.

Another example is the “I-Travel Smart” initiative of Genpact — another global IT company – in Gurgaon, next to New Delhi. Genpact has reduced travel by about 1.2 million km annually and has saved about 335 tonnes of carbon dioxide emissions.

It provides a free shuttle service from nearby metro stations to all Genpact sites. This is aided by a commuter guidebook for all employees with alternative transport options; preferred parking locations for those who choose to carpool; and designated bus services in partnership with Haryana and Delhi transport corporations as well as bus manufacturer Volvo.

In May, the Business and Climate Summit in Paris mobilized 25 global business networks representing over 6.5 million companies from more than 130 countries to pledge to lead the transition to a low-carbon, climate resilient economy by developing solutions. In India, some large IT companies are taking the lead.

By Joydeep Gupta
Despite the serial disasters of pandemic, cyclone and locust attack, India’s economic stimulus package continues with its inefficient short-term thinking, although there is no shortage of viable alternatives
END_OF_DOCUMENT_TOKEN_TO_BE_REPLACED

By Nambi Appadurai
We have to invest in resilience-building measures, especially in health infrastructure, and weather and disease forecast systems, addressing training and adaptive capacity needs
END_OF_DOCUMENT_TOKEN_TO_BE_REPLACED

By Soumya Sarkar
The drop in global carbon dioxide emissions driven by the coronavirus pandemic could be lost once the crisis blows over, unless we shift to cleaner energy
END_OF_DOCUMENT_TOKEN_TO_BE_REPLACED

By Mandakini D. Surie
The Covid-19 pandemic has shown that universal access to water is critical to public health, sustainable development and economic growth. Our politicians must act now
END_OF_DOCUMENT_TOKEN_TO_BE_REPLACED

By Jillian Du, Robin King, Radha Chanchani
There is an urgent need to address shortcomings of social distancing and hand washing in crowded cities with unequal facilities that will help build better resilience to future crises
END_OF_DOCUMENT_TOKEN_TO_BE_REPLACED

By Parvathi Preethan, Shubham Gupta
Zero budget natural farming is gaining traction in Andhra Pradesh, but much larger financing is required for this climate-resilient practice to bring about significant change
END_OF_DOCUMENT_TOKEN_TO_BE_REPLACED
Share This