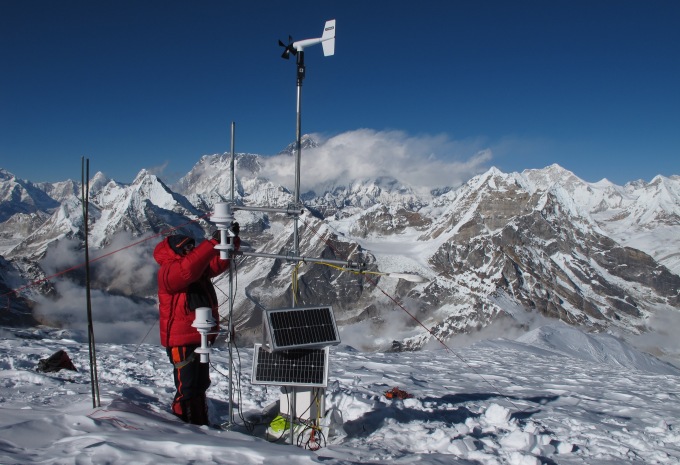 India has this year embarked on a massive programme to monitor every glacier that is 10 sq km and above in the Indian Himalayas. The ambitious project from Kashmir to Arunachal Pradesh is aimed at monitoring 267 glaciers for water availability and retreat/advance movements due to climate change.

A baby of the Department of Science and Technology (DST) of the Indian government, the project is mentored by the Divecha Centre for Climate Change(DCCC) at Bangalore’s Indian Institute of Science. The government has sanctioned Rs.5 crore (about US$783,000) for the first phase that will run for four years with the help of five partner institutions, including the Indian Institutes of Technology in Mumbai and Gandhinagar as well as the Wadia Institute of Himalayan Geology and the Snow and Avalanche Study Establishment (SASE).

Explaining the importance of the project, D.P. Dobhal, glaciology expert at the Wadia Institute, said Himalayan glaciers were the country’s ‘reserve bank’ of water. “Glaciers, which are perennial source of water, are very sensitive to climate. In fact, glaciers are a product of climate and climate change.

Advancing or shrinkage of glaciers is affected by and affects environment and, in turn, development too is affected.”

Compared to polar or Alpine glaciers, there is very little data on Himalayan glaciers as most are located at altitudes beyond 12,000-14,000 feet and are virtually inaccessible. But studying glaciers is critical not just in terms of the environment but for the potential disastrous consequences for people living downstream.

The Geological Survey of India lists 9,575 glaciers in the Indian Himalayas. Of them, 267 are over 10 sq km. Today, only four glaciers are being monitored for mass balance, any change in which is an important indicator of climate change.

The calculation of mass balance is important as it directly indicates total water availability for a given glacier system vis-à-vis snow-melt contributing to stream run-off. Glaciers contribute to regional water supplies, in turn, affecting the downstream population.

Earlier studies like the United Nations Environment Programme’s ‘Measuring Glacier Change in the Himalayas’ have thrown up more questions than answers.

“When we asked the location – which glaciers were studied etc. – there was no answer,” said P. Sanjeeva Rao, an advisor with DST.

The Intergovernmental Panel on Climate Change (IPCC) had environmentalists and glaciologists the world over in a tizzy following an erroneous sentence in the 2007 fourth assessment report that Himalayan glaciers would disappear by 2035. The colossal mistake in addition to the absence of precise data pointed policymakers and others to the need for accurate studies.

Anil Kulkarni, distinguished visiting scientist at DCCC who for three years has been heading a team studying the Gangotri glacier at the source of the Ganga river, toldthethirdpole.net, “The remote sensing method is able to check whether the glaciers are retreating or advancing and if retreating, where glacial lakes will form. But the method we are working on will give an idea if glaciers retreat, how big a lake and exactly where (size and location both) it would be formed.”

The Divecha Model, as he calls it, involves collecting detailed field data and is strategically important not just to know future water availability but also to plan for safety and security of people downstream.

Apart from regular studies calculating mass balance, the project will examine the base rock topography and estimate ice volume through detailed multi-frequencyground penetrating radar surveys. All such studies need a multi-disciplinary approach. These studies involve specialists from diverse fields of research, such as hydrology, chemistry, geology, glaciology, geo-spatial sciences and even atmospheric sciences. Hence, the idea to bring multiple institutions on board.

The project has been sanctioned for a four-year term for now, but “we are sure, this will be a long term monitoring programme”, said DST’s Rao.

Scientists will have to undertake high-altitude mountaineering trips over four months (taking into account the monsoon months and the heavy snow during winter which makes these areas almost inaccessible), braving snowstorms and avalanches.

Due to different topography across western, central and eastern Himalayan glaciers, the methods deployed will be different, Kulkarni said, listing field activities such as measuring the amount of water discharged from a given glacier, contribution of ice, snow and rain, wind speed, temperatures, velocity and also the study of glacial features.

While the new programme has enthused the scientific community, environmentalists and disaster management experts say it is too soon to be useful for the people who would be directly affected, in this case, people living downstream of potential glacial lake outburst floods (GLOF).

Scientific research is not yet being shared with people working in the field, said G.M. Dar, a disaster management expert at the Institute of Management, Public Administration and Rural Development in Jammu and Kashmir. “The key component is vulnerability assessment, followed by immediate steps for mitigation and, in case disaster strikes, rescue/relief operations. The scientific findings need to be shared with NDMA (National Disaster Management Authority) and agencies,” he said.

“Over the years, we – both the community and the administration – have learnt lessons from cyclones… mitigation measures are in place, relief and rehabilitation is done much better and, in general, we find there is much better coordination between the scientific community and the administration to help the community survive with minimum damage. This kind of implementation is in infancy stage for glaciers,” he added.

The devastating floods in the mountain state of Uttarakhand in 2013 were a case in point. Parts of the temple town of Kedarnath were literally washed away and buried under rubble, debris and sludge flowing down mainly from Chorabari, a glacial lake.

ISRO has been claiming that all its images are available online for anyone to access and interpret for application on ground. “But you can’t really expect a person from a remote hilly hamlet to access ISRO image to know if his village will be hit by floods or not,” said an environmentalist on condition of anonymity.

The National Disaster Response Force fire fights any situation after the disaster has struck, rather than working to prevent or prepare for disasters.

Anurag Gupta, joint secretary (Operations and Communication), NDMA, denies that there is any missing link between the lab and the land. “We are 24X7 in touch with agencies such as India Meteorological Department (IMD), International Centre for Integrated Mountain Development (ICIMOD), Snow and Avalanche Establishment (SASE), Central Water Commission (CWC), ISRO and NDMA among others.”

“In fact, it is an ongoing process. Data obtained from these agencies is sent to respective states four times a day.” The data pertains to floods, avalanche, heavy rainfall etc.

That is where the weak link is when it comes to glacial lake outbursts.

The article was first published in thethirdpole.net.

By Christopher Trisos, Alex Pigot
Rather than slowly sliding down a climate change slope, many ecosystems many fall off a cliff edge, negatively impacting the mostly poor people who depend on them
END_OF_DOCUMENT_TOKEN_TO_BE_REPLACED

By Joshua Stevens, Kasha Patel
Satellite data show that air pollution levels have dropped significantly over northern India since the country enforced a nationwide lockdown to control the spread of coronavirus
END_OF_DOCUMENT_TOKEN_TO_BE_REPLACED

Mangroves can prevent billions of dollars in flooding damage

By Michael Beck, Pelayo Menéndez
Preserving and restoring mangrove forests can be an extremely economically effective strategy for protecting coasts from tropical storm damage across the world
END_OF_DOCUMENT_TOKEN_TO_BE_REPLACED

By Fred Pearce
New climate models show a warming earth will lead to a loss of clouds, allowing more solar energy to strike the planet, which could cause temperatures to soar far above previous estimates
END_OF_DOCUMENT_TOKEN_TO_BE_REPLACED

By Soumya Sarkar
Climate change, land degradation and deforestation are combining to jeopardise global food security unless radical changes are made, warn scientists from around the world
END_OF_DOCUMENT_TOKEN_TO_BE_REPLACED

By Hiren Kumar Bose
As climate change gathers pace, insects are proliferating across the world, which scientists say will threaten food production, particularly in bio-diverse countries like India
END_OF_DOCUMENT_TOKEN_TO_BE_REPLACED

By Joydeep Gupta
Putting together the many climate studies published in 2019, scientists tell the UN climate summit in Mardrid that the world is very close to tipping points
END_OF_DOCUMENT_TOKEN_TO_BE_REPLACED
Share This