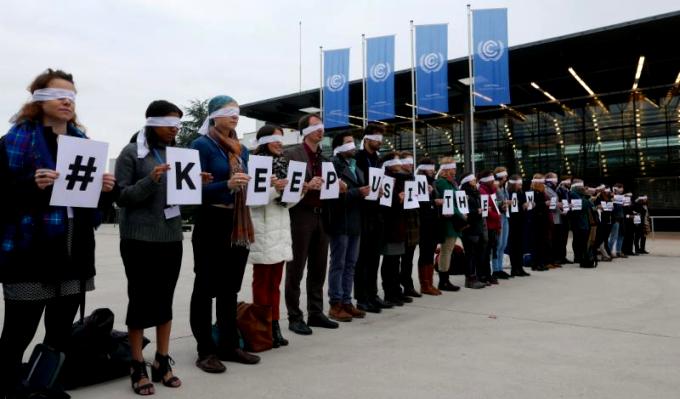 NGOs protest against being barred from last week’s UN climate talks. Inside the building, familar disagreements blocked progress just a month ahead of Paris summit (Image by Global Campaign to Demand Climate Justice)

Most of the major obstacles to a meaningful climate deal remained after last week’s UN-hosted talks, transferring much of the burden from bureaucrats to environment ministers just one month ahead of the start of the UN climate summit.

The failure of negotiators to make compromises on issues such as carbon finance, and responsibility for future emissions cuts, suggest that a deal to be reached in Paris could be highly modest in scope, disappointing those countries that are likely to suffer most from climate change.

Developing country negotiators last week pointed to recent, highly destructive storms in the Philippines and Mexico as the kind of extreme weather events that rich economies need to do more to prevent through deeper emissions cuts, and help poor nations deal with.

Compensating vulnerable countries for the impacts of climate change, the so-called ‘loss and damage clause’, remains a major demand from developing nation blocs.

But this is being strongly resisted by negotiators from richer economies, who want to avoid leaving their governments open to huge lawsuits related to their historic use of coal.

Developing countries spoke of a ‘trust deficit’, referring to the US$100 billion of climate finance a year from 2020 promised by rich countries. Only one-tenth of that  has been paid up so far – mainly through the Green Climate Fund  – and proposals related to concerns among developing countries on finance were removed from the agreement draft by the two co-chairs – Dan Riefsnyder of the US and Ahmad Djoghlaf of Algeria.

The draft was a running sore during the week-long talks. South Africa’s main negotiator at the meeting, Nozipho Joyce Mxakato- Diseko, who is also rotating chair of the G77+China group, referred to the co-chairs’ draft as a form of ‘apartheid’.

Delegates from rich nations, especially the US, said they could not commit to any significant change to the draft, so all contentious issues will have to be dealt with by environment ministers and heads of government gathering in Paris. The lack of progress and unwillingness of countries to compromise, symbolised by the insertion of hundreds of square brackets back into the negotiating text, was a disturbing echo of the failed 2009 UNFCCC summit in Copenhagen.

The co-chairs tried to get agreement in small clips, by splitting the agreement draft among seven ‘spin-off’ groups.

When that did not work, there was a desperate attempt on the penultimate evening to do a round of ‘stocktaking’ and produce a new draft. But this stocktaking group excluded the entire G77+China bloc, as well as Mexico, which had thrown in its lot with the other 134 governments.

Expectedly, that led to outrage in the open session in the final morning, with the delegate from Venezuela drawing parallels to the Copenhagen fiasco, where a similar attempt had been made.

In 2009, an attempt by a small group of countries to fashion a shorter draft prompted a huge amount of distrust in the Danish leadership of the talks and the intentions of developed countries. The South African delegate expressed her “profound dissatisfaction” at last week’s events.

Finally, the draft, which had swelled from 18 pages to 51 during the week, was sent up to ministers. Developing countries were so incensed they did not even want the co-chairs to identify areas of duplication and possible areas of agreement in the text. That exercise will now be undertaken by the UNFCCC secretariat.

While the UNFCCC was keen to point out that a draft agreement was a “balanced” text that constituted a starting point for the Paris summit, its chief Christiana Figueres said the text needs to be much shorter and organised to be basis of an agreement in just six weeks time.

She said: “The challenge for governments is to bring it down to a much more concise and coherent form for adoption in Paris.”

Laurence Tubiana, Climate Change Ambassador for the French government and president of the next summit, was visibly disappointed. At the closing, plenary called for a “spirit of compromise”.

Ill-feeling at the Bonn meeting also stemmed from a lack of participation allowed for non-governmental organisations and specialist observers at the conference, some of whom have attended these meetings for decades. According to some, NGOs were kept out at the insistence of the Japanese delegation.

But while expectations have waned that a meaningful agreement will be achieved in Paris, the feeling remains that a ‘better-than-nothing’ deal will be done, mainly based on national climate plans otherwise known as INDCs. Some think tanks say that if these plans were to implemented fully, an agreement could keep a rise in global temperatures to to 2.7 degrees Celsius by the end of this century, well above the 2C degree goal that governments had agreed at the 2010 climate summit.

Other estimates think current pledges will likely lead to 4C warming, a rise that would render larger swaths of the planet as inhabitable. While the Paris meeting has been termed as the ‘end of the beginning’ on global climate action, with much of the future detail agreed in the years after the conference, a great deal will be at stake.

By Soumya Sarkar
The planet is losing biodiversity at an unprecedented rate, posing grave danger to human health and prosperity, the UN Convention on Biological Diversity warned in its flagship report
END_OF_DOCUMENT_TOKEN_TO_BE_REPLACED

By Olive Heffernan
With a range of marine geoengineering field trials moving forward, attention is turning to how research and eventual deployment should be governed globally
END_OF_DOCUMENT_TOKEN_TO_BE_REPLACED

By India Climate Dialogue
Six experts outline what Britain needs to do as it hosts the UN climate summit in 2020, a crucial year
END_OF_DOCUMENT_TOKEN_TO_BE_REPLACED

By Joydeep Gupta
It’ll take a global system change if this wish of former UK energy minister Claire O’Neill, who will head the next United Nations climate summit in Glasgow, were to come true
END_OF_DOCUMENT_TOKEN_TO_BE_REPLACED
Share This