Global carbon emissions may stall in 2015 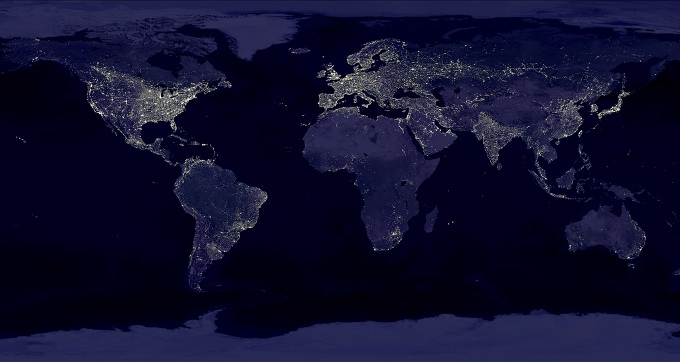 A composite of hundreds of images created using satellite data collected at night. CO2 emissions are likely to stall this year as demand for electric power in countries such as China slows and more low-carbon energy is added to grids. (Image by NASA)

Global carbon dioxide emissions from burning coal, oil and gas as well as from industrial activities grew by just 0.6% in 2014, according to researchers from the Global Carbon Project of the organisation Future Earth.

The researchers say emissions have grown even more slowly this year, and may even show a small decrease of 0.6% by the end of this year.

Carbon dioxide emissions account for the majority of greenhouse gas emissions that are warming the earth. Climate change is reducing farm output worldwide, intensifying storms, floods and droughts and raising the global sea level. For the billions of people who rely on monsoons, climate change is making rainy seasons shorter, but with more intense rainfall.

So a small increase in emissions or even a possible drop is positive news. But there is no cause for celebration, the researchers warned, as they released their report on the sidelines of the November 30-December 11 UN climate summit in Paris.

Concentrations of greenhouse gases (GHGs) passed the 400 parts per million stage in 2015, its highest in 800,000 years. This is close to a tipping point beyond which climate change could be catastrophic in many parts of the planet, the UN’s climate science panel has warned.

Only drastic cuts in global CO2 over the next few decades are likely to put the world on a path to cap an average rise in global temperatures to 2C, but the Paris summit is unlikely to agree cuts anywhere near what is required, while 1.5C threshold insisted upon by small island states would be increasingly out of reach in a modest agreement. 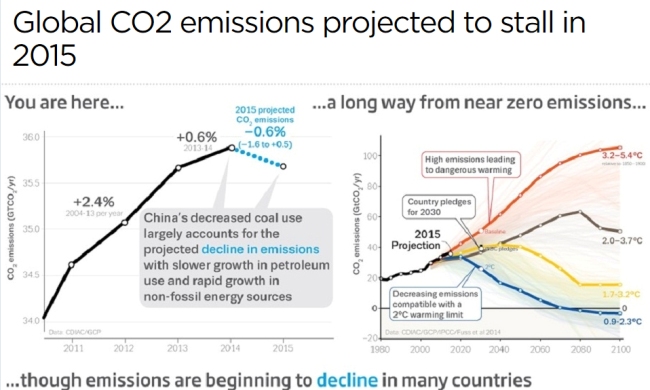 Study leader Corinne Le Quéré, Director of the UK’s Tyndall Centre at University of East Anglia, said at an event to publicise the release: “With two years of untypical emissions growth, it looks like the trajectory of global emissions might have changed temporarily. It is unlikely that emissions have peaked for good. This is because energy needs for growing economies still rely primarily on coal, and emissions decreases in some industrial countries are still modest at best.”

The projection for 2015 is based on available energy consumption data in China and the US, and on forecast economic growth for the rest of the world. Le Quéré said: “The projected decline is largely due to China’s decreased coal use, driven by its economic adjustment. Whether a slower growth in global emissions will be sustained depends on the use of coal in China and elsewhere, and where new energy will come from.” In 2014, more than half of new energy needs in China were met from renewable sources such as hydro, nuclear, wind, and solar power, she added.

Typically, carbon dioxide emissions have only declined during periods of economic crisis, such as that which occurred between 2007 and 2008. But this would be the first decline during a period of global economic growth.

Le Quéré pointed out that the average annual growth in emissions since 2000 has been 2-3%. “It is important to remember that our projection for 2015 is an estimate, and there will always be a range of uncertainty. In this case, the 2015 projection ranges from a global decline in emissions of up to 1.5% – or at the other end of the spectrum, a small rise of 0.5%.”

Robert Jackson of Stanford University, co-chair of the Global Carbon Project, pointed at slower global growth in petroleum use in 2014 and faster growth in renewables. Wind and solar capacities saw record increases in capacity last year and are on track to be even higher in 2015, he added.

No room for complacency

The news about the stall in global carbon emissions was welcomed by Prakash Javadekar, India’s Minister for Environment, Forests and Climate Change. He hoped that industrialised countries would soon reduce their emissions further so that developing countries had more space to grow their economies and provide electricity to those still without it.

Speaking as negotiators from 195 governments struggled to put together an accord to combat climate change – controlling emissions will be the major part of the accord – Le Quéré warned against the study leading to complacency.

“Global emissions need to decrease to near zero to achieve climate stabilisation,” he said. “We are still emitting massive amounts of carbon dioxide – around 36 billion tonnes from fossil fuels and industry alone every year. There is a long way to near zero emissions.”

“Today’s news is encouraging, but world leaders at COP21 (the climate summit) need to agree on the substantial emission reductions needed to keep warming below 2C.

Paul Shrivastava, Executive Director of the Future Earth project, said, “It is the first real indication that the global economy can begin the path towards decarbonisation. China must be applauded. Its efforts are both Herculean and unexpected.”

By Soumya Sarkar
The planet is losing biodiversity at an unprecedented rate, posing grave danger to human health and prosperity, the UN Convention on Biological Diversity warned in its flagship report
END_OF_DOCUMENT_TOKEN_TO_BE_REPLACED

By Soumya Sarkar
The chance of sudden, catastrophic river flooding in the western Himalayas has doubled as climate change leads to an increase in extreme rainfall events
END_OF_DOCUMENT_TOKEN_TO_BE_REPLACED

By Olive Heffernan
With a range of marine geoengineering field trials moving forward, attention is turning to how research and eventual deployment should be governed globally
END_OF_DOCUMENT_TOKEN_TO_BE_REPLACED

By Anjali Notandas
Concerned about the dangers of climate change and environmental degradation, children in India have taken to activism, demanding their rights to a better future
END_OF_DOCUMENT_TOKEN_TO_BE_REPLACED

By Shikha Bhasin
Proper servicing is key to efficient running of environment-friendly cooling systems, demand for which is expected to surge as temperatures rise across India
END_OF_DOCUMENT_TOKEN_TO_BE_REPLACED

By Kamal Prakash Seth
As the biggest consumer of palm oil, India can take a lead in demanding ethical palm oil production that can stop deforestation in southeast Asia and reduce air pollution
END_OF_DOCUMENT_TOKEN_TO_BE_REPLACED

By Sapna Gopal
The growth in the wind sector has been slowing for the past few years in India; this has now been compounded by disruptions due to the Covid-19 pandemic
END_OF_DOCUMENT_TOKEN_TO_BE_REPLACED

By Ebru Kirezci, Ian Young
Higher sea levels, extreme storm surges and higher tides would expose 287 million people to coastal flooding by 2100 and could affect an additional 48% of land area
END_OF_DOCUMENT_TOKEN_TO_BE_REPLACED
Share This