The Paris climate agreement is supposed to be “legally binding”, but what does that really mean? we asks the experts 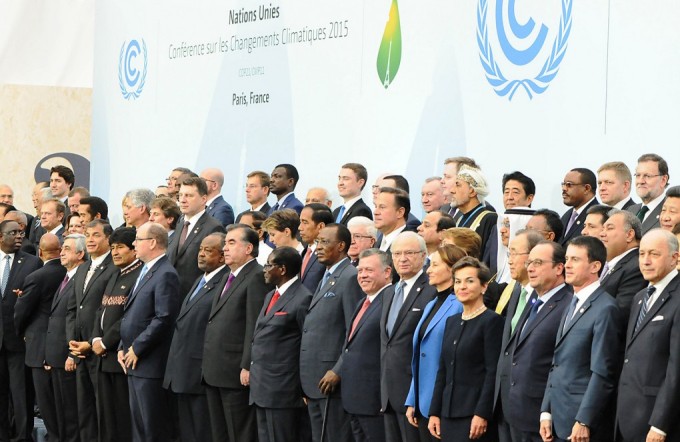 Heads of government at the start of the climate talks on Nov 30. The legal nature of the treaty is likely to be one of the dominant themes this week as environment ministers try and make progress on a draft text. (Image by Flickr de UNFCCC)

Legally binding agreements are necessary to compel big emitters such as the US to come on board and reduce their emissions to reach the 2C target. However, as witnessed in the past, the US refuses to enter into such agreements. In case of Paris – the US is reluctant to accept it as legally binding and translate it into their national level development plans and policies. Unless agreements are legally binding, developed countries such as the US do not feel the ‘moral obligation’ to voluntarily curb emissions or the pressure and urgency to move towards a greener development pathway. Being a citizen of Bangladesh – a developing nation that is severely affected by the impacts of climate change that threaten the very survival of its people.

The ‘legally binding’ debate has a number of components. First of all is the question of whether the (Paris) agreement itself will be legally binding. There I think all parts are moving forward in developing a binding international agreement. Second, is what commitments in that agreement are legally binding.

For example, should countries be bound to achieve the targets in the agreement like they were in Kyoto? Or is the binding component that countries shall report and maintain their commitments or implement policies to achieve those targets. This is where the US has been very clear that it does not support having legally binding targets in the agreement. The US is not alone in this position. There is a good opportunity in Paris to create an effective and binding agreement that reflects the collective will to act.

There is a gathering consensus among nations that the 2015 agreement can and must be a treaty. There is less agreement among nations, however, on the extent to which particular obligations within this treaty, such as those relating to the mitigation contributions countries have pledged, should lend themselves to enforcement. And, whether such contributions should be an integral part of the agreement or not.

That the 2015 agreement must be a legally binding treaty is beyond serious question. The urgency and seriousness of the climate challenge demands a legally binding response. Legally-binding instruments signal the ‘highest expression of political will’. They crystallise international commitments into domestic legislative action, co-opt domestic enforcement and generate predictability and certainty in implementation, as well as accountability at the domestic and international level. Commitments captured in legally binding instruments also typically survive domestic political changes as well.

However, commitments within legally binding instruments may or may not lend themselves to enforcement based on the nature of the commitment, the language it is couched in and the precision of its terms. For instance, the commitments in the 2015 climate agreement in relation to mitigation contributions could constitute procedural or substantive obligations, and/or obligations of effort or obligations of result.

The US, it appears, and developing countries like India and China may well agree to a treaty in Paris but it is unlikely they will agree that their national contributions  should lend themselves to enforcement.

Achala Abeysinghe, an expert in global climate law, policy and governance for the International Institute for Environment and Development in London. She also advises the chair of the Least Developed Countries group at UN climate talks

What is most important is when you look at the agreement (and) whether it is legally binding or not, is the obligations within it and the provisions to actually enforce those obligations. For the Paris agreement to be most effective, it will need to contain obligations for conduct as well as obligations for results.

Obligations for conduct means parties will have obligations to communicate a pledge on mitigation, on finance and even on adaptation, and maintain that pledge over time to realise their mission. Another key element will be rules around transparency of action, as well as rules around accountability.

Another key point is a section on compliance. What happens if countries don’t keep to their obligations? That means you have to have some kind of provisions to ensure enforcement, or ensure compliance under the agreement.

However some parties do not want the strictest enforcement mechanisms. They want to have non-punitive, non-judicial, non-intrusive, facilitative mechanisms to ensure compliance. So we don’t know (yet) how the agreement is going to look like in Paris.