French hosts conjure up compromises in draft agreement on climate change, but it’s not a done deal just yet 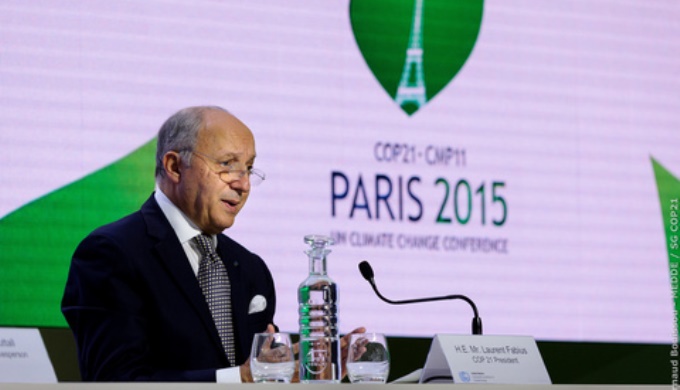 The legend amongst veterans of the world’s long running diplomatic efforts to contain dangerous climate change has it that the Japanese hosts of the Kyoto protocol became so frustrated at the overrun of the negotiations and the world’s failure to agree that they cut off the water, the heating and food. After 24 hours, they had a deal.

A sustained and skilled display of French diplomacy spared the delegates to COP21 in Paris the final indignity of no heating or water, but as the conference overran into Saturday, frantic negotiations were accompanied by the sounds of packers dismantling the national pavilions and NGO display stands that had hosted hundreds of lectures, roundtables and presentations on every aspect of climate change. By Friday evening, the high tech displays that are the feature of UN climate summits — a moving digital wall and a giant globe on which ever more alarming science data had been projected for two weeks, were dismantled and ready to move.

By Saturday morning, food stalls and coffee stands that had sustained the temporary community of COP21 were shuttered and deserted. The lost property office had sorted dozens of unclaimed lost scarves into colour gradations, and the cheerful young people who had handed delegates apples on arrival every morning had gone. Instead, from the president of historic COP21, French foreign minister Laurent Fabius, a postcard of an apple. It was time to go home, and to leave the thousands of helpers, workers, security guards, officials and diplomats who had helped to make it work to reflect on their efforts.

From the efficient and free transport, to the people at every stage who cheerfully directed the human traffic flows, the attention to organisational detail in Paris was impressive. Inside the complex and often fractious negotiations, the same attention to detail and organisational intelligence was brought to bear in the constant effort to stop trust breaking down. The UN and the French hosts gave reassurance and soothed ruffled feathers. They encouraged coalitions, and urged interest groups and confrontational parties not to lose sight of what mattered so that  compromises could be found and the train kept on the tracks.

For Fabius, it came to a head as midday on Saturday, when he took to the stage to announce to the assembled delegates that a final draft would be circulated to them shortly. Even then the story was not over: once the delegations read the text, each one must signal assent.

Fabius, who has emerged as the unchallenged hero and magician of the conference, spoke with deep emotion of those who had “struggled, but were not able to witness this moment.”  In a masterly speech, he stressed that the agreement did not give everyone everything they had wanted. But he added it was fair, robust and balanced, and that every delegation could go home “with heads held high.”

“If no country got all it wanted,” he said, “we have known from the beginning that if everyone insisted on 100% of what they want, collectively we would get 0% of what we need. “

In urging delegates to accept the deal, Fabius told them that the eyes of the world were upon them, a sentiment echoed by the Secretary General of the United Nations, Ban Ki-moon, who also called on delegates not to abandon the spirit of compromise: “We must not let the quest for perfection become the enemy of the public good,” he said. “I urge you to continue in the same spirit of compromise that has characterised the past two weeks.”

French President François Hollande reminded the delegates of the weight of history. “It is rare in life to have the opportunity to change the world. You have it. Grasp it,” he said.

By Jai Kumar Gaurav, Akshar Bhatt, Kundan Burnwal
A long-term low-carbon economic strategy can help a country to reduce policy uncertainty, which would help investment decisions by both the public and private sectors
END_OF_DOCUMENT_TOKEN_TO_BE_REPLACED

By Navroz K Dubash
While an Indian net-zero announcement may add to the international momentum, it also risks being a hollow pandering to global pressures at best
END_OF_DOCUMENT_TOKEN_TO_BE_REPLACED

By Soumya Sarkar
The United States under President Joe Biden has re-entered the Paris climate agreement, providing a renewed impetus to act on the world’s deepening climate crisis
END_OF_DOCUMENT_TOKEN_TO_BE_REPLACED

By Joydeep Gupta
India is meeting its current unambitious pledge, but it is still pushing coal and failing to protect natural resources needed to protect people from the worst impacts of climate change
END_OF_DOCUMENT_TOKEN_TO_BE_REPLACED

By Lou del Bello
Developed countries are taking action to reduce their own carbon emissions, but they are not coughing up enough money to help vulnerable poorer countries do the same
END_OF_DOCUMENT_TOKEN_TO_BE_REPLACED

By Joydeep Gupta
US president-elect Joe Biden has strong popular backing to deliver action on climate change, which could provide impetus for countries worldwide to follow suit
END_OF_DOCUMENT_TOKEN_TO_BE_REPLACED

By Soumya Sarkar
The planet is losing biodiversity at an unprecedented rate, posing grave danger to human health and prosperity, the UN Convention on Biological Diversity warned in its flagship report
END_OF_DOCUMENT_TOKEN_TO_BE_REPLACED
Share This