Odds in favour of odd-even in Delhi

India’s first, and biggest, experiment to decongest roads and reduce vehicular pollution has seen people in the national capital ditch their cars to make the odd-even traffic rule a success so far

New Delhi, India’s national capital, which hosts a population of over 16 million people, began its year with a radical plan to cut down traffic and air pollution. On odd numbered days private cars with odd numbered licence plates were allowed on the roads, and on even days, those with even numbered licence plates. Sundays were open for all. One week on the ambitious plan large sections of the national and international media, citizens and the state government claim that the plan is a success, with a 30% drop in vehicular pollution. However, experts suggest that while the roads have indeed been decongested it might be too early to predict pollution levels.

The 15-day test is a drastic measure to help free the choking city, now infamous for having the worst air quality in the world. During winter, the levels of dangerous PM2.5 particles often reach critical levels. The plan was received with scepticism, especially since previous such efforts in other cities or countries have not worked. Although such a policy cut air pollution by upto 40% in Beijing, it was a short-term measure just before the 2008 Olympics. Nevertheless, in Delhi, the residents have been remarkably cooperative.

In the first five days, Delhi Traffic Police fined 1,938 drivers for violating the rule and collected INR 3,900,000 (USD 58,000). Considering that Delhi has 2.8 million private cars and jeeps, with an 1,400 new cars added to its roads each day, this shows a very high level of compliance.

Many people stepped out of their comfort zone and ditched cars to opt for public transport. The Arvind Kejriwal-led Delhi government also made special arrangements to increase the frequency of metro trains and buses to encourage people to use public transport.  Several ministers were seen cycling, or using buses to go to work to raise awareness and set an example for the public. Even judges of the Supreme Court carpooled to work. With close to 40% vehicles off the roads, the city was mostly congestion free. On social media many citizens reported that they had significantly shorter commutes. 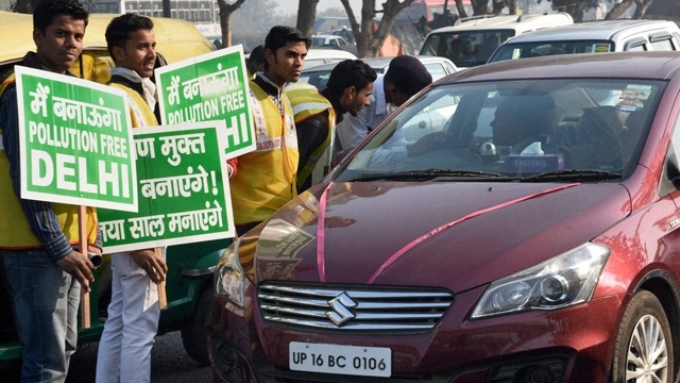 While the government has imposed a steep fine of INR 2,000 for violators, it may not be the sole factor for the fewer number of cars. The Delhi High Court referred to the city as a “gas chamber” and a study found that up to 43.5% of schoolchildren suffered breathing difficulties. Most people told India Climate Dialogue that they were supportive of the campaign and suggested that it be taken a step further. This could be a reflection of a positive shift in the mindsets of the people in a city where cars are aspirational commodities.

“I think it’s not just the government’s duty. It is the responsibility of all citizens living in this city to reduce pollution for themselves and for the sake of their families. We should use cars only in an emergency situation. Besides odd and even, we should do whatever we can to cut down pollution because every house has some family member suffering from lung or heart disease or even cancer,” said Raj Kumar Maheshwari, a resident of Model Town in north Delhi.

Basil Moses, who also resides in Model Town supports the idea as well but said a lot needs to be done. “Public transport is pathetic, especially buses. Last point connectivity is very poor. Hence, until we have an extensive, consistent and safe transport system in place, this experiment is ill conceived. But, in principle, I support the effort and am following it religiously. The volume of traffic has become more tolerable.”

According to Sunil Kumar Gupta, a resident of Shalimar Bagh in northwest Delhi, the policy enhances the efficiency of public transport system, especially buses, and should be replicated in other cities as well.

Gupta, who himself cycles to work, said, “On an average, three cars ferry five people. But just one bus carries 50 people at least. And with less traffic, buses will get more free space to run on schedule.

“Class biases are prevalent and many people don’t want to be seen travelling in a bus. Many feel that this is against their image. So, top corporate heads should be asked to travel in buses. This will help people get over these mental barriers.”

Some people pointed out that the experiment was a success because there is already less than usual traffic with the government extending the winter break for schools till January 15.

“Right now, 20-30% of traffic is off the road because schools are shut. So, though this is a good move, I am not sure how it would be implemented in the long run,” said Ashok Bhutani, committee member of the G.D. Goenka School and the Dayanand Public School in Model Town.

Ambar Vaid, who lives in the suburb of Faridabad, echoed the view. “It is an excellent move but will the government continue with it after that? I don’t think so.  Because of the politics involved, the government will worry that it will make a lot of people unhappy and affect its vote bank. But what I am sensing is that people are actually loving it.”

He also advocated that it be implemented in a uniform manner and include two-wheelers. Currently, the rule applies only to cars. Delhi has over 28 lakh scooters, motorcycles and mopeds – almost the same number as private cars.

A policeman holding a sign that reads, “We’ll make it a pollution free city, we’ll enjoy the new year” (Image by Delhi government)

Though air pollution depends on a number of factors like weather conditions and other sources of pollution, monitoring by the Delhi Pollution Control Committee has shown a continuing declining trend in vehicular pollution since odd-even experiment began.

Data from 17 locations collected between 1st to 5th January showed that average level of PM2.5 particles was 353 (ug/m3), less by a margin of 130 as compared to same days in previous years. Vehicular pollution is said to be the main cause for PM2.5 levels during this period. The analysis also said wind-blown dust and construction dust were the factors behind PM10 pollution at this point of time.

“Yesterday, the levels recorded at 18 locations in Delhi were below 300 ug/m3. This was between 400-465 ug/m3 in the month of December,” Delhi’s Transport Minister Gopal Rai said on January 7.

According to Anumita Roy Chowdhury, executive director, Research and Advocacy, at the Centre for Science and Environment, said that on the morning of January 1 there was a sharp drop in the particulate matter as compared to the previous morning of December 31. This was despite the fact that on December 31 the wind was blowing at twice the speed, and would have dispersed polluting particles faster. “Even though there were less cars on January 1, because people were not going to work, it proves the point once again that fewer vehicles on the road does lead to a decline in air pollution.”

Comparing Beijing’s proactive and robust emergency action plan for days it faces extreme air pollution, Chowdhury said, “It is a great opportunity and we should think of adding more measures. For instance, Beijing shuts down industries, barbeques during emergency. We should shut Badarpur power plant on bad air days. We need to develop a full-fledged emergency action plan.  But at least we have started.”

However, Arunabha Ghosh, CEO of the Council on Energy, Environment and Water(CEEW), an independent policy research institution based in Delhi, said they need more data and time to come to any conclusion on the effectiveness of the policy.  “Right now, the evidence of less traffic jams has been largely anecdotal. We want to approach it scientifically and so we are monitoring 5 locations in Delhi and in those locations there has not been much change in traffic movement as compared to last week of December. But that could be because there were fewer cars on roads due to holiday season. So we are in the process of getting data of the last 2-3 years and then we will analyse it along with air quality data for an accurate picture. We should be able to get an idea by the middle of next week. Right now it is too early for us to say anything,” Ghosh said.

CEEW is currently monitoring traffic movement at Mathura Road in East Delhi, Munirka in South Delhi, Connaught Place in central Delhi, Mall road in the north while Patel Nagar in the West Delhi.