Amaravati, the new Andhra Pradesh capital, is being planned as a climate-resilient city that will conserve its water, but its location is causing concern

The foundation stone of Amaravati (Image by S. Gopikrishna Warrier)

On October 22, 2015 India’s Prime Minister Narendra Modi laid the foundation stone of a new city in a banana grove 13 km southwest of Vijayawada and less than 2 km south of the Krishna river. The ceremony marked the beginning of a dream project for the Chief Minister of Andhra Pradesh, N. Chandrababu Naidu, to develop an international class city in India.

A substantial section of the old state of Andhra Pradesh in southern India was carved out into a new state, Telangana, on June 2, 2014. Telangana got Hyderabad — the erstwhile capital of united Andhra Pradesh — as its own capital. The new, smaller, Andhra Pradesh either had to choose another city for its own capital, or build a new one. It has chosen to build a city to be called Amaravati.

It is only the second time in independent India that a state capital is being built from scratch. The earlier one was Chandigarh, built in 1960, which is now the joint capital of Punjab and Haryana states. The Amaravati project will also tie in to the current Indian government’s efforts to promote “smart cities”.

Fulfilling both and emotional and practical need

There is an emotional need for an international class capital city and capital region among a section of the population in Andhra Pradesh. “Amaravati will be the realisation of dreams and aspirations of our people,” said V.V.M. Krishna, past-president of the Confederation of Indian Industry (CII) chapter in the state. “Historically, the people of Andhra Pradesh are pained at being shunted out of two state capitals — Chennai [then known as Madras] and now Hyderabad. We need our own international class capital city.”

To answer this need the Master Plan of the Andhra Pradesh Capital Regional Development Authority (APCRDA) states that Amaravati will be a “world class capital city that respects its roots and people, but at the same time lays the foundation for a state of art modern city.” It is also being planned as the focus of growth for the capital region, which comprises Vijayawada and Guntur and nine adjoining towns and has an area of 8,352.69 sq. km.

Amaravati is to be developed under an Urban Sustainability Framework, which will look at considerations of capacity, economics, housing, culture and heritage, energy and resources, and nature. The six key sustainability issues identified in the plan are: creating jobs, attracting investments, providing housing facilities, preserving nature and environment, managing floods and conserving the heritage sites.

In addition to the Krishna river abutting the new capital there are streams, hills and protected forests inside what will become the city area. The planners propose to preserve them.

Amaravati is expected to have an efficient and effective public transport system, use renewable energy, conserve water, promote green spaces and clean industries, and minimise its carbon footprint. To give economies of scale to institutions and businesses, the city has earmarked special areas such as government, justice, education and knowledge, finance, electronics, health, sports, media and tourism cities. The projection is that the city will be able to generate up to 1.5 million jobs for a population of 2.5 million by 2050.

“We are looking at sustainability as the city’s longevity,” Nagulapalli Srikant, the Commissioner of APCRDA, told India Climate Dialogue “It should live long, it should not affect the external environment and internally it should be clean. It should also be resilient to flood. As part of the Master Plan we have seen to it that it would not be a polluted or a bad city to live in. It would be a walkable city where people would like to come, work and settle down.”

To reduce pollution, the plan envisages high-rise buildings near metro and bus rapid transit system (BRTS) stations. This is to encourage higher population density along these corridors and encourage the use of public transport for commuting. “To a large extent we are providing BRTS and bus stations everywhere in Phase 1 and then the metro stations will come in place as and when the city can afford,” Srikant said.

Though the development of Amaravati and the capital region is a prestigious project for Chandrababu Naidu, it is facing a funds crunch. In the state’s budget presented for 2015-16, the government had a revenue deficit of INR 72.99 billion (USD 1.08 billion) and a fiscal deficit of INR 175.84 billion (USD 2.59 billion).

Maybe more problematic is the location of the city. The 217 sq. km. on which the capital is planned is prime agricultural land on the bank of the Krishna. According to M. Seshagiri Rao, president of the capital region farmers’ federation, 103 types of crops are grown on the same land right now. This includes cereals such as rice, maize, sorghum and millets; pulses such as Bengal gram, green gram and black gram; a variety of vegetables and fruits; and flowers. 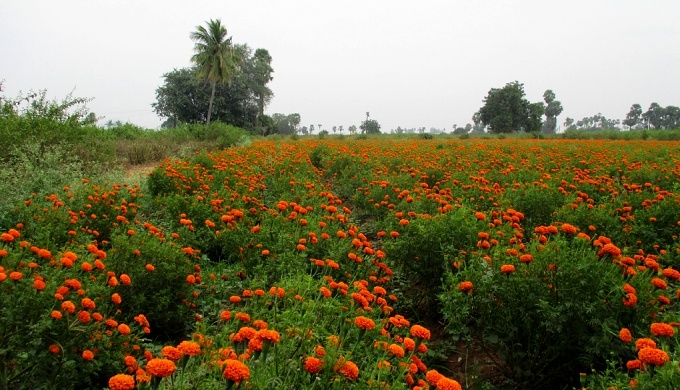 A marigold farm at the location of the proposed city (Image by S. Gopikrishna Warrier)

For instance, in village Nidamarru, which is at the furthest distance from the river, farmers get attractive income from growing flowers. J. Naga Reddy, who did not agree to sell his farm for the capital, grows three kinds of jasmine and gets a rent of up to Rs 100,000 for an acre per year. “I get produce all through the year and I am not interested in giving up my land,” he said. “What will I do in a city?”

Once the Andhra Pradesh government decided to establish the capital region it announced a land pooling scheme (LPS) where farmers could pool their agricultural land for the capital and get developed residential and commercial land in return in the new city (from 1,200 to 1,450 square yards per acre of agricultural land pooled). “The broad objective of the scheme is to do justice to the families affected by the construction of a liveable and sustainable capital city for the state of Andhra Pradesh by making the landowners and local residents as partners in development,” states the Notification.

According to the Master Plan, the framework set for land pooling articulates that the land returned to the farmer would be within the same village boundary from which the farm land was pooled, would be close to existing village settlements and would have good road connectivity.

“It is for the first time that land pooling is being done at such a large scale,” said Srikant. “The major challenge for us is to meet with the people’s expectation — especially those who have agreed on land pooling — very quickly. They want to see development or construction starting soon.”

V. Sambasiva Rao of Tulluru village echoes his views. “If the development of Amaravati does not happen then the economy of the region will collapse.”

Even if Amaravati develops as planned and the city becomes the focus of economic growth, Andhra Pradesh will lose the agricultural production from some of its most fertile lands. This, in turn, will reduce its climate resilience and increase its vulnerability to food shocks.

Warnings for the future?

Days before the laying of the foundation stone, the banana plants at the site were cut due to security reasons. This became a symbol of what may happen to the 217 sq. km. of fertile land.

A banana grove near the foundation stone (Image by S. Gopikrishna Warrier)

Eminent agricultural scientist M.S. Swaminathan tweeted his message of caution on October 23, 2015. “There’s an opportunity to design a new capital after several decades,” he said. “#Amaravati is in world’s best farming regions. Hope following principles will be used by the dynamic @ncbn [N. Chandrababu Naidu] while shaping Amaravati’s personality.” He followed up with subsequent tweets giving suggestions for making Amaravati sustainable.

Swaminathan’s tweets capture the essence of Amaravati’s dilemma. There is the promise of starting a new city from scratch, which means that there is opportunity to design it as an engine of economic growth while ensuring that it is more sustainable, climate resilient and incorporates the best of international practices. On the other hand, the new city eats into the agricultural economy, thus affecting the livelihood of the farmers in 31 villages.

By Joydeep Gupta
Despite the serial disasters of pandemic, cyclone and locust attack, India’s economic stimulus package continues with its inefficient short-term thinking, although there is no shortage of viable alternatives
END_OF_DOCUMENT_TOKEN_TO_BE_REPLACED

By Nambi Appadurai
We have to invest in resilience-building measures, especially in health infrastructure, and weather and disease forecast systems, addressing training and adaptive capacity needs
END_OF_DOCUMENT_TOKEN_TO_BE_REPLACED

By Mandakini D. Surie
The Covid-19 pandemic has shown that universal access to water is critical to public health, sustainable development and economic growth. Our politicians must act now
END_OF_DOCUMENT_TOKEN_TO_BE_REPLACED

By Jillian Du, Robin King, Radha Chanchani
There is an urgent need to address shortcomings of social distancing and hand washing in crowded cities with unequal facilities that will help build better resilience to future crises
END_OF_DOCUMENT_TOKEN_TO_BE_REPLACED

By Soumya Sarkar
Billions of people will suffer from water stress and deprivation that is aggravated by climate change, the United Nations said in a report on World Water Day
END_OF_DOCUMENT_TOKEN_TO_BE_REPLACED

By Joydeep Gupta, Sapna Gopal
But takes a regressive step in this year’s budget with a huge allocation for coal
END_OF_DOCUMENT_TOKEN_TO_BE_REPLACED