India’s newest state capital is being built on a plain which floods thrice in an average year; often, it also suffers from droughts and consequent water shortage 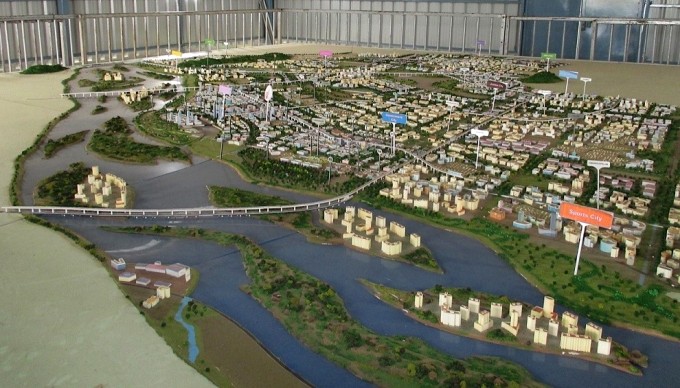 A scale model of Amaravati, on the banks of the Krishna river (Image by S. Gopikrishna Warrier)

The Indian government’s move to develop smart cities has got off the ground with the first list of 20 cities. The cities are supposed to be technology driven, sustainable and friendly to public transport. What is not being taken into account is the nature of the land on which these cities are sited.

Perhaps reflecting this, India’s newest state capital Amaravati is being planned on the banks of the river Krishna in the southern state of Andhra Pradesh, on land that floods thrice in an average year, and is dry and often drought-prone the rest of the time.

Amaravati is planned as a smart city from the very beginning, and its planners from the  Andhra Pradesh Capital Region Development Authority (APCRDA) are quite aware of the twin flood and drought threats. So controlling the flow of water in and out of the proposed 271 sq. km. urban area is top priority. “Different cities have different priorities, and for us the main interest is to protect the city from floods,” Nagulapalli Srikant, APCRDA Commissioner, told India Climate Dialogue.

“My definition of smart is from an infrastructure standpoint. It will help in controlling water supply or the sewage system. The smart system will help understand when water is flowing, if there is a leak or if a flood is building. A smart system can put in place a command and control system where the entire water flow situation can be monitored and controlled.”

Amaravati is located between the Krishna river and some low hills of the Deccan Plateau. If it rains in the hills, then depending on the flood modelling data that is already in the computer, a smart system should be able to model the amount of water that will reach the city, and then open the gates to a diversion canal, check the reservoir capacity and pump if necessary. Similarly, the smart system can manage the sewerage system, so that more pumps work when there is a lot of water flowing.

Water — too much, too little

None of this answers the question — why is Amaravati being built on such a vulnerable spot? The only defence of the policymakers is that it is the best spot available, even when they know their new capital may run short of water despite being on the banks of the Krishna.

There are three states upstream on the Krishna — Telangana, Karnataka and Maharashtra. All have plans to use more of its water for irrigation and hydroelectricity generation. The Andhra Pradesh government is thinking of a backup — to move water from the Godavari to supplement the water supply during the lean season. That is a scheme with serious drawbacks. A canal will have to be dug through more fertile land; the water will have to be pumped at a huge cost in terms of energy and carbon footprint.

And when it rains heavily and upper riparian states let the water out of their dams, the new city may be flooded. That happens now to the farms over which Amaravati is being planned. One of the flood management strategies listed in the Master Plan is to fix a minimum platform height of 25 metres above sea level for future developments in the city. “As a rule of thumb, the existing ground level should be topped up to a higher level than the maximum predicted flood level in each zone,” the plan states.

“The land in the capital city area is mostly open space or rural with agriculture land,” notes the Master Plan. “With the urbanisation of the catchment area, the surface runoff volume and speed are expected to increase tremendously. Flood risks will rise if there is lack of proper storm water management provided as part of the development.”

According to the document, Amaravati is located at a point where Kondaveeti Vagu, a small river, joins the Krishna. “Together with its own tributaries, Kondaveeti Vagu flows across the capital city and causes inundation over about 13,500 acres of land every year during the monsoon season. The inundation of the low-lying areas within the capital city development area will usually last for 5 to 7 days during each spell of heavy rain and this occurs two to three times annually.”

In addition to raising the city, other strategies include reinforcing and realigning the existing Krishna river bund; detain storm water in ponds within the capital and the catchment area; conserve raw water using reservoirs; provide a green belt along the water bodies; and discharge excess water into the Krishna.

In short, due to the siting of the city, there is need for expensive flood control measures to ensure that it does not go under water when it rains or when the states upstream let out water from the dams. It also means problems for the villages around, and for the farmers who have pooled their agricultural land and are in return expecting domestic and commercial plots in the new capital.

M. Seshagiri Rao, president of the capital region farmers’ federation, said that if the land in the capital is raised 25 metres above sea level, then all the surrounding villages will be flooded whenever it rains. The villages will also have to raise their land at enormous cost if they are to avoid being flooded.

“There was a flood in 2009 where the HFL was 24 metres above sea level,” Rao told India Climate Dialogue. According to irrigation department data, this is the maximum height recorded of floodwaters in the Krishna. If the HFL is 2.3 metres above the value being used in the Master Plan, then even the proposed platform would go under water, he argued.

A work in progress

The Master Plan states, “A detailed flood analysis of Kondaveeti Vagu, as proposed by the Government of Andhra Pradesh Water Resources Department, is in progress. This will be completed subsequent to the finalisation of this report.”

Commissioner Srikant confirmed that more flood modelling work was in progress.  “We have done the flood modelling studies for 100 year interval,” he said. “Now the government has told us to do modelling for 1,000 years through simulation. All these studies are underway and we will be completing them in another six months.”

Learning from the neighbours

While Amaravati is being planned, the central government has selected Chennai — capital city of the neighbouring state of Tamil Nadu — for development as a smart city. Amaravati and Chennai have similar water management issues. Chennai has insufficient water during the dry months and floods when it rains. In November-December 2015, Chennai faced major flooding with the Adayar river overflowing its banks after heavy rainfall.

Krishna is a much bigger river than the Adayar and can carry much more water. A flood on the Krishna can cause great damage to life and property. If Chennai and Amaravati can manage floods sustainably, they will not only be smart cities, but climate resilient cities too.