The World Trade Organisation says while considering bids from solar power generation firms to set up projects, India cannot insist that a portion of the photovoltaic cells and modules are manufactured within the country 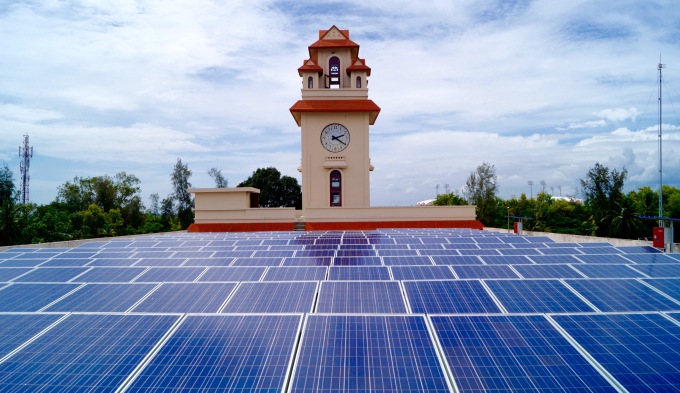 The 100 KW solar unit which has been fixed atop the golden jubilee building of Kerala University’s Karyavattom campus. (Image by ANERT)

The ruling by the World Trade Organisation (WTO) against the Indian government’s power purchase agreement with solar electricity generation firms has dismayed officials at the Ministry of New and Renewable Energy (MNRE).

Acting on a complaint by the US government, the WTO ruled in Geneva on February 24 that India’s domestic content requirement (DCR) from solar generation firms was “inconsistent with international norms”.  The US had alleged that this discriminated against American firms and “nullified” their benefits.

India’s National Solar Mission has a DCR embedded in all its tender documents, and no firm can bid to generate solar power without committing to manufacture a percentage of its solar photovoltaic cells and solar modules in India. The mission aims to generate 100 GW of solar power by 2022, the world’s most ambitious solar electricity generation goal.

The US went to the WTO in 2014 to protest the DCR, and the organisation had ruled in favour of the US earlier, leading to an appeal by India. Now the appeal has been turned down, leading one MNRE official to say this may make India’s solar plan more expensive, and would definitely hit domestic manufacturing and consequently the possibility of creating jobs in the sunrise sector.

Agreeing with its earlier ruling, the WTO’s dispute settlement panel has said, “The DCR measures are inconsistent” with relevant provisions of the Trade Related Investment Measures Agreement and with the articles of the General Agreement of Trade and Tariffs (GATT).

India had said the DCR was justified under the general exceptions in GATT rules, but the panel did not agree.

India does have the option of appealing again. The Indian government has also been trying to negotiate a settlement with the US, but that has not worked so far. India offered to make the DCR mandatory only for solar farms put up by public sector companies, but the US did not agree.

The latest ruling asks India to “bring its measures into conformity with its obligations under the TRIMs Agreement and the GATT 1994.” It says, “In cases where there is an infringement of the obligations assumed under a covered agreement, the action is considered prima facie to constitute a case of nullification or impairment.”

While Indian officials were discussing if they would appeal once more, the US Trade Representative’s office issued a statement, calling the ruling “a significant win that would hasten the march of solar energy across the world and support clean energy jobs in the United States.” A few days before the ruling, US Trade Representative Michael Froman had said the two countries were discussing the issue.

American solar cell manufacturers were more cautious in welcoming the WTO ruling. Dan Whitten, of the Solar Energy Industries Association said, “While we support today’s decision, we continue to believe that a mutually satisfactory resolution of this dispute, consistent with WTO rules, is the preferred solution.”

The ruling was roundly condemned by Friends of the Earth. Sam Cossar-Gilbert of the NGO said, “The WTO ruling against India’s National Solar Mission shows how arcane trade rules can be used to undermine governments that support clean energy and local jobs. The ink is barely dry on the UN Paris Climate agreement, but clearly trade still trumps real action on climate change.”

By Moonis Ijlal, Shreeshan V.
New rules announced by the power ministry on selling surplus electricity from rooftop solar installations could hold back expansion of the sector that has seen slow growth
END_OF_DOCUMENT_TOKEN_TO_BE_REPLACED

By Joydeep Gupta
Climate change made the Uttarakhand flash flood in the Indian Himalayas possible, and poor development policies on building dams and roads made it disastrous
END_OF_DOCUMENT_TOKEN_TO_BE_REPLACED

By Soumya Sarkar
The United Nations has warned that immediate action is needed to face the triple environmental emergency of climate change, biodiversity loss and pollution
END_OF_DOCUMENT_TOKEN_TO_BE_REPLACED

By Jai Kumar Gaurav, Akshar Bhatt, Kundan Burnwal
A long-term low-carbon economic strategy can help a country to reduce policy uncertainty, which would help investment decisions by both the public and private sectors
END_OF_DOCUMENT_TOKEN_TO_BE_REPLACED

By Navroz K Dubash
While an Indian net-zero announcement may add to the international momentum, it also risks being a hollow pandering to global pressures at best
END_OF_DOCUMENT_TOKEN_TO_BE_REPLACED

By Omair Ahmad
Norwegian ambassador Hans Jacob Frydenlund speaks in an interview about deepening science cooperation, the impact of the pandemic and India’s Arctic policy
END_OF_DOCUMENT_TOKEN_TO_BE_REPLACED

By Joydeep Gupta, Soumya Sarkar
Finance minister Nirmala Sitharaman has cut federal allocations to tackle urban air pollution by half, even as India’s cities remain among the most polluted globally
END_OF_DOCUMENT_TOKEN_TO_BE_REPLACED
Share This