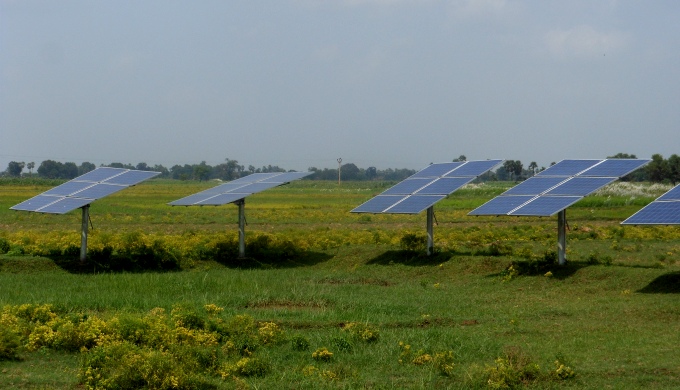 Arun Jaitley, India’s Finance Minister, officially announced India’s target of generating 175 gigawatts (GW) from renewable energy (RE) in his 2015 Budget speech. A year later, bureaucrats and industrialists are hoping he will give them enough money to achieve the world’s most ambitious RE target.

The Ministry of New and Renewable Energy (MNRE) has asked for over Rs 10,000 crore ($1.46 billion) in this year’s Budget, which will be presented to parliament on February 29. A MNRE official said, “We have sought this increased budget allocation because of the various schemes which have taken off.” The ministry got Rs 5,500 crore ($0.8 billion) last year.

The schemes that have started since April 2015 include green energy corridors, a nationwide transmission grid dedicated for power generated from RE projects; the ultra-mega solar power projects scheme, wherein 20 GW solar power capacity will be added across several states; and the viability gap funding scheme to provide capital cost support to project developers.

“Two aspects that need special focus to ensure macroeconomic stability and protection from rupee depreciation are higher consumer demand which can be spurred through growth oriented mechanisms such as reduced tax value and consequent purchasing power increase; and higher exports facilitated by providing economic stimuli and incentives,” Tanti said.

He felt India’s RE target provided “a $200 billion opportunity and can be very beneficial to national economic development… Continuing with the current fiscal benefits will bring certainty in investment and is imperative to maintain the momentum that the sector has obtained in the last year.”

Specifically, he wanted accelerated depreciation (AD) and tax benefits given to infrastructure projects to continue at least for the next five years; continuation of General Based Incentives (GBI) for at least five years and a long-term road map for this; zero goods and services tax (GST).

D.V. Giri, Secretary General of the Indian Wind Turbine Manufacturers’ Association (IWTMA) wanted the tax benefits to continue till 2022. He also wanted a ten-year road map on AD. “This will encourage confidence of investors.”

Small and medium enterprises using RE should get a 5% interest rebate, Tanti said. There should also be a 5% or so interest rebate for RE projects in which at least 70% of the equipment came from domestic suppliers.

Experts wondered if the Finance Minister would provide any incentive to domestic manufacture after the WTO came down heavily on India for having done that in the solar mission.

The Suzlon head said companies — especially those holding certain credit ratings — should be allowed to issue tax-free bonds. He wanted a policy for sharing hedging risk for borrowings in the sector, thereby reducing cost of energy, and making RE more competitive and acceptable to utilities and addressing the foreign exchange risk involved in obtaining international funding.

The sector wants support to manufacturers so that they can obtain financing more easily. Specifically, Tanti sought continuation of duty and excise exemption on certain imported components.

India’s 175 GW RE target consists of 100 GW from solar, 60 from wind and the rest from biomass. Tanti said the wind and solar sectors should be provided with the same incentives; there should be financial incentives to encourage domestic manufacture of solar photovoltaic (PV) cells; and Indian RE equipment exporters should get a higher credit line.

Sunil Jain, CEO of Hero Future Energies, told indiaclimatedialogue.net that one of the most immediate requirements of the solar and wind industry was more capital. “In order to raise capital at a reasonable cost, there have been instruments like green/climate bonds, private equity and investment trusts. While green bonds have started making some impact, in order to make them attractive, the government can give them tax concessions. The investment trusts never took off as the taxation structure for the same is not conducive for listing them on the stock exchange. You have to provide for similar treatment on capital gains as for stock exchange listing. Therefore, steps need to be taken to plug this leakage.”

Jain said currently the priority sector tag can give financing to solar projects only up to Rs 15 crore ($2.18 million) and this had to be increased. “Let the banks decide the limit on priority sector lending.”

Giri of IWTMA wanted wind projects to be included in the priority lending category. “Hurdles in financial closure for wind projects are resulting in their delay,” he pointed out. “A lower interest rate and longer tenure of lending for the wind energy sector also needs to be considered.”

Jain was worried that introduction of GST — as the government hopes to do — would make RE equipment more expensive. He echoed Tanti’s plea for zero GST on RE equipment. He also supported the Suzlon head on the AD and GBI issues. Overall, Jain felt, “The exemptions should be phased out in line with the reductions in corporate tax.”

Giri wanted the zero GST idea to be expanded. “We strongly feel that services related to construction, erection, installation, commissioning, operation and maintenance activities of wind operated electricity generators should also be exempt from service tax.”

He also felt the sale and purchase of private land for RE projects should be exempted from payment of stamp duty and registration charges.

Pranav Mehta, Chairman of the National Solar Energy Federation of India (NSEFI) and Co-Chair of the Global Solar Council, told indiaclimatedialogue.net that the government should also continue to promote decentralised solar applications and large deployment of micro and mini grids.

“Overall, the budget for RE should be doubled,” Mehta said. “Also, research and development and demonstration plants for newly established technologies should be encouraged.”

Experts say the potential of concentrated solar thermal (CST) in the form of heat generation far exceeds any other potential, including electricity generation. Siddharth Malik, Managing Director of Megawatt Solution, said government support to a mechanism that allows adoption of CST systems for industrial heating “is the need of the hour”. Specifically, he wanted a risk mitigation fund for those willing to try the technology.

CST electricity generation plants should get preferential treatment over plants using PV cells, Malik felt, because the technology allows power storage, which can then be fed into the grid to meet demand during peak hours. “This trend is widely followed in all developed energy markets and hopefully the government of India will also support this industry.”

In all the talk about solar and a bit about wind energy, the biofuels industry seems to have been eclipsed in India. Perhaps this is also due to fears that growing biofuels will take farms away from much-needed food crops.

Latha Chandradeep of Vayugrid — a company that makes biofuel — told indiaclimatedialogue.net that the central government should “have a clear policy that mandates states to develop supply sources for producing biofuel on non-arable land, that is fallow, unproductive land. Based on this, state governments should allocate wastelands which have a history of not being able to grow food to be earmarked for such projects.”

Chandradeep wanted such plots to be called “Bioenergy zones, like Special Economic Zones”, and sought the same kinds of fiscal incentives. She felt this would create “opportunities for locals to participate” in biofuel production.

Chandradeep was clear that the current policies of promoting use of sugarcane, soya or palm to produce biofuel “should be discouraged as they are food crops and consume immense volumes of water, which does not make it sustainable in any form. In addition, these are carbon intensive, right from use of water, to use of fertilisers.” She wanted incentives to grow biofuels on plots where food crops could not be grown.

By Joydeep Gupta
Despite the serial disasters of pandemic, cyclone and locust attack, India’s economic stimulus package continues with its inefficient short-term thinking, although there is no shortage of viable alternatives
END_OF_DOCUMENT_TOKEN_TO_BE_REPLACED

By Nambi Appadurai
We have to invest in resilience-building measures, especially in health infrastructure, and weather and disease forecast systems, addressing training and adaptive capacity needs
END_OF_DOCUMENT_TOKEN_TO_BE_REPLACED

By Soumya Sarkar
The drop in global carbon dioxide emissions driven by the coronavirus pandemic could be lost once the crisis blows over, unless we shift to cleaner energy
END_OF_DOCUMENT_TOKEN_TO_BE_REPLACED

By Mandakini D. Surie
The Covid-19 pandemic has shown that universal access to water is critical to public health, sustainable development and economic growth. Our politicians must act now
END_OF_DOCUMENT_TOKEN_TO_BE_REPLACED

By Jillian Du, Robin King, Radha Chanchani
There is an urgent need to address shortcomings of social distancing and hand washing in crowded cities with unequal facilities that will help build better resilience to future crises
END_OF_DOCUMENT_TOKEN_TO_BE_REPLACED

By Parvathi Preethan, Shubham Gupta
Zero budget natural farming is gaining traction in Andhra Pradesh, but much larger financing is required for this climate-resilient practice to bring about significant change
END_OF_DOCUMENT_TOKEN_TO_BE_REPLACED
Share This