‘India can generate 60 GW of wind power on target’

India’s wind power sector will ride the tailwind of policy initiatives and fiscal incentives to reach the country’s aggressive target of adding 60 GW of capacity by 2030, says Tulsi Tanti, chairman and managing director of Suzlon Energy

The government’s new policy formulations on establishing offshore wind farms and financial stimulus in the form of Accelerated Depreciation (AD) will provide a much-needed boost to the wind power sector, according to Tulsi Tanti, who leads India’s biggest maker of wind turbines. Tanti said other measures such as Generation Based Incentive (GBI) would help the country consolidate its fourth position in the league table of nations in installed wind-energy capacity. India overtook Spain after adding 2,623 MW of new installations to reach 22,088 MW in 2015, according to the Global Wind Energy Council. Edited excerpts from an interview:

India has committed to generating 60 GW (60,000 MW) of wind power by 2030, while the Prime Minister has given a much tighter deadline of 2022. Where are we in relation to this goal in terms of actual generation, installed capacity and capacity being installed? What are the chances that this goal will be reached?

The wind industry’s outlook is very encouraging. In the first nine months of the current financial year (which ends on March 31), installations were 1,644.58MW. As on December 2015, wind power installations in India crossed the 25GW mark.

The renewable energy (RE) sector is now under priority lending by Reserve Bank of India. The Supreme Court has ruled positively on renewable purchase obligation (RPO), which mandates that power companies and other entities have to buy a certain percentage of electricity generated from renewable sources or generate the required amount. Additionally, the recently launched UDAY scheme (Ujwal Discom Assurance Yojana) will ensure the financial turnaround and revival of the electricity distribution companies of India (Discoms). Also, the approval of the national offshore policy has opened up 7,600km of coastline and has created massive opportunity for the development of offshore wind energy generation. All these factors tell us that the government’s target is achievable.

The Indian government’s thrust on RE will help us make the target a reality. We need an annual installed capacity (addition) of 5,000MW to meet the government’s goal of 60GW. We should be able to reach this in two to three years from now. After that, all growth in annual installations will be over and above the required.

Suzlon is geared to meet this target. We are aligning our growth plans with the government’s target of 175GW of renewable energy by 2022 and wish to deliver an additional 15,000 GW by 2020. We have made a commitment of 16,000MW at RE-Invest 2015 (an investors’ meet organised by the Ministry of New and Renewable Energy) and are focusing on newer technologies that make previously unviable sites viable, and reduce the cost of energy. 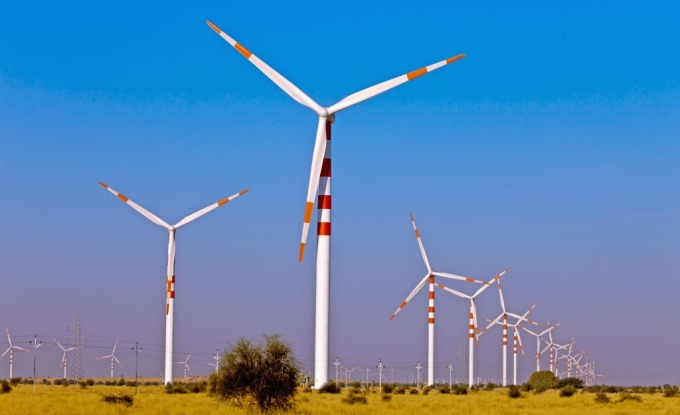 A wind farm at Jaisalmer (Image by Suzlon)

Credit ratings agency ICRA Ltd expects wind energy capacity addition during the current fiscal year to grow by 20% over last year to about 2,800 MW. What is your view?

The positive government policies, the growing demand for, and attractiveness of wind energy and the growing awareness of climate-change risks have already led to a large number of independent power producers (IPP) and non-IPPs entering the segment. I only see this trend growing. This is mainly due to strong policy support in place at the Centre, positive regulatory framework in the form of RPO regulations as well as the cost-competitiveness of wind-based energy vis-à-vis conventional energy sources.

How have reinstating GBI and AD helped the wind industry?

There has been a lot of growth in the wind industry because of the reinstatement of GBI and AD. At the end of 2014, the total wind energy installed capacity was 21,000MW. Out this, 16,000MW was a result of AD reinstatement. The main reason for this was that, post the reinstatement, investments from corporates, public sector units and small and medium-sized enterprises (SME) increased, taking the annual capacity of 2014-15 to 2,300MW. What the reinstatement has essentially done is help the SME sector invest and draw electricity for their captive utilization. This hedges their energy costs on a long-term basis, making them more competitive at the global level. This will lead to increased exports and manufacturing. In essence, AD and GBI have the potential to open up more than 20,000 jobs. They have made the wind energy market very attractive for domestic investments and foreign direct investment (FDI).

Wind energy companies like Suzlon and Mytrah Energy Ltd have forayed into the solar energy sector. What prompted this move?

Our energy demand is huge. This need cannot be met by one source of renewable energy. In fact, with the growing energy needs and climate change focus, all sources of clean energy need to coexist. This has led to increasing focus on solar energy over the last few years.

I believe that wind and solar are complementary and that they can actually enhance one another. That is why, as we focus on solar, we are also working on wind-solar hybrid solutions. We will apply our project execution capabilities to provide end-to-end solutions in solar, supported by skilled workforce and a diligent operations, management and services team.

Do you feel the government has given more emphasis to solar power than wind? If so, what are the ways in which this is affecting wind energy equipment manufacturers and energy producers?

I don’t believe that the growing focus on solar will affect wind energy. In fact, wind and solar together will boost manufacturing of the RE sector as a whole.

What is the status of offshore wind in India given the fact that a formal approval was granted in September for the development of wind power projects off the country’s 7,600 km long coastline?

Offshore solutions should become a viable reality in the near future, especially after the approval of the national offshore policy. The National Clean Environment Fund and the tapping of offshore funds by Indian Renewable Energy Development Agency will boost investment and growth of the sector. The target is to put up at least 10GW of offshore projects by 2022.

The National Institute of Wind Energy has recently launched wind and solar online maps. How will this help the industry?

Since the RE sector is highly dependent on technological advancements, the online maps will certainly help developers identify potential areas of development of new projects. Moreover, it will also help the central and state stakeholders to develop infrastructure like transmission systems that are required for the installation of renewable power projects in the identified areas.

A subsidiary of Singapore-based Sembcorp Industries Ltd signed a pact to develop a nearly 1GW wind power complex in Madhya Pradesh. Does the advent of foreign firms mean a further expansion of the sector?

We have a large target (175GW) to achieve by 2022. Wind energy sector is also attracting international investments, which is good for the industry. The country benefits in innumerable ways — electricity needs are met, jobs are created, technology innovation takes place and economic development is facilitated. This will cause a further expansion of the sector, one that will benefit the international investors, as well as India.

By Soumya Sarkar
The chance of sudden, catastrophic river flooding in the western Himalayas has doubled as climate change leads to an increase in extreme rainfall events
END_OF_DOCUMENT_TOKEN_TO_BE_REPLACED

By Anjali Notandas
Concerned about the dangers of climate change and environmental degradation, children in India have taken to activism, demanding their rights to a better future
END_OF_DOCUMENT_TOKEN_TO_BE_REPLACED

By Shikha Bhasin
Proper servicing is key to efficient running of environment-friendly cooling systems, demand for which is expected to surge as temperatures rise across India
END_OF_DOCUMENT_TOKEN_TO_BE_REPLACED

By Kamal Prakash Seth
As the biggest consumer of palm oil, India can take a lead in demanding ethical palm oil production that can stop deforestation in southeast Asia and reduce air pollution
END_OF_DOCUMENT_TOKEN_TO_BE_REPLACED

By Sapna Gopal
The growth in the wind sector has been slowing for the past few years in India; this has now been compounded by disruptions due to the Covid-19 pandemic
END_OF_DOCUMENT_TOKEN_TO_BE_REPLACED

By Joydeep Gupta
Protecting just 30% of earth's land and sea could result in financial benefits of nearly USD 235 billion every year by 2050, even without accounting for ecosystem services
END_OF_DOCUMENT_TOKEN_TO_BE_REPLACED