China’s 13th Five-Year Plan is the first to include PM2.5 targets

China’s draft economic plan for the next five years contains new targets that will need to be met if the country is to solve its environmental crises, reports Liu Qin 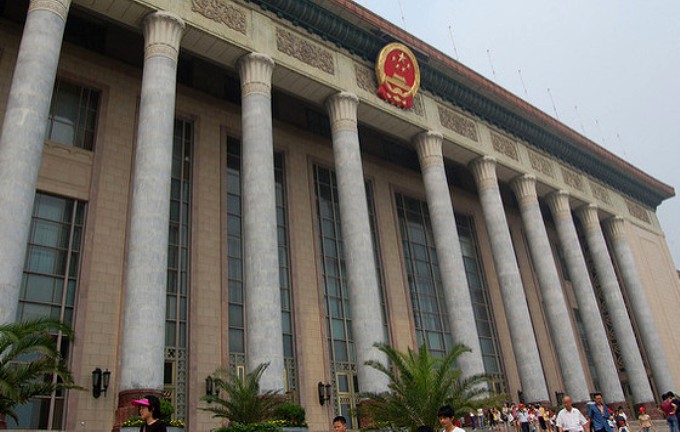 Beijing’s Great Hall of the People, which will host China’s annual legislative ‘twin sessions’ until late next week (Image by 中国政府网)

In his address to China’s National People’s Congress on March 5, Premier Li Keqiang called for “heavy blows” to be struck against air and water pollution that have exacted a heavy toll on large swaths of the world’s most populous country.

Li cited targets to improve environmental standards across the board, but focused in particular on measures to tackle urban smog that would deliver “good air quality” day readings for 80% of the year.

The targets are part of the forthcoming 13th Five-Year Plan (FYP), a policy blueprint that will shape China’s economic development over the next five years up to 2021.

The premier’s speech was delivered on the opening day of the session and set the tone for discussions that will continue until March 16.

The full list of proposals will not be published until the close of the twin legislative sessions. However, Li’s speech has already indicated that the government will limit factory emissions of tiny harmful particulate matter (PM2.5) – a major cause of air pollution – down by 25%.

This is the first time in the China’s history that a specific PM2.5 target has been included in a FYP.

The other main targets revealed in the government’s work report include: to reduce of emissions from coal burning industries and vehicles; to bolster cleaner and more efficient use of coal; to promote the use of electricity and natural gas in place of coal; support for wind, solar and bio power sectors; an increase in the proportion of clean energy; encourage the use of waste straw as a resource; a reduction in-field burning; and implementation of control measures to deal with air pollution.

Professor Hu Angang of Tsinghua University’s School of Public Policy and Management said that the 13th Five-Year Plan will provide a guide for how ‘green development’ will be implemented, and how it will align with economic growth.

“Achieving green growth means reducing energy and resource intensity and decoupling the emissions of key pollutants from economic growth and urbanisation,” he said.

Li spoke of recent efforts to restructure China’s economy. Since the implementation of the Five-Year Plan, the service industry has grown considerably,  energy intensity per unit of GDP has fallen by 18.2%; and emissions of key pollutants have dropped by over 12%.

The premier also said that China is addressing over-production in its energy intensive industries, such as construction and manufacturing, through corporate restructuring (the details of which remain undisclosed).

In China, local governments have traditionally had three functions: to manage public services; social welfare; and market regulations. A fourth important function is being added to that list, that of environmental protection.

Hu Angang told our sister website chinadialogue that the 13th FYP is proving the local governments with the tools and targets to switch orientation.

Manish Bapna, executive vice president of the World Resources Institute, hopes to see the 13th FYP include ambitious targets for action on the use of clean energy, the tackling of air pollution, forest-creation and dealing with soil and water pollution – and more importantly, a real shift in how the Chinese economy grows.

Something in the air

Smog appeared to be the focus of discussion both inside and outside of Beijing’s assembly halls. On the first day of the Lianghui Assembly, the city issued an amber pollution alert, meaning that schools and kindergartens were advised to keep children inside.

Song Zuying, a member of the CPPCC and famous singer, joked that while members from Beijing might be used to the foul air, those from other parts of the country would have to acclimatise.

While official figures showed air quality in China had improved in 2015, many people did not feel this was the case, One journalist pointed out at a CPPCC press conference. Wang Guoqing, a CPPCC spokesperson, responded that ending smog will require a sustained effort.

“Pollution does not form overnight, nor can our efforts to end it see immediate effect,” said Wang.

According to media reports, air pollution was one of the main topics at local-level Lianghui meetings, with local government work reports citing specific smog targets for the first time.

In Beijing, the city government intends to reduce PM2.5 levels by 5% in 2016. In northeastern Jilin, officials will launch a clean air action plan.

At the national policy level, CPPCC member Xu Jiankang proposed a smog tax and a congestion charge in order to reduce vehicle emissions. People’s Representative Li Sheng said that residential and other buildings should be required to include internal green belts to help clean the air and reduce smog.

Meanwhile, Yi Jianqiang, a Chinese Academy of Sciences expert added that the precise causes of smog are still unclear and need to be further investigated.

The view that smog is caused by vehicle exhaust fumes is more popular with the public than with scientists, he said.

By Nambi Appadurai
We have to invest in resilience-building measures, especially in health infrastructure, and weather and disease forecast systems, addressing training and adaptive capacity needs
END_OF_DOCUMENT_TOKEN_TO_BE_REPLACED

By Joydeep Gupta
India is meeting its current unambitious pledge, but it is still pushing coal and failing to protect natural resources needed to protect people from the worst impacts of climate change
END_OF_DOCUMENT_TOKEN_TO_BE_REPLACED

By Lou del Bello
Developed countries are taking action to reduce their own carbon emissions, but they are not coughing up enough money to help vulnerable poorer countries do the same
END_OF_DOCUMENT_TOKEN_TO_BE_REPLACED

By Joydeep Gupta
US president-elect Joe Biden has strong popular backing to deliver action on climate change, which could provide impetus for countries worldwide to follow suit
END_OF_DOCUMENT_TOKEN_TO_BE_REPLACED

By Chetan Pandit, Asit K Biswas
India's civil society now has an opportunity to chart a new course of action that ensures water security through a balance between hydrological needs and environmental safeguards
END_OF_DOCUMENT_TOKEN_TO_BE_REPLACED

By Bhasker Tripathi
Implementation of the clean air plans for India's cities can work if there are legal mandates, clear targets and accountability, coordination and sufficient funding
END_OF_DOCUMENT_TOKEN_TO_BE_REPLACED
Share This