There seems to be no relief in sight for Latur, which is reeling under a severe water shortage, with long queues and high prices making life miserable for citizens 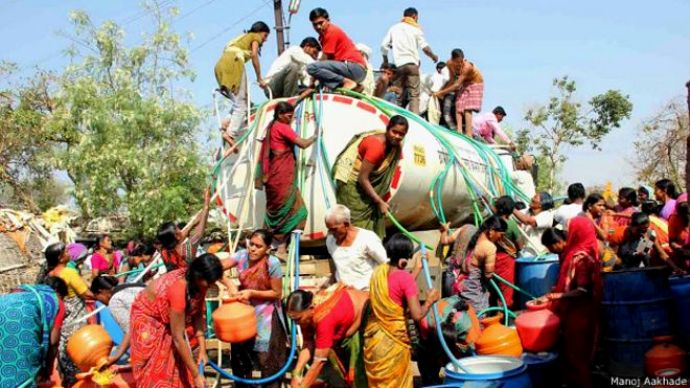 See the first report in the series: Deaths multiply in parched Marathwada

There’s no sleep for Usha Mankoskar even at 1.20am at night. Employed as a domestic help in Latur, a provincial town in Marathwada, Mankoskar is patiently waiting her turn in a queue to fill her ghagar, a 5-litre jar. She’s likely to spend another two hours there to fill a few more. Mankoskar will then load all of them on her bicycle and walk it to her destination 3km away. If she doesn’t get enough, she will be back in the afternoon at 3pm in the scorching heat that is already seeing temperatures upwards of 40 degrees Celsius.

The crippling water shortage in this city of about half a million in the drought-stricken region of Maharashtra is emblematic of the deep crisis people are facing across the country. India in 2015 suffered her worst monsoon in six years, leading to widespread drought for the second consecutive years. Such extreme weather events have been blamed partly on climate change, a threat multiplier.

The situation in Latur couldn’t be worse. All its 13 water reservoirs are empty. The severe shortage forced the authorities to declare section 144 of the Indian Penal Code, which is used to control riots and unlawful assembly, around the water bodies. A desperate district administration has arranged for 10 million litres of water to be distributed in 166 tankers. Railways minister Suresh Prabhu, a parliamentarian from Maharashtra, has asked for a special water train to be hauled from Pandharpur, 200km away.

Prices have soared as a result. Residents in Latur, or at least the better off, are buying 500 litres of water for INR 100 (USD 1.5). The rate was INR 10 just about 50 days ago. For the poor, there’s no option but to wait in queues and squabble over water from the public tankers, which are woefully inadequate to meet basic demands.

The authorities seem unprepared for the crisis that has been unfolding since at least September last year. Their resources are also stretched because rainfall has been scanty in entire Marathwada for the past three years. All reservoirs in the region are now almost dry or hold merely 5% of their capacity.

In Latur town, 60 million liters used to be pumped to residents every day, according to official claims. However, since January 2015, most households have been getting water in pipes only about thrice. Leaky pipelines and connections worsen the situation. “If fixed on time, Latur could have avoided this grave situation,” said former municipal chief engineer Mr.Suryakant Vaidya. “Water leakage in Marathwada region is about 60-80%.”

Municipal officials now want to get water from Ujani dam, 173 km away. At present, Latur receives water from a dam on Manjra River in Dhanegaon town, 55 km away. It has to pay some INR 120 million in electricity charges to haul the water. Critics have expressed doubts whether people who were unwilling to pay an annual water tax of INR 1800 would be willing to pay much more if the water has to be hauled from a much further 173 km.

Municipal corporations typically neither recover water taxes nor make up the cost of hauling water. Most are on the verge of bankruptcy. Experts say water mismanagement adds to the problems. For instance, models developed by M. Visvesvaraiya, a doyen of engineers in modern India, are neglected. “His energy efficient models are not at all liked by the recent decision makers. They adore high energy and capital-intensive water projects,’’ a Superintendent Engineer said on the condition of anonymity.

Water is better managed in developed economies. For instance, this is the ninth consecutive year of drought in Australia and fourth for some parts of America, which have forced more efficient and stringent models of management. Many such places have been able to reduce leakages from pipes to 10%, compared with as much as 50-60% in India. There is also need to efficiently recycle water. “It is high time we must learn that we may not get fresh water every day. Survival of Indian water management is possible in future only if we recycle wastewater,” said Sulakshana Mahajan, a Mumbai-based expert in town planning.

By Anjali Notandas
Concerned about the dangers of climate change and environmental degradation, children in India have taken to activism, demanding their rights to a better future
END_OF_DOCUMENT_TOKEN_TO_BE_REPLACED

By Soumya Sarkar
The rapid warming of the Indian Ocean due to climate change is leading to more cyclones pummelling South Asia, as storms gather more quickly and become more intense
END_OF_DOCUMENT_TOKEN_TO_BE_REPLACED

By Soumya Sarkar
The locust swarms that destroyed farmlands in western and northern India are linked to the warming of the Indian Ocean. Such proliferation is more likely as rainfall patterns change
END_OF_DOCUMENT_TOKEN_TO_BE_REPLACED

Pandemic chance to correct course on climate and health

By Omair Ahmad
Covid-19 has created an opportunity for policymakers to work together on health and climate change if temperature increase has to stay below 1.5 degrees Celsius
END_OF_DOCUMENT_TOKEN_TO_BE_REPLACED