Climate change will flood Kolkata’s streets more often, and the drainage function of its wetlands will be more vital; but civic apathy, hunger for real estate and unregulated industrialization are destroying this ecosystem that also feeds the city and cleans its sewage every day 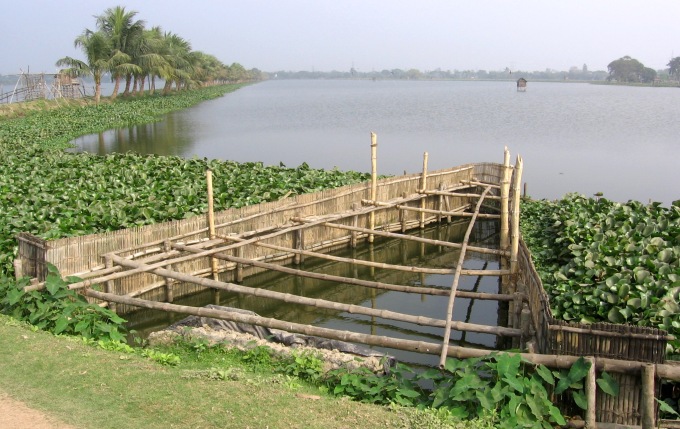 The famed bheries (fisheries) of Kolkata’s wetlands that produce about 10,000 tonnes of fish every year are under threat. (Image by Dhrubajyoti Ghosh)

Ask a Kolkata resident about the wetlands along the city’s eastern fringe and you’ll usually get a blank stare. Some may describe it as a swampy garbage dump, abode of mosquitoes. A few will remember their fish and vegetables come from there. Very few will be aware of the drainage service it provides to keep the city running.

The invisibility jumps at you on the Eastern Metropolitan Bypass, a 21km arterial road that roughly marks the boundary between thickly populated areas and the wetlands. There’s not a single billboard or sign that even acknowledges its presence or the unique functions it fulfils: treating the city’s sewage and producing much of its food.

Kolkata, like other cities in India and elsewhere in Asia, is expanding rapidly. Population in the metro and its suburbs rose by as much as 55% to 14 million in 2011 from nine million in 1981, according to the latest census. Amazingly, for a sprawling city of its size, the cost of sewage treatment is among the cheapest in the world due to the wetlands on its eastern fringes.

It is also virtually unnoticed that the carbon footprint of the food the city consumes is minimal because some 50% of the vegetables and fish are produced right in the backyard at startlingly low costs. The fish, for example, grow on free food in the form of algae from the wastewater treatment. About 10,000 tonnes of fish is produced in the bheries every year and 150 tonnes of vegetables are supplied daily to the city’s markets, official estimates show.

For all its usefulness, the Kolkata wetlands face a dwindling future from land sharks and unplanned, dirty industrialization. Of the two, filling up the large fishponds, locally known as bheries, and building on them present the greater danger.

The hunger for land for real estate development exerts a relentless pressure on this unique ecosystem of vegetable gardens and shallow fishponds that has been recognized as a Ramsar site since 2002. It is unique even among the world’s most prized wetlands in its sustainable symbiosis with a metropolis. A law barring new construction on the wetlands, which entered its tenth toothless year last month, has not dissuaded property developers. The instances are too many to be denied.

There have been recent reports of alleged illegal construction of a meditation hall by an organization associated with Sri Sri Ravi Shankar, a yoga guru who has been widely criticized for holding a jamboree on the flood plains of the Yamuna in Delhi. The authorities in Kolkata have registered a complaint. The non-profit, patronized by the wife of a prominent West Bengal politician, holds itself blameless. It says there was an existing structure before the ban on new construction came into effect; that structure has just been renovated, albeit grandly.

More instances are not hard to find. In Kharki village near Bantala in the wetlands, a 29 bigha (about 10 acres) bheri is being slowly filled up. “Everybody can see what’s happening but it’s nobody’s business,” says Ravi Shankar Bar, a resident of the village. Kharki is right now far from any residential development along the bypass but the situation could very well change in five to 10 years.

The East Kolkata Wetlands Management Authority, which was established in 2005, has virtually no control over what happens within its jurisdiction that is spread over 12,500 hectares. Most of the time, the authorities are reduced to filing police complaints when any illegal construction is brought to its notice.

As the city expands, “the wetlands are real estate in waiting,” says Dhrubajyoti Ghosh, a UN Global 500 laureate who has been a lone crusader for the wetlands for over 40 years. He explains that the tendency of filling marshes for habitation is only natural beside a big city. Ghosh cites the example of draining and filing up the Salt Lake, once the northern portion of the wetlands, to establish a planned suburb in the sixties. “But a balance has to be struck,” says the engineer turned ecologist.

As the situation on the ground stands right now, that precious balance seems to be missing. “Real estate is the most visible industry in the wetlands,” says Dhruba Das Gupta, Project Director at the Society for Creative Opportunities and Participatory Ecosystems (SCOPE), a non-profit that works with communities in the area.

What also riles the septuagenarian Ghosh is the illegal mushrooming of plastic recycling and leather processing units on land which were a few years ago fertile vegetable gardens. Over 50 plastic recycling units have sprung up in recent times.

On the stretch towards Bantala, more than 25 leather-processing units boil leather waste in huge cauldrons, emitting noxious fumes. It is then spread to dry and subsequently shipped to tea gardens as manure. “Leather units release effluents into the sewage canals that feed the bheries. It harms the fish,” says Das Gupta. The air pollution around the cauldrons is also intolerably high.

Sewage is diverted to the fish ponds near Bantala (foreground) while sludge is dredged (background). (Image by Soumya Sarkar)

These patently illegal units are conducting business openly. “They are not supposed to exist at all,” says Ghosh. But they do and hardly any voices are raised. Violence is never too far away in the wetlands, where laws of the land are often observed only in the breach.

The steady encroachment on the wetlands worries the communities that have been living here for generations. More than 120,000 residents, many of them vegetable farmers and fisher folk, are providing a useful service to the city, Das Gupta points out. There are also 5,000 local rag pickers who manually recycle Kolkata’s solid waste at Dhapa, the city’s garbage dump in the wetlands, a daily effort that has been lauded internationally. “They cannot just be pushed out,” she says. “It is unacceptable.”

Besides being a practically free, semi-natural waste treatment system and vegetable garden and fisheries, the wetlands also serve the vital function of an outlet to the frequent flooding that inundates Kolkata every monsoon. Since this doesn’t cost a penny, it is taken for granted. As our planet heats up, the risks of recurrent flooding rise significantly in many major cities, many studies show. Kolkata is prominently numbered among them and the wetlands even now provide a much-needed release. Shrinking it drastically to build houses is only inviting trouble, experts say.

In the end, if the East Kolkata Wetlands are to be saved in a meaningful way, there has to be heightened public awareness that the city sorely needs the wetlands for its own survival. If the people are indifferent, Ghosh asks, “What hope can be there for the wetlands?”

By Mayank Aggarwal
India proposes to open 52 new coal mines of at least one million tonne capacity each, which could increase the country's methane emissions by 45 million tonnes in 20 years
END_OF_DOCUMENT_TOKEN_TO_BE_REPLACED

By Soumya Sarkar
High heat and humidity will take an increasing toll in death and ill-health in India and other tropical countries unless global temperature rise is limited to 1.5 degrees Celsius
END_OF_DOCUMENT_TOKEN_TO_BE_REPLACED

By Deepa Padmanaban
Climate change has hastened the melting of snow in the Himalayas in recent decades, creating unprecedented vulnerabilities that scientists are yet to fully understand
END_OF_DOCUMENT_TOKEN_TO_BE_REPLACED

By Joydeep Gupta
Climate change made the Uttarakhand flash flood in the Indian Himalayas possible, and poor development policies on building dams and roads made it disastrous
END_OF_DOCUMENT_TOKEN_TO_BE_REPLACED

By Soumya Sarkar
The United Nations has warned that immediate action is needed to face the triple environmental emergency of climate change, biodiversity loss and pollution
END_OF_DOCUMENT_TOKEN_TO_BE_REPLACED

By Joydeep Gupta, Soumya Sarkar, Varsha Singh
As the world warms and glaciers retreat faster, there is need to brace for more disasters and minimise impacts by reviewing ill-planned dams and roads in the Himalayas
END_OF_DOCUMENT_TOKEN_TO_BE_REPLACED

By Deepa Padmanaban
Rising temperatures are changing the water cycle, with less water is being replenished in river basins in the Himalayas, which has serious implications for water security in India
END_OF_DOCUMENT_TOKEN_TO_BE_REPLACED