The return of the king

The famous Hilsa fish is in sharp decline across Asia due to overfishing, pollution and lack of water in the rivers, but Bangladesh is the one shining exception 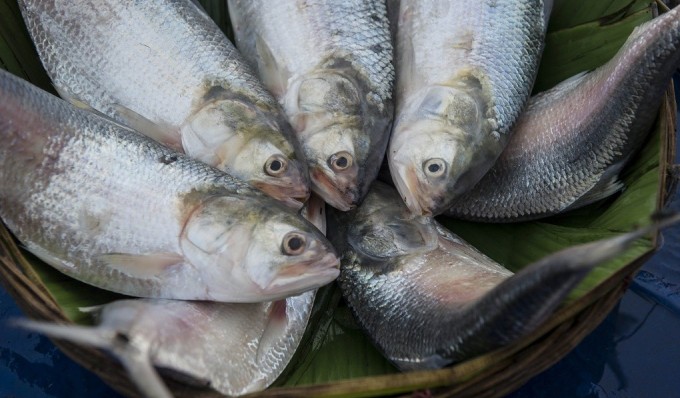 Hilsa fish at a market in Barisal, Bangladesh (Image by Finn Thilsted)

As New Year’s Day is celebrated in Bangladesh today, people have an extra reason to cheer. After many years, they can have their favourite fish Hilsa for lunch, dinner and maybe their afternoon tea as well.

In the many fish markets of Dhaka, that king of fish in Bengal — Hilsa (Tenualosa ilisha) — is not cheap by any means, it is not as large as the buyers would like it to be, but it is available in what has long been seen as off season. The demand is so high that a Facebook group has been created to encourage people to go easy on it. The group fears high demand is leading to overfishing of juvenile Hilsa, and that will affect the population. Not too many people seem to be listening, although Prime Minister Sheikh Hasina has promised not to eat any Hilsa on New Year’s Day.

Ironically, the reason for the availability was a total ban on Hilsa fishing for a few weeks last autumn and the autumn before that. The ban — during the season when the Hilsa migrate back to the sea — was bitterly resented by fishermen at the time, but they have been happy since then.

The Hilsa is not just a craze in Bengal on both sides of the India-Bangladesh border; it is also an integral part of local tradition and religious rituals. This species of shad is found in 12 Asian countries — from Kuwait and Bahrain in the west through Pakistan, India, Bangladesh, Myanmar, Thailand, Malaysia, Indonesia, Cambodia, Vietnam and China in the east.

Over the last year, Bangladesh is the only country in which the Hilsa population has gone up. Everywhere else, the fish that lives in the sea and in estuaries but goes upriver to spawn is in decline, thanks to overfishing and a sharp deterioration in both the quality and the quantity of the water coming down the rivers that the fish have been using for centuries.

Officials in the Bangladesh fisheries department say that on the Meghna — that giant river formed by the confluence of the Ganga and the Brahmaputra — the Hilsa catch from this winter was at least 50% higher than for the off season last year. They believe it is due to their Hilsa conservation programme.

“It is good news for us that the Hilsa catch has increased more than 50% this year,” says Anisur Rahman, director, Bangladesh Fisheries Research Institute (BFRI).

Though Hilsa has traditionally been caught from the beginning of spring, the height of the season is the monsoon, from June to September. In previous off seasons on the Meghna — in the stretch between Chandpur and Bhola, famous for Hilsa — a net 100 metres long and four metres wide would yield 3-8 kg of the fish per hour. From this winter it went up to 5-14 kg. Rahman says he has seen one fisherman catch even 20 kg in an hour.

Not all the Hilsa being caught are large. A mature Hilsa caught in this off season can weigh anything between 350 and 800 grammes, but many are smaller. Still, the officials are happy.

The main reason for the good catch is the ban on fishing at the height of the Hilsa breeding season, in the last week of October and first week of November. “It was very hard to impose the ban,” Rahman says. “But it proves that a good number of the Hilsa were able to spawn.”

The fact that the Hilsa needed protection did not permeate official consciousness in Bangladesh till 2002, when the annual catch slumped to 199,000 tonnes. It had been about a million tonnes till the early 1990s. Apart from the media furore caused by Hilsa-loving citizens, the slump had an effect on nutrition. Till then, the Hilsa was estimated to meet around 10% of fish protein consumption in Bangladesh.

The government started a Hilsa conservation project. Rahman led a study, the government accepted its findings, and in 2004 banned the catch of brood Hilsa as well as Jatka (as juvenile Hilsa is called) less than nine inches long, from November to June. The authorities said they would take three years to raise awareness among fishermen; the ban would be implemented in November 2007.

Another nursery where all fishing was banned between November and January was a 40-km stretch in Patuakhali’s Kalapara of another Meghna tributary — the Andharmanik river.

The government also banned the gill net, the net with small (38-51 mm) mesh that trapped all juvenile Hilsa and other small fish, including those for which there was hardly any buyer. This net had been popular with fishermen since the 1990s and was initially imported from Thailand. Later, hundreds of small gill net manufacturers mushroomed around Dhaka.

The government started to compensate the fishermen who would lose their income due to the ban. Half a million fishermen were registered and given 40 kg of rice every month. The trouble was, the money for this came from rich nations, and the grant ended in June 2015. Since then, the government has been able to support only 224,000 fishermen, though it does plan to start a full-fledged second phase.

Fishermen find the compensation inadequate. Fanibhusan Malo, secretary general of the Jatiya Matsajibi Samiti, a fishermen’s group, tells indiaclimatedialogue.net, “A five-member family needs at least three kg of rice a day. So in a month a fisherman’s family should get 90-100 kg of rice and at least BDT 1,000 (USD 12) in cash to meet other needs.”

Those who are not getting any compensation now are forced into illegal fishing, Malo adds. “Fishermen will not obey the ban unless the compensation is adequate and everyone is included.”

But the earlier overfishing had affected not just the numbers but also the overall migration pattern of the Hilsa. The fish population was almost wiped out from the Padma in the region just after the river enters Bangladesh from India. The fish were no longer migrating as far upstream as they used to. Just five decades, Hilsa would be found in around 50 rivers of the Ganga-Padma-Brahmaputra-Meghna basin. By the start of this century, the number had come down to ten.

Researchers say that apart from indiscriminate Jatka fishing, the problem was very low water levels in the rivers soon after the monsoon ended. As a result, the population was not recovering to the extent it should have. This prompted the government to go beyond the earlier zones and ban Hilsa fishing in all rivers, estuaries and even the sea — for 11 days in the autumn of 2014 and then for a fortnight in the autumn of 2015.

The result is there for all to see today. Not only do Hilsa aficionados have a happier Nobo Borsho (New Year) celebration today, the Hilsa is now again travelling up the Padma, going beyond the Bangladesh-India border, says Masud Ara Momi, deputy director, in the Department of Fisheries.

The Hilsa is known for the silvery sheen of its scales. With the Department of Fisheries claiming that in 2013-14 Bangladesh had around 60% of the global Hilsa catch, researchers say the silver can be translated into higher export earnings.

But there is a lot more to do for long term conservation of the Hilsa. Niamul Naser, professor at the University of Dhaka, has been researching Hilsa conservation under the Bangladesh-India ‘Ecosystems for Life’ project run by the International Union for Conservation of Nature (IUCN). A co-author of the report Migration, Spawning Patterns and Conservation of Hilsa Shad in Bangladesh and India — prepared as part of the project — Naser warns that a good catch this season does not mean it is going to be like this forever.

“We need to actually figure out whether we should catch as much fish as we can in the winter or whether we should limit this fishing,” Naser told indiaclimatedialogue.net. “In the past, we never had Hilsa between Lakshmi Puja (mid- to end-October) and Saraswati Puja (early- to mid-February). The last Hilsa would be consumed after a pair was offered to the goddess on Lakshmi Puja. This ban timed with the period when juveniles swam back to the sea from the river. It allowed the fish to grow large and procreate. Both Hindus and Muslims adhered to this.”

Mohammad Shahad, who was part of the IUCN project, pointed out that Hilsa conservation in the Bay of Bengal — and the rivers that flow into it — needs cooperation from Bangladesh, India and Myanmar.

“Though the Hilsa is not very popular in Myanmar, they get a good catch in the Irrawaddy river and export that. So if we want to conserve the Hilsa in this region, we need to include Myanmar along with the conservation efforts in Bangladesh and India.”

Tomorrow: No silver sheen in the Ganga

By Steve Cole, Erin Guiltenane
In the largest-ever study of glacial lakes, researchers have found that the volume of water in these lakes worldwide has increased by about 50% since 1990
END_OF_DOCUMENT_TOKEN_TO_BE_REPLACED

By Soumya Sarkar
The planet is losing biodiversity at an unprecedented rate, posing grave danger to human health and prosperity, the UN Convention on Biological Diversity warned in its flagship report
END_OF_DOCUMENT_TOKEN_TO_BE_REPLACED

By Soumya Sarkar
The chance of sudden, catastrophic river flooding in the western Himalayas has doubled as climate change leads to an increase in extreme rainfall events
END_OF_DOCUMENT_TOKEN_TO_BE_REPLACED

By Anjali Notandas
Concerned about the dangers of climate change and environmental degradation, children in India have taken to activism, demanding their rights to a better future
END_OF_DOCUMENT_TOKEN_TO_BE_REPLACED

By Joydeep Gupta, Karmistha Bhimwal
The floods, a disaster that Assam suffers every year, now deposit sand on farmlands along rivers because the fertile silt is held back by dams
END_OF_DOCUMENT_TOKEN_TO_BE_REPLACED

By Birsha Ohdedar
India should rewrite outdated, colonial laws and empower local people in the Sundarbans so that embankments to keep out the sea work for communities and nature
END_OF_DOCUMENT_TOKEN_TO_BE_REPLACED

By Soumya Sarkar
Increasing heat-related deaths due to climate change reveal an unequal world, with people in poorer countries at much higher risk, latest research shows
END_OF_DOCUMENT_TOKEN_TO_BE_REPLACED
Share This