Climate change and arsonists have been blamed for fires destroying large swathes of forest, but there is little talk of what the forest department should have done 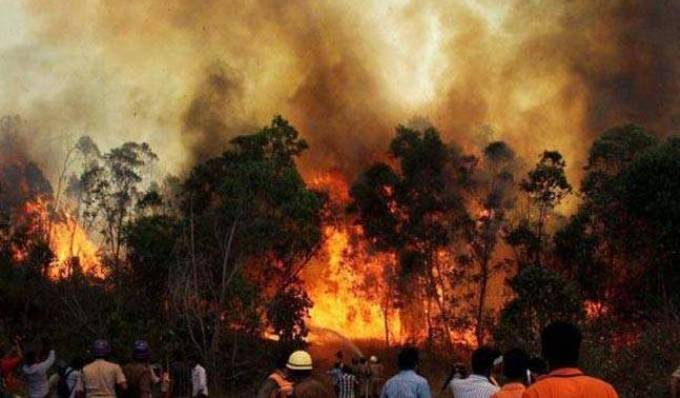 At least six people have been killed as nearly 400 separate forest fires rage in two states in the Indian Himalayas. Three men have been arrested and charged with arson. The Indian Air Force has been called in to spray water from its helicopters.

The fires, which started a month ago, have burned through 4,000 hectares in northern India as well as large parts of Nepal, with flames intensifying in recent days.

There is no count of the wildlife killed in the fires, and there may never be. In the state of Uttarakhand, the Corbett National Park has been affected, further endangering its tiger population. In the adjacent state of Himachal Pradesh, the world heritage railway line to Shimla — once the summer capital of British India — is endangered, and a residential school close to the railway line has been evacuated.

Fires dot the landscape on the border of India (right) and Pakistan (left) at the foothills of the Himalaya Mountains. (Courtesy: NASA)

While the police investigate if one or more of the fires had been started deliberately, the ongoing blazes have shown the forest departments of both states in poor light. Hemant Nautiyal, a resident of Rudraprayag in Uttarakhand, told indiaclimatedialogue.net that the usual fire-breaks in forests (gaps in vegetation to stop fire spreading) had not been completed at the beginning of this summer. He had been told by forest department officials that they did not have the budget to hire the temporary workers they usually do to create the fire-breaks.

Climate change has exacerbated the fires. In line with the forecast by scientists in the Intergovernmental Panel on Climate Change, the Himalayas — and the rest of South Asia — had two poor monsoons in 2014 and 2015. Last winter was also unusually mild, so that there is very little moisture in the trees or the soil below. This has allowed the fires to spread faster and wider.

While the current fires have been raging for weeks, they are by no means the first this year. The number of forest fires in the Indian Himalayas in the first four months of this year has exceeded the total number of fires last year.

Residents of Nainital, Almora, Ranikhet and other towns in the Kumaon region of Uttarakhand are now struggling with thick black smoke and soot that are moving ahead of the fires. Kanchan Bhartiyal, a resident of Ranikhet, told indiaclimatedialogue.net that local schools had been closed because everybody was staying indoors – they were finding it difficult to breathe outdoors.

On May 3, there were intermittent showers throughout Uttarakhand, which helped douse some of the smaller fires, but added to the smoke. The weather office has forecast more showers during the week, which may relieve the 1,100-odd people now busy fighting the blazes.

Afraid that the fires would spread to the town, many residents were storing water at home, while the men were helping forest department workers beat back the fires with green twigs, rakes, blankets, whatever they could lay their hands on.

Bhartiyal complained that none of the fire fighters had been given a mask, boots or any other protective gear.

Personnel from India’s National Disaster Response Force are also fighting the fires, and they do have protective gear, but there are only 400 of them on the ground. New Delhi has sent a team of four experts to Uttarakhand to direct the fire-fighting operation.

Locals helping to fight the fires say that small streams that used to meander through the forests have dried up, which is making their task more difficult. Bhartiyal said that apart from a dry winter and two poor monsoons, the streams have been diverted by hoteliers.

The soot flying all over the Himalayas now will hasten the melting of glaciers, which usually reflect a lot of the sun’s heat away from their surfaces. But with soot deposited on the ice, this reflecting power would go down, the glaciers would absorb more heat, and melt faster.

Apart from climate change, another reason for the fast spread of the fires is the indiscriminate planting of pines to fill quotas. Forest departments are given quotas by their ministers of the number of trees they have to plant, and they find it easiest to plant the pine, which grows faster than most other trees. By the end of last year, 16% of the areas classified as forests in Uttarakhand were pine plantations.

But the pine does not allow undergrowth, its cones are highly inflammable and its dries out the soil faster than broad-leaved trees such as the oak. Most of the fires now raging are in pine groves planted by the forest departments of Uttarakhand and Himachal Pradesh.

Some foresters have warned about this earlier. Last year, the Uttarakhand forest department officially recommended that pine plantations be cut down to reduce the risk of forest fires, but its recommendation was rejected by the state government.

There has been a lot of condemnation of a shadowy “timber mafia” being behind the fires, though very few media reports have pointed out that nobody can remove even a half burnt tree from a protected forest area without the connivance of bureaucrats. Most of the fires are in the protected zones.

In recent years, most of the deforestation in Uttarakhand and Himachal Pradesh has been due to the building of dams, roads and hotels. Vijay Singh, a resident of Solan in Himachal Pradesh, told thethirdpole.net that if a forest is burnt down, there is every chance that it will be reclassified as ‘non-forest’ land, which would enable hoteliers to build there.

Right now, however, hoteliers are very upset with the fires. It is leading to large-scale cancellations from tourists who usually flock to the cool hills from the baking plains in the Indian summer.

The Uttarakhand high court has issued a notice to the ministry of forest and environment seeking a detailed report on the extent of damage caused by the fires in the state and the steps taken to control the blaze. Uttarakhand is now under the direct rule of the central government.