Air pollution in cities is rising at an alarming rate, latest data from the World Health Organisation has shown, particularly in emerging economies like India, where high concentration of pollutants harm human health and hasten climate change.

Global air pollution levels rose as much as 8% in the five years between 2008 and 2013, according to the database released on 12 May. Fast growing cities in poorer regions are suffering the most. All the 300 plus cities in middle- and low-income countries reported alarming rise, often five times beyond safety limits.

Indian cities have some of the highest concentrations of particulate pollution, with as many as 14 cities among the worst 30, Bloomberg reported. China, which has been plagued by air pollution, has improved its air quality since 2011 and now has only five cities in the top 30.

Fast growing cities in Pakistan, Bangladesh, Saudi Arabia and Iran are also on the list of most-polluted urban areas with the highest levels of PM 2.5, tiny particles terrible for the lungs. 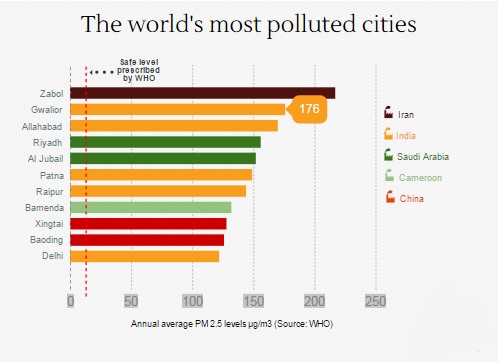 Very high levels of air pollution are “catastrophic for health”, Annette Pruss-Ustun, a co-author of the WHO study, told the Financial Times. Air pollution causes more than 3 million premature deaths worldwide every year, according to WHO, which on May 12 released the latest data on levels of particulate matter in 3,000 cities in 103 countries.

As urban air quality declines, the risk of stroke, heart disease, lung cancer and chronic and acute respiratory diseases, including asthma, increases for the people who live in them, the organisation said.

After Zabol in Iran, Gwalior and Allahabad in India are most polluted cities in the world. Patna and Raipur come in at sixth and seventh.

“This indicates air pollution is now a national crisis and needs strict and aggressive nation-wide action across all cities of India,” Anumita Roychowdhury, executive director at Centre for Science and Environment, said in a statement. It is worrying that cities outside India’s main urban centres are becoming more polluted, the Delhi-based think-tank said.

Delhi’s air quality has improved since it was ranked the world’s most polluted city in the WHO’s 2014 global database. The India’s capital city was ranked eleventh this year.

The annual average PM2.5 levels in Delhi have fallen by 20% since 2013. “Air policy action has started kicking in – with an environment compensation charge on trucks, action against other sources. We are responding to action but the levels are still very high in the city, it only shows that action has to be sustained to meet clean targets,” Roychowdhury told the Times of India.