The corals of the Gulf of Mannar off southern India have for now been spared severe bleaching as Cyclone Roanu brought the temperature down, but rising sea temperatures due to climate change pose a clear danger to the colonies 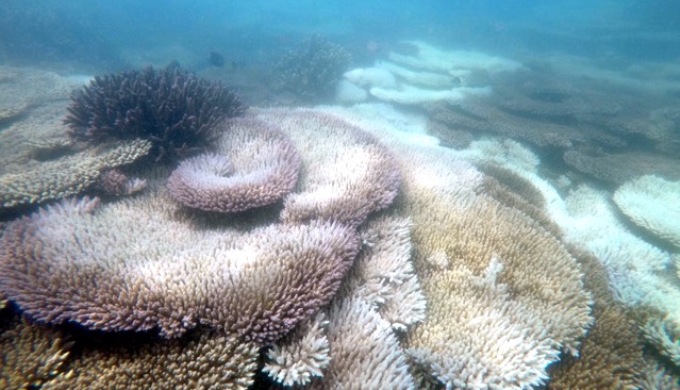 Bleached table coral in Gulf of Mannar (Photo by SDMRI)

With high heat and dry weather starting early this summer, the coral reefs off the 21 coastal islands in the GMBR started bleaching from March. The bleaching was intense and even the younger corals (recruits) were losing their colour. “These were dangerous signs and the trend was unprecedented,” J. K. Patterson Edward, Director of the Suganthi Devadason Marine Research Institute (SDMRI) based in Thoothukudi, Tamil Nadu, told indiaclimatedialogue.net.

“Even after Cyclone Roanu cooled the water, we found that the surface temperature was 30.2 degree Celsius,” observed Edward. “Since it reduced from the earlier range between 32.60 C and 33.50 C, we are hoping that there would be no further bleaching. If the temperature intensity had continued, we may have had high coral mortality.”

SDMRI has been monitoring the health of the corals in the GMBR since 2005, and the trends of 2016 were the worst till now. The institute had recorded coral bleaching every year from 2005 to 2010. The worst in this series was in 2010, when elevated sea surface temperature (32.20 C to 33.20 C) persisted for four months from April. This resulted in the coral cover decreasing to 33.2% due to severe bleaching and mortality. However, there was no bleaching between 2011 and 2015.

In 2016, the coral bleaching had started earlier and because of its high intensity, it was expected to result in high mortality. However, the current spell of unexpected rains could have come to the rescue of the corals. “We are hoping that there would not be further intensification of damage, and there could be improved recovery over time,” said Edward.

Considering the alarming trends this summer, the Tamil Nadu Forest Department had commissioned SDMRI to carry out rapid assessments of coral health once every 15 days. The last of the two assessment reports before Cyclone Roanu, prepared on May 2, 2016, presented an alarming picture.

“The latest rapid survey conducted on reefs around 11 islands recorded the average coral bleaching in the GMBR as 33% which is more than a five-fold increase in bleaching intensity, while it was more than eight-fold in Palk Bay within a 15-day interval,” noted the report. “The average water temperature recorded in the GMBR is between 32.60 C and 33.50 C with highest in Mandapam group of islands.”

What caught the forest department and the scientists’ attention was the fact that despite the coral mortality of 2010, there had been no adverse impact on younger corals that time. But this year, even the younger corals started bleaching early, and that sent alarm bells ringing, since that could mean a lower chance of recovery.

“We initiated the process of monitoring coral health every 15 days after we realised that this year’s bleaching was more intense than all the previous years,” said a forest department official. “We hope that a good monsoon will start the recovery process.”

Though the cyclone, which started as a low pressure near Sri Lanka, brought rain and reduced the temperature in the GMBR, it cannot be said that the sea temperature may not rise once its affect passes. According to Skymet Weather, the eastern part of Tamil Nadu could get deficient southwest monsoon, which could mean there could be more warm months before the northeast monsoon can bring rain at the end of the year.

Bleaching of corals does not necessarily mean death. However, they indicate increased heat stress on the colonies, leaving them vulnerable to climate variability and change. Bleaching happens in those corals that host symbiotic algae zooxanthellae in their tissue. While the algae have a surface to anchor themselves, they produce food through photosynthesis and also feed the corals. They also give colour to the corals.

When the water temperature rises, the corals get stressed. In the process the symbiotic relationship breaks down – either the corals eject the algae or the algae leave their host. Either way, the corals lose part of their ability to get food and also become vulnerable to other stresses. Some of the coral colonies succumb to these vulnerabilities and die.

In the Gulf of Mannar region, bleaching usually starts when the sea surface temperature goes up above 30° C, according to Edward. The coral reef areas are shallow with their depth ranging between 0.5 metres and 3 m below surface, where they experience temperature from 28 to 290 C across the year.

All over the world

In 2016, corals in many parts of the world have been bleaching. The Great Barrier Reef near Australia had reported unprecedented bleaching, with the convenor of the Australian National Coral Bleaching Taskforce, calling his recent aerial survey as “the saddest research trip” of his life.

Marine biologists from the Nature Conservation Foundation, monitoring the coral reefs of Lakshwadeep islands in the Arabian Sea, reported early and intense bleaching this year. However, the coral reefs in the Mahatma Gandhi Marine National Park in the Andaman and Nicobar islands were spared large-scale bleaching this year, according to Jaison John, range forest officer.

In Lakshwadeep, the corals were just about recovering from the mortality of 2010, and this year’s event could add to the trouble. However, where the Gulf of Mannar differs from Lakshwadeep is that its coral reefs are heavily fished. This reduces the population of fish that otherwise eat up the species of algae, sea urchins and starfish, which destroy the corals that are bleached and distressed. The coastal and marine waters between India and Sri Lanka – where the GMBR is located – is among the most intensively fished areas in the region.

The excess heat in the ocean temperatures around India and Australia this year is ascribed to the El Niño effect. Even though it is still being debated whether climate change can increase the frequency and intensity of the El Niño, its impact does make the coral reefs – and in turn the GMBR islands and the adjacent coast – vulnerable to climate change.

“The increase in temperature of the water due to climate change will add to the increase due to El Niño, thereby also worsening the impact,” Edward said. “The coral reefs of the GMBR provide a protected habitat to the fish in the region. When this habitat gets destroyed, it will reduce the fish catch and in turn affect the livelihood of the population in the region.”

Even while the memory of the 2004 tsunami is fresh in the minds of the people of Tamil Nadu coast, they keep experiencing high waves due to frequent cyclonic storms. If the bleaching of the corals had continued in its intensity, it could have meant danger. Cyclone Roanu did give a respite, though it is not still clear if there could be further damage as the Tamil Nadu coast waits for the monsoon.

By Mayank Aggarwal
India proposes to open 52 new coal mines of at least one million tonne capacity each, which could increase the country's methane emissions by 45 million tonnes in 20 years
END_OF_DOCUMENT_TOKEN_TO_BE_REPLACED

By Soumya Sarkar
High heat and humidity will take an increasing toll in death and ill-health in India and other tropical countries unless global temperature rise is limited to 1.5 degrees Celsius
END_OF_DOCUMENT_TOKEN_TO_BE_REPLACED

By Deepa Padmanaban
Climate change has hastened the melting of snow in the Himalayas in recent decades, creating unprecedented vulnerabilities that scientists are yet to fully understand
END_OF_DOCUMENT_TOKEN_TO_BE_REPLACED

By Joydeep Gupta
Climate change made the Uttarakhand flash flood in the Indian Himalayas possible, and poor development policies on building dams and roads made it disastrous
END_OF_DOCUMENT_TOKEN_TO_BE_REPLACED

By Soumya Sarkar
The United Nations has warned that immediate action is needed to face the triple environmental emergency of climate change, biodiversity loss and pollution
END_OF_DOCUMENT_TOKEN_TO_BE_REPLACED

By Joydeep Gupta, Soumya Sarkar, Varsha Singh
As the world warms and glaciers retreat faster, there is need to brace for more disasters and minimise impacts by reviewing ill-planned dams and roads in the Himalayas
END_OF_DOCUMENT_TOKEN_TO_BE_REPLACED

By Deepa Padmanaban
Rising temperatures are changing the water cycle, with less water is being replenished in river basins in the Himalayas, which has serious implications for water security in India
END_OF_DOCUMENT_TOKEN_TO_BE_REPLACED