Weatherman learns to warn, but must do better 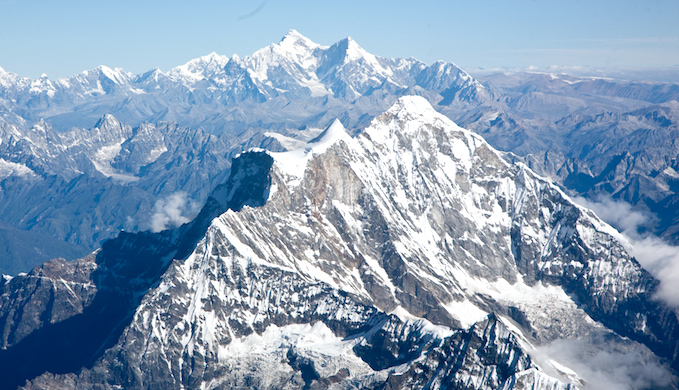 The snow is melting faster in the Himalayas. Photo by Ingmar Zahorsky

“If it rains immediately after a farmer applies fertiliser or pesticide; or irrigates the day before it rains, he incurs losses. By using the forecast to prepare a crop-wise, weather-wise and district-wise advisory for farmers, IMD (India Meteorological Department) helps them boost profits and cut down losses,” said N. Chattopadhyay, Head of Agriculture Meteorology Division at IMD.

He was talking about the Agromet Advisory or Gramin Krishi Mausam Seva for Indian farmers, a successful example of what the weatherman can do to help people adapt to climate change effects, such as an erratic monsoon.

In farming, deciding when to apply pesticides and fertilisers is of vital importance. Disseminating customised location and crop-specific information that can be acted upon is a weather service of the IMD that has now become a global model. Farmers have made an estimated incremental profit of 25% due to the Agromet Advisory, the National Council of Applied Economic Research claims.

However, in the event of an impending disaster, the weather services needed to get residents of mountain regions out of harm’s way are weak. This was seen during the 2013 flash floods in Uttarakhand and the 2014 floods in Kashmir. In both cases, the local weather office forecast heavy rain, but there was no system to ensure that this information would reach all residents likely to be affected. This is in sharp contrast to recent successful evacuations of hundreds of thousands from coastal areas before a cyclone hits.

In this backdrop, 50 experts from India, neighbouring countries, the World Meteorological Organisation (WMO) and other global institutions held a three-day meeting in Jaipur recently. They were trying to identify the challenges in meeting the weather service standard set under the United Nations-led Global Framework for Climate Services (GFCS).

GFCS provides a mechanism for coordinated actions to enhance the quality, quantity and application of weather services. It depends on five pillars — Observation and Monitoring, Research, Modelling and Prediction, Coordination and Capacity Development, and User Interface Platform.

“The observational data is fundamental in building numerical models used for weather and short-term climate forecasting, and for longer-term scenario-based projections of climate change. While there is steady progress in the observation and monitoring required for weather services, there is a big gap for such observing network for climate services,” said Sarat C. Kar from the National Centre for Medium Range Weather Forecasting, Ministry of Earth Sciences.

There is a special problem in the Himalayas, the largest store of snow and ice outside the north and south poles, and a source of 10 major rivers. The mountain range that stretches across Afghanistan, Bangladesh, Bhutan, China, India, Kyrgyzstan, Mongolia, Myanmar, Nepal, Pakistan, Tajikistan and Uzbekistan is warming more rapidly than the poles but the majority of the population living in the region, vulnerable to climate change effects, remains unprepared.

Temperatures will increase by about 1-2 degrees Celsius, in places by up to 4-5 degree Celsius, by 2050, more floods and droughts are expected and the monsoon is likely to become longer and more erratic in the region, according to a report titled The Himalayan Climate and Water Atlas: Impact of Climate Change on Water Resources in Five of Asia’s Major River Basins by the International Centre for Integrated Mountain Development (ICIMOD), an international non-profit, and others, that was published in December 2015..

At the Jaipur meeting, representatives from the National Centre for Antarctic and Ocean Research and IMD drew attention to significantly increased summer and winter temperatures in the Himalayas, resulting in an increased frequency and magnitude of extreme weather events such as flash floods, glacier lake outbursts, and shifts in monsoon patterns.

The obvious challenge in acquiring weather data here is that the highest peaks of the world are in the Himalayas, which is rugged terrain difficult to reach. Add to it the fact that the countries that share the Himalayas have problems sharing data. There is insufficient access to satellite data, rainfall prediction capability and hydrological and meteorological measurement stations in the Himalayan region, a need assessment survey for the development of South Asian Drought Monitoring System, compiled by Global Water Partnership, South Asia, reported in April 2014.

“The key gap is in data sharing. Data agencies have their own policies, often based on national legislation, restricting access to their data. The consultation (for the Himalayas and other High Mountain Regions) is an initiative is to foster collaboration; an institutional mechanism needs to be built for data sharing,” said Ram Boojh, Programme Specialist, UNESCO.

Overall, financial, human and procedural capacities needed to generate, archive and use climate data for decision making was inadequate in the region, the consultation concluded.

The other bottleneck the experts identified was translating the data into information that can be used by farmers, public health officials, disaster risk reduction managers, water resources administrators and others. In a paper, Climate Information Requirements For Community-Level Risk Management And Adaptation, Thailand based Regional Integrated Multi-hazard Early-warning System (RIMES) pointed out, “Although the need for orienting climate services to users has been generally agreed upon, the progress in these efforts needs to become operational soon.”

At the UN climate change conference in Paris, governments from all over the world recognised the urgent need for early warning systems for disaster preparedness in mountain ranges and the land around them to reduce peoples’ exposure to hazards that are rising in intensity and frequency, partially due to climate change.

Now that experts have identified the obstacles yet again, governments sharing the Himalayas and the rivers that flow down from them need to overcome the obstacles to ensure efficient meteorological service delivery. The matter is crucial, as floods, droughts and storms are becoming more frequent and more severe due to climate change.

By Soumya Sarkar
The rapid warming of the Indian Ocean due to climate change is leading to more cyclones pummelling South Asia, as storms gather more quickly and become more intense
END_OF_DOCUMENT_TOKEN_TO_BE_REPLACED

By Soumya Sarkar
The locust swarms that destroyed farmlands in western and northern India are linked to the warming of the Indian Ocean. Such proliferation is more likely as rainfall patterns change
END_OF_DOCUMENT_TOKEN_TO_BE_REPLACED

By Nambi Appadurai
We have to invest in resilience-building measures, especially in health infrastructure, and weather and disease forecast systems, addressing training and adaptive capacity needs
END_OF_DOCUMENT_TOKEN_TO_BE_REPLACED

By Joydeep Gupta
India is meeting its current unambitious pledge, but it is still pushing coal and failing to protect natural resources needed to protect people from the worst impacts of climate change
END_OF_DOCUMENT_TOKEN_TO_BE_REPLACED

By Lou del Bello
Developed countries are taking action to reduce their own carbon emissions, but they are not coughing up enough money to help vulnerable poorer countries do the same
END_OF_DOCUMENT_TOKEN_TO_BE_REPLACED

By Joydeep Gupta
US president-elect Joe Biden has strong popular backing to deliver action on climate change, which could provide impetus for countries worldwide to follow suit
END_OF_DOCUMENT_TOKEN_TO_BE_REPLACED