Although the free ArgoMet messaging service has enabled many farmers across the country to pare losses due to severe weather events, there is still scope to improve its reach

A storm brewing over a Kanakambara flower farm in Tamil Nadu. (Photo by Prabhu B Doss)

In October 2014, Cyclone Hudhud made landfall in Andhra Pradesh, inflicting heavy damage on Vishakhapatnam, Srikakulam and Vijayanagaram districts. As many as 25,000 people in 320 villages were affected, 22 persons died and mud and thatch houses were badly damaged.

For farmers in these districts, the timing was really bad. Farming, a high-risk livelihood, had once again fallen victim to the uncertainties of an extreme climate episode. Standing crops worth millions were affected. A few farmers in Srikakulam who had opted for free SMS alerts by AgroMet Advisory Service (AAS) provided by a consortium led by India Meteorological Department (IMD) were exceptions. Based on the alert provided by the service, they harvested their paddy crop in advance, averting monetary loss. They also passed on the AgroMet alert messages to his friends and relatives.

In the same month, warnings about Cyclone Nilofar affecting Gujarat was announced and the provincial government braced for a massive onslaught. Though Nilofar ultimately fizzled out, farmers had already been issued AgroMet Advisory alerts and prepared accordingly. Cotton farmer Kalpeshbhai from Patenala Muvada village in Sabarkantha district mobilised labourers and picked his entire matured cotton and shifted it to a warehouse, covering it with plastic sheets to prevent it from absorbing moisture. If he had not picked the cotton before the early onset of monsoon due to Nilofar, he would have lost entire cotton crop of about 2 tonnes, Kalpeshbhai, who uses only one name, told indiaclimatedialogue.net. This would have brought him a straight loss of INR 70,000 (USD 1,042), he said.

Such instances of preventing crop losses due to alerts issues by AAS, which covers almost all major crops like rice, wheat, cotton, pulses, oilseeds and sugarcane, are increasing. Since July 2013, the IMD in collaboration with Agromet Field Units (AMFUs) disseminates weather forecast and Agromet advisories to Indian farmers in both regional and English languages through an online farmers’ portal. The services are provided in collaboration with the federal farm ministry, IFFCO Kisan Sanchar Ltd and a host of private firms such as Reuters Market Light, Handygo, Nokia and Mahindra Samriddhi, among others.

In order to increase the number of farmers in the Kisan Portal, a system of registration through IMD’s website has been developed by the department and the National Informatics Centre (NIC) at Pune, the government’s information technology services provider, to provide weather-based advisories to a greater number of farmers through free phone messages. To avail this service, farmers are required to register their name and mobile number along with the crops. Once registered, the farmers receive SMS for their specific crops twice in a week — on Tuesday and Friday — as well as during extreme weather events. 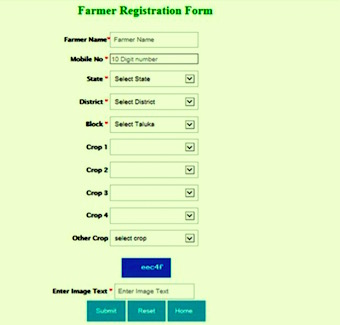 The advisory covers both regular climate information and climate hazards like hailstorms, cyclones, floods and others. Communication of climate hazards depends upon the nature of hazards. For example, cyclone warning can be given four days in advance. Heavy rainfall and hailstorm occurrences are given a couple of hours in advance.

A typical example of an AgroMet bulletin that helps mitigate the impact of adverse weather is the district specific weather forecast in quantitative terms for the next five days for weather parameters like rainfall, cloud, maximum and minimum temperature, wind speed and direction and relative humidity, including forewarning of hazardous weather events (cyclone, hailstorm, heat or cold waves, drought and flood) likely to cause stress on standing crops and suggestions to protect the crop.

The foundation of the AgroMet Advisory Service was laid in 2007 to help farmers use climatological information and information about weather variability to stabilise their yield, but the product has become more sophisticated in recent years by trying to target individual farmers.

“The main emphasis of the existing AAS system is to collect and organize climate/weather, soil and crop information, and to amalgamate them with weather forecast to assist farmers in taking management decisions. This has helped to develop and apply operational tools to manage weather related uncertainties through agro-meteorological applications for efficient agriculture in rapidly changing environments,” KK Singh, head of Agromet at the IMD, said in a report.

How does this work? The bulletins are issued at district, state and national levels. At the district level, based on the forecast products and crop information available from districts, the AgroMet Advisory Field Unit prepares district-wise farm advisories. The Ministry of Earth Sciences has set up a network of 130 AMFUs covering the agro-climatic zones of the country. Each agro-climatic zone covers on an average 4-6 districts. These units are operated in state agricultural universities, Indian Council of Agricultural Research institutions and Indian Institutes of Technology.

These units are responsible for recording agro-meteorological observations, preparing forecasts based on AgroMet advisories for the districts falling under the precincts of the concerned climatic zone and disseminating this information. The concerned university or institute appoints a nodal officer and a technical officer, who prepare the advisory bulletins in consultation with the panel of experts already created at these units. The AgroMet bulletins include specific advice on field crops, horticultural crops and livestock, which farmers need to act upon.

Though the primary target of the SMS service is an individual farmer, the AAS bulletins are used by a number of entities at the state and national level as well. For example, the state-level bulletin forms a significant input to the state-level weekly Crop Weather Watch Group meeting and used by the state government line function departments such as the fertiliser industry, the pesticide industry, irrigation departments, seed corporations, transport and other organizations that provide input to agriculture. The Ministry of Agriculture and fertiliser and pesticide industries primarily use the national level bulletins. At present, these bulletins reach 612 districts of the country.

“About 1.9 crores of farmers are getting the benefit of AgroMet Advisories under Gramin Krishi Mausam Sewa (GKMS) scheme of India Meteorological Department in the country,” Nabansu Chattopadhyay, Deputy Director General of Meteorology, Agricultural Meteorology, IMD, told indiaclimatedialogue.net. However, he also points out “challenges being faced in enrolment of farmers in Kisan portal for SMS services”.

Speaking on areas of improvement, Chattopadhyay points out that a “two-way communication for feedback is required for improvement. This helps in understanding real-time crop status and requirements of farmers. Inclusion of voice-based SMS is also an area of consideration though some of the service providers have this option. Besides, there is scope of improvement in extension agencies involving the different line departments including the Gram Rojgar Sevak, the climate manager at the village level”.

Conversations with farmers throw light on the challenges of lack of penetration. Goa, for example, has not been able to connect its farmers in less accessible locations to this free SMS service. “Information is needed about no rainfall days when fungicidal spray can be done to avoid fungal infection Kolerog, which makes areca nut fall prematurely,” Nilesh P. Velguenkar, a farmer staying close to the Mahaveer Wildlife Sanctuary in South Goa district who grows crops like areca nut, coconut, banana, black pepper and nutmeg, told indiaclimatedialogue.net by email.

Goan villages have not come within the ambit of these advisory services through any formal outreach mechanism of the meteorological office, he said. Till today, his most convenient source of climate-related information is the local language TV channel.

Another issue is relevance. Mahesh Patil, another cashew grower who also has interests in agro-tourism, knows about the SMS service but says that “it is of little relevance because the advisories come for crops not grown in Goa”. For the part of Goa where he farms, it is not just information on rainfall and spray of chemicals that is closely connected, pre-winter and winter temperature details will equip him with the knowledge of which pests will multiply, and what precautions he has to take, he told indiaclimatedialogue.net over telephone.

Fellow farmer Siddharth Tirodkar of Dabal village agrees. “Local news channels such as Prime TV and national news channels are just not enough as information providers. We get information regarding weather in Panjim and Margao, whereas ours is a hilly area is 25 km away from the Karnataka border and situated close to the Western Ghats. We get more rainfall here than the capital and appropriate climate-related and hazard-related information is needed for us. One must understand that farming is a village-based and not city-based activity. In fact, application-based climate advisories will be very useful for us,” he avers.

Krishi Ratna award winning farmer from Amreli in Saurashtra district of Gujarat, Timbadiya D Naranbhai, who grows cotton, pigeon pea, black gram and groundnut, seems to have put his finger on the root of the problem. “University aur kisan ke beech ka faasla reh hi gaya hai (the gap between the university and the farmer has remained),” he told indiaclimatedialogue.net.

“There are a number of universities in Gujarat but we have no knowledge of the SMS advisory service. My information comes from VTV News, the local channel. Fog at night is very destructive for cotton and can destroy 50-80% of my produce. I will not even get any crop insurance for this,” he said. “It would be helpful to have forecast on fog through this SMS alert service or any other agri-application service. In spite of existing institutions and infrastructure, the lack of access to information by the farmer has remained a problem.”

By Soumya Sarkar
In a promising outlook for light mobility, penetration of electric 3-wheelers in India may rise up to 75% by 2030, followed by 2-wheelers at 35%
END_OF_DOCUMENT_TOKEN_TO_BE_REPLACED

By Soumya Sarkar
Renewable power is surging despite the Covid-19 crisis and is on track to become the largest source of electricity by 2025, ending the dominance of coal
END_OF_DOCUMENT_TOKEN_TO_BE_REPLACED

By Anjali Notandas
Concerned about the dangers of climate change and environmental degradation, children in India have taken to activism, demanding their rights to a better future
END_OF_DOCUMENT_TOKEN_TO_BE_REPLACED

By Soumya Sarkar
The rapid warming of the Indian Ocean due to climate change is leading to more cyclones pummelling South Asia, as storms gather more quickly and become more intense
END_OF_DOCUMENT_TOKEN_TO_BE_REPLACED

By Soumya Sarkar
The locust swarms that destroyed farmlands in western and northern India are linked to the warming of the Indian Ocean. Such proliferation is more likely as rainfall patterns change
END_OF_DOCUMENT_TOKEN_TO_BE_REPLACED