We are all of two minds on climate change

A two-steps forward, one-step back approach to climate action plagues countries and corporations alike but there’s hope in influencing the younger generations, who will feel the full brunt of a warming world, into taking appropriate action 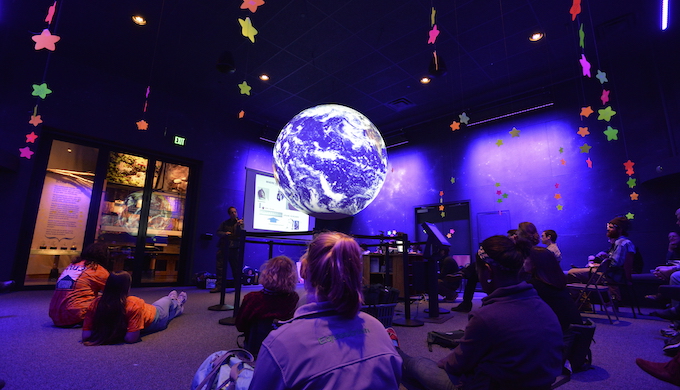 Students learning about climate change. (Photo by The Wild Center)

It seems every week reporters race to deliver more bad news about the climate. One would think such dire warnings would goad governments into action, and on the national level, the world seems united. But locally, the urgency just isn’t always there, and nations are promising change while still holding tightly to bad habits. For too many leaders making decisions in smaller communities — the counties, states, and provinces of the world — complex, global-scale problems do not resonate with their constituents.

It’s not that the science isn’t there. Since the industrial revolution, humans have added more greenhouse gases to the atmosphere than nature can remove, and we know with absolute certainty that this is keeping more of the sun’s energy trapped by the Earth’s atmosphere.

We can say with the same high certainty that the planet isn’t losing more energy to space, so it must be hiding this extra energy somewhere — whether as increases in global temperature, warming seas, melting glaciers, or other heat sinks.

But it’s not an easy task to translate scientific certainty into action and change the broader culture of climate response. Scientists don’t yet have Earth-system models capable of offering detailed predictions and projections at the fine scales needed for communities to make specific choices for existing resources. It’s even harder to project for the next few years or decades.

The Paris summit under the United Nations Framework on Climate Change led to historical agreement, with nearly all countries, rich and poor, committing to to reduce their carbon emissions. But the planet’s biggest obstacle may be the human mind. We humans are notoriously bad at managing too many crises at one time. All our good intentions tend to focus on one action while quietly letting other issues slide.

US President Barack Obama staked his personal reputation on getting countries like China and India to commit big on carbon reductions, while also upping the ante for the United States in terms of its own commitments to climate action. But Obama’s overall record on climate is not as rosy. Consider expansions of Arctic drilling, shale oil, and coal exports. The situation is similar in rapidly growing economies such as China and India, which are struggling to live up to their carbon commitments.

This two-steps forward, one-step back approach to climate action also plagues corporations. While the number of businesses committed to being greener and more sustainable is quite long, Volkswagen’s emissions cheating scandal is a clear example of a step backward, driven by profit. Other companies are just as guilty, as Mitsubishi admitted when it fessed up to faking emissions data for the last quarter century.

But profit isn’t the only motivator. While earthquakes and tsunamis are unrelated to climate change, the tragedy in Fukushima had unintended consequences. The loss of life due to the radiation leak from the nuclear plant forced Japan to rethink its strategy of relying extensively on nuclear power, with the abandonment of its commitment to the Kyoto protocol being the first (albeit not unexpected) casualty. The good news is Japan remains committed to fighting global warming, submitting a plan to reduce emissions by 25 percent by 2030 (relative to 2005 values).

As individuals, many of us are guilty of the same mixed commitments. Consider a Prius owner with a heavily meat-based diet. That individual can have the same, or even larger, carbon footprint compared with a vegetarian SUV driver. Food production is just as resource intensive in terms of its carbon footprint as energy consumption, which makes diet as important for global warming as any other factor.

Single action bias is a natural consequence of the human brain’s limitations, being only able to manage a finite pool of worry. Climate change tends to take the backseat when other pressing issues bubble to the top, making it even more important to avoid scary messages about climate change.

While global warming is already happening, and the impacts will continue to get worse barring any action, our ultimate salvation will not come from increasingly alarming messages or an approach based purely on expectations that humans wean themselves off the carbon-diet we have enjoyed since the Industrial Revolution.

The rational half of the human brain has already realized that climate change is a concern and we are responsible for it. But human decisions are not always rational. In fact, we mostly practice rational ignorance when the benefits to ourselves are not obvious. It is the emotional half of the brain that also needs to be convinced if decisions require attitude or behavioral change.

To break through at scale, we need to influence minds when they are still evolving. Teach students about climate change and its potential harmful consequences, but with the context of how their own decisions have mostly indirect effects, or consequences far in the future.

Too many students complain that most of what they learn in school is of no use in real life. But with experience, people have the hindsight to know that life is lived forward and understood backward — what may not appear useful in college may be a lifesaver later in life.

At the University of Maryland, I created an undergraduate course that looks at Earth, life and sustainability as a nexus. Life as we know it is carbon-based, the waste produced by life is also carbon-based and the energy we use is mostly carbon-based. Climate change is just a natural consequence of our own evolution and the evolution of our way of life.

But there is no reason to believe that a planet too warm for our own good is inevitable, or to think that we are not capable of evolving towards sustainability as the next natural step. If the signatories of the Paris climate summit are any indication, we’ve learned our lessons, and now we all need to get on the same page about dealing with them.

As a way to get my students to think differently, I ask them to address climate in the context of human nature. The results have been encouraging, with topics including how to fight climate change with religion, or presenting the argument that capitalism does not have to be harmful to the environment, as illustrated by the success of the organic food revolution.

It’s heartening that these are young undergraduates from various majors from biology to geology to philosophy to Chinese. Instead of just focusing on ocean acidification due to increasing CO2 and its harmful impact on corals, students focused on corals that are resilient to acidification and pursued the idea of using their genetic information to save suffering species.

The philosopher in the class argued that the issue of climate-change perception in the United States is essentially the same Pascal’s Wager against God — one can never reach a conclusion on God’s existence or lack thereof by rational arguments alone. But a rational approach can be had without focusing only on life choices, but positive outcomes.

Similarly, our efforts need not focus on convincing humans to accept climate change but bring about action by simply focusing on the positive outcomes of treating our planet with respect. This argument is strongly supported by the extensive survey of Americans reported in Global Warming’s Six Americas: Even people who do not believe in climate change support actions that are aimed at improving the environment, reducing energy costs, and taxing carbon emissions if taxes are used to clean up the environment. In fact, people who report that they are alarmed about climate change are not necessarily different in their appreciation of a healthy environment compared to those who do not believe in climate change.

Given scientific knowledge about a warming world and the human dimension of its impact, people can approach climate change from an honest and effective perspective, one based on human strengths and limitations. As developing countries continue to grow, their emissions will continue to increase. The best epiphanies about the deleterious impacts of emissions and actions to curb the increase in their carbon footprint are coming directly from individuals’ own climate experiences.

The developing world has a majority of world’s young population, the situation provides a unique opportunity to educate these individuals about how they can improve their quality of life without trampling on the quality of the air they breathe, the water they drink, or the food they consume. It is those younger generations who will feel the full brunt of a warming world, but if we are all honest about our worst, and best, habits, we can be honest about finding our way forward.

India’s climate diplomacy has to move up a gear

By Shi Yi
China’s first five-year plan since its 2060 carbon neutrality pledge last year fails to set an emissions ceiling, but draws back from economic growth at any cost
END_OF_DOCUMENT_TOKEN_TO_BE_REPLACED

By Moonis Ijlal, Shreeshan V.
New rules announced by the power ministry on selling surplus electricity from rooftop solar installations could hold back expansion of the sector that has seen slow growth
END_OF_DOCUMENT_TOKEN_TO_BE_REPLACED

By Joydeep Gupta
Climate change made the Uttarakhand flash flood in the Indian Himalayas possible, and poor development policies on building dams and roads made it disastrous
END_OF_DOCUMENT_TOKEN_TO_BE_REPLACED

By Soumya Sarkar
The United Nations has warned that immediate action is needed to face the triple environmental emergency of climate change, biodiversity loss and pollution
END_OF_DOCUMENT_TOKEN_TO_BE_REPLACED

By Jai Kumar Gaurav, Akshar Bhatt, Kundan Burnwal
A long-term low-carbon economic strategy can help a country to reduce policy uncertainty, which would help investment decisions by both the public and private sectors
END_OF_DOCUMENT_TOKEN_TO_BE_REPLACED
Share This