By submitting its ratification of the Paris Agreement to the United Nations, India has strengthened its position to ask rich nations to take immediate action to combat climate change. It will also have to start taking stronger action itself to meet its pledges 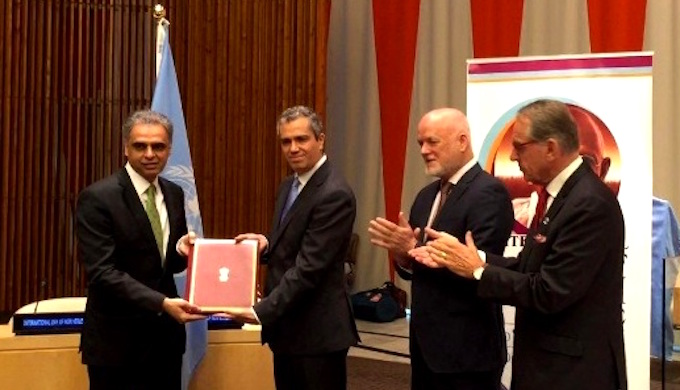 Syed Akbaruddin, India’s permanent representative at the United Nations, handed over the instrument of ratification of the Paris climate Agreement on October 2, the birth anniversary of Mahatama Gandhi. (Photo by Ministry of External Affairs)

With India submitting its instrument of ratification of the Paris Agreement to the United Nations on October 2, the birth anniversary of Mahatma Gandhi, it is almost certain that the agreement will come into force in a few weeks.

India, the world’s third largest emitter of greenhouse gases (GHG) causing climate change, is expected to be followed by the European Union within two days. The world’s top two emitters, China and the US, have already submitted their ratifications. Including India, 62 nations responsible for 51.89% of global GHG emissions have now done so.

The agreement will come into force 30 days after at least 55 nations responsible for at least 55% of global emissions submit their ratifications. The Paris Agreement becomes operational after 2020. The big holdout now is Russia, the world’s fourth largest emitter.

As for industrialised countries reducing their emissions right now, the US not a party to the Kyoto Protocol. Japan, Australia, Canada and other developed countries have walked out of their second phase commitments. The European Union appears to be the only one that will manage to keep its commitments, though many of its members will not do so.

The issue of providing money to developing nations is part of the historical responsibility of industrialised countries, which have emitted over 80% of GHG since the start of the Industrial Age. India has been hammering this point home for decades, but with little result. Climate justice finds only grudging and passing mention in the Paris Agreement. On the question of money, the Green Climate Fund – now the main vehicle for climate finance – has a little over $10 billion in its kitty and has managed to launch only nine projects so far.

Green technology transfer at no cost or low cost is an issue that most industrialised countries are not even willing to discuss, citing patent laws. In practical terms, this may not matter much for emerging economies; the Confederation of Indian Industry has estimated patent fees comprise less than 5% of project costs in the area of renewable energy. But the issue is of importance to Least Developed Countries and India wants to continue being seen as their champion in climate negotiations.

Clearly, all the contentious issues in the run-up to 2020 are still on the table. On top of that, the Paris Agreement rests on individual country pledges that are too weak to combat climate change effectively. The agreement says the world should keep global warming to within two degrees Celsius average temperature rise, and strive towards 1.5 degrees. But the country pledges add up to a warming between 2.7 and 3.5 degrees Celsius.

As Sunita Narain, head of the New Delhi-based think tank Centre for Science and Environment (CSE), points out, impacts of climate change are already devastatingly clear with a global temperature rise of around one degree Celsius on average. Evidently, the Paris Agreement needs to be strengthened. Still, it is a start, and has been hailed as a triumph of diplomacy.

To meet its commitments under the Paris Agreement, there are three big things that India needs to do, as detailed in its Intended Nationally Determined Contributions, which were submitted to the United Nations Framework Convention on Climate Change (UNFCCC) exactly a year before the country handed over its instrument of ratification. These are: reduce its GHG emissions intensity by 33-35% by 2030; generate at least 40% electricity from non-fossil fuel sources by 2030; and create additional carbon sink of 2.5-3 billion tonnes by planting trees.

The natural increase in efficiency of Indian industry will take care of about half of this emissions intensity reduction, if the trajectory since the late 1990s is maintained. Three independent think tanks and university departments, asked by the Ministry of Environment, Forests and Climate Change to study this pledge, have come to similar conclusions.

Large factories belonging to Indian and multinational corporations are moving towards more energy efficiency – and consequent reduction in emissions intensity – largely because they are aware of possible tightening of regulations. The big gap is in the area of medium, small and micro enterprises (MSME), which together account for around 80% of India’s industrial output.

Implementation of regulations is lax in the MSME sector, and many entrepreneurs are unable or unwilling to invest in more efficient machinery, though they know about the savings in their own energy bills. There is a case for stronger government intervention here.

Two other big areas are crying out for improvement – electrical appliances in the domestic sector, and more efficient new buildings. The Bureau of Energy Efficiency has done a lot of work in classifying electrical appliances by efficiency, but the uptake by manufacturers and buyers needs a big push; so do the new building codes developed by international and Indian rating agencies. It has been estimated that 70% of the buildings that will stand in India in 2030 are yet to be built – so this is an obvious area for improvement. The work that has progressed very well is expansion of LED lighting – over 165 million LED lights have been distributed under various government schemes.

As for generating at least 40% of its electricity by 2030 without using coal, oil or natural gas, India has the world’s most ambitious programme – to generate 100 GW each through solar and wind and more through biogas by 2022. Prime Minister Narendra Modi has advanced this deadline to 2020, though official documents continue to refer to the later deadline.

Right now India’s solar generation capacity is 8.5 GW and wind 27.6 GW, so there is a need for considerable acceleration. The plan will not work unless state-owned electricity distribution companies change their attitude. Right now, they are reluctant to buy power from renewable energy generation firms. Even when they do so, they are badly in arrears in their bill payments, including the mandatory renewable purchase obligation money.

Of the 100 GW solar plan, 40 GW is supposed to be generated through rooftop installations, and this is another area that is not progressing as well as it should, largely due to bottlenecks at local municipality and distribution company levels.

The big confrontation will come in the area of hydropower. To meet the 40% electricity generation through renewables commitment, the government has counted hydropower among renewable energy sources. But environmentalists and residents are often strongly opposed to large hydropower projects, especially in the Himalayas, where most of the planned projects are located. Many projects are facing huge time and cost overruns.

Increasing India’s carbon sink by 2.5-3 billion tonnes by 2030 is an equally daunting challenge. This can be done only by increasing the number of trees in a country that is overpopulated and where land is a really scarce resource. The country now has a little over 24% of its area under forests, and to meet its pledge will have to increase this to 33%. This does not seem very likely from a government that prides itself on being business-friendly and has been pushing the cutting down of forests for various industrial and infrastructural projects.

The other, and more doable, option is to significantly increase tree cover in degraded forests. But this has to be carried out very carefully to avoid invasive tree species. Afforestation programmes in India have often suffered from this problem.

The one bit of good news is that there is no shortage of money to plant trees, thanks to a regulation that obliges industrialists to pay compensation when they cut trees for their projects.

From the average Indian’s point of view, handling the immediate impacts of climate change is probably more important than meeting international obligations. The biggest impact now is an increase in the uncertainty of water supply – there is either too little or too much. Regulating the extraction of groundwater is an immediate need. But due to political compulsions there is no move towards it.

Another area being immediately impacted is agriculture, with crops unable to withstand higher temperatures, or sudden changes in water supply or both. Indian researchers have been doing commendable work in developing crop varieties that can withstand these stresses better. But their work is not being carried to farms with a fraction of as much urgency as is necessary.

There are formidable challenges ahead. Still, India has taken an important step by ratifying the Paris Agreement. There was a time when observers were unsure whether India would take this step soon, and now there have been a few reports of India giving in to pressure, mainly from the US.

However, Anil Madhav Dave, India’s Environment Minister, denied any pressure. “There were two things on our minds before we reached the decision to ratify,” he told journalists a day before the ratification was submitted to the UN. “First, we wanted internal consultations on how this decision would affect our laws. We also wanted to see whether our interests are taken care of when we go forward to implement the Paris deal.”

Most green NGOs in India were also supportive of the move. Sandeep Chachra, Executive Director of ActionAid India, said, “This year India and its citizens have been on the front line of climate change. This effort to fast-track the entry into force of the Paris Agreement is a clear indication that India both wants and needs urgent action at home, and internationally.”

“India now has a vital role to play in ensuring that its hard-won inclusion of climate justice in the agreement becomes a key outcome and not just an empty phrase. In the next round of UN talks in Morocco this November, it must make sure that the next steps that will be negotiated really do reflect fairness and equitable action for all.”

This point was emphasised by the CSE, whose deputy head Chandra Bhushan said, “Ratification is just the beginning of tough and difficult negotiations ahead. India will have to pay an important role in making Paris Agreement effective and equitable.”

By Joydeep Gupta
US president-elect Joe Biden has strong popular backing to deliver action on climate change, which could provide impetus for countries worldwide to follow suit
END_OF_DOCUMENT_TOKEN_TO_BE_REPLACED

By Chetan Pandit, Asit K Biswas
India's civil society now has an opportunity to chart a new course of action that ensures water security through a balance between hydrological needs and environmental safeguards
END_OF_DOCUMENT_TOKEN_TO_BE_REPLACED

By Soumya Sarkar
The planet is losing biodiversity at an unprecedented rate, posing grave danger to human health and prosperity, the UN Convention on Biological Diversity warned in its flagship report
END_OF_DOCUMENT_TOKEN_TO_BE_REPLACED

By Olive Heffernan
With a range of marine geoengineering field trials moving forward, attention is turning to how research and eventual deployment should be governed globally
END_OF_DOCUMENT_TOKEN_TO_BE_REPLACED

By Bhasker Tripathi
Implementation of the clean air plans for India's cities can work if there are legal mandates, clear targets and accountability, coordination and sufficient funding
END_OF_DOCUMENT_TOKEN_TO_BE_REPLACED
Share This