The agreement to control carbon emissions from civil aviation is the first-ever global climate pact after the Paris summit in December 2015. (Photo by Enrique)

The general assembly of the United Nations aviation agency has overwhelmingly agreed to reduce greenhouse gas emissions from international flights amid strong reservations by India. The world’s fastest growing major economy fears that any market-based measure of carbon offsets would increase costs for developing countries and reduce accountability of historically more polluting nations.

India will not participate in the voluntary phase of the global market-based measure (GMBM) to offset carbon emissions from international flights. It had rejected the proposal of International Civil Aviation Organization (ICAO) on GMBM in the run-up to the Montreal meeting. More than 60 of ICAO’s 191 member countries, including Canada, China and the US, agreed to voluntarily participate in the programme between 2021 and 2026.

“A deal on civil aviation emissions is one positive signal but it has to be operationalised in a way that countries are not absolved of their historical responsibilities,” Arunabha Ghosh, Chief Executive Officer of the Council on Energy, Environment and Water (CEEW), a Delhi-based think tank, said in a statement. “Developing countries, which have nascent aviation sectors, should receive incentives for using more efficient aircraft even as the aviation sector grows in line with their economic development.”

“The interests of poor and developing countries should be taken on board in the development of the global market-based measures,” India’s environment minister Anil Madhav Dave had said in August when ICAO President Olumuyiwa Benard Aliu visited New Delhi. The pact becomes mandatory in 2027.

The ICAO recognises the rising costs. It estimated that an operator could have to pay as much as USD 2.66 to USD 18.82 per ton of CO2 emitted to achieve carbon-neutral growth by 2020. “The more important questions in this context are regarding how operators would process this additional cost, and whether this would be passed on to the consumers,” Manu Aggarwal, a researcher at CEEW, told indiaclimatedialogue.net. “If these costs are absorbed by some of the well-established operators the subsequent effect on Indian operators could be severe losses, either in the form of lost market share or losses due to cost absorption.”

India’s stance is likely to be taken seriously as it has been seen to take proactive steps to tackle climate change in recent times. The South Asian nation on October 13 said at a global meet in Africa that it has enacted a law to stop emissions of HFC-23, a gas that is thousands of times more harmful than carbon dioxide. On October 2, the Narendra Modi government ratified the Paris Climate Agreement, which aims to limit the rise in global warming to “well below” two degrees Celsius.

Delegates at the ICAO conference took two weeks to October 7 to work out an agreement that makes the international aviation sector carbon-neutral by 2020 and then bring down emissions to 2005 level by 2050. The aviation industry is responsible for 2% of global greenhouse emissions, according to Carbon Brief, an information provider. Also, air travel is likely to double by 2030.

The GMBM provisions relate to the common but differentiated responsibilities and respective capabilities (CBDR-RC) principle agreed upon at the Paris Climate Summit in December 2015, which ask the rich nations to cut emissions on priority because they have been historically bigger polluters. An offset programme, on the other hand, imposes an economic burden on developing countries such as India and Brazil trying to expand their aviation sectors. 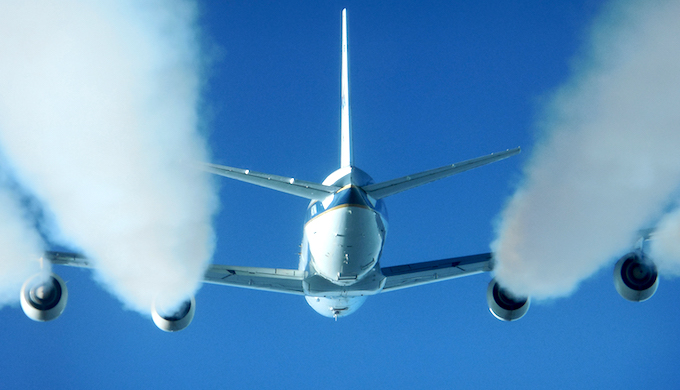 Aviation represents 2% of global emissions but is expected to grow to 3% by 2050. (Photo by NASA)

The Montreal pact is the first global carbon-reduction deal for an entire industry. Trade lobby groups Trade supports the agreement although it might eventually cost aircraft manufacturers and airline firms around USD 24 billion every year, according to Bloomberg. The annual cost may be USD 23.9 billion by 2035, or 1.8% of projected revenue, Bloomberg said.

“This agreement ensures that the aviation industry’s economic and social contributions are matched with cutting-edge efforts on sustainability,” Alexandre de Juniac, director general of the International Air Transport Association, said in a statement.

The carbon offsets are at the centre of the contentious GMBM scheme, which environmentalists say have been diluted at the Montreal meeting along with CO2 standards. The onset of GMBM has been pushed back to 2027 rather than the earlier proposed 2020, resulting in significant additional CO2 emissions from civil aviation remaining unattributed.

“ICAO’s Committee on Aviation Environmental Protection, which decides efficiency standards, has already unanimously decided a weak CO2 standard, which will not significantly penalise operators which have an old less efficient fleet, as compared to Indian operators that will have a significantly newer and more efficient fleet in the coming years,” Aggarwal said.

The final text of the deal has not yet been made public. However, the shift from the sector-specific approach in the earlier draft text to individual offsetting starting from 2030 in the latest one absolves developed nations of their historical burden of emissions, Aggarwal said.

“If implemented in its current form, it will put considerable costs on developing countries like India whose aviation sector is expected to see very high growth in the coming years,” he told indiaclimatedialogue.net. “The Montreal pact could affect Indian airline operators’ fleet expansion plans if West Asian carriers don’t pass on the increased costs to price-sensitive Indian customers. If this dynamic plays out, it will affect the National Civil Aviation Policy’s growth targets in the passenger and cargo segments.”

India is expected to have 10 billion revenue tonne kilometres (RTKs) from international aviation by 2020, which is expected to touch 20 billion RTKs in the short to medium term, according to a CEEW analysis. RTKs are defined as utilized capacity for passengers and cargo expressed in metric tonnes, multiplied by the distance flown.

The GMBM scheme aims at carbon-neutral growth after its mandatory adoption in 2027, which means India would have to at least bear the burden of offsetting emissions to compensate for nearly 10 billion RTKs annually by 2030, CEEW said.

According to Aggarwal, India needs to stress upon the non-market based measures such as a more stringent global CO2 standard and more resources from the developed countries for development of alternative biofuels.