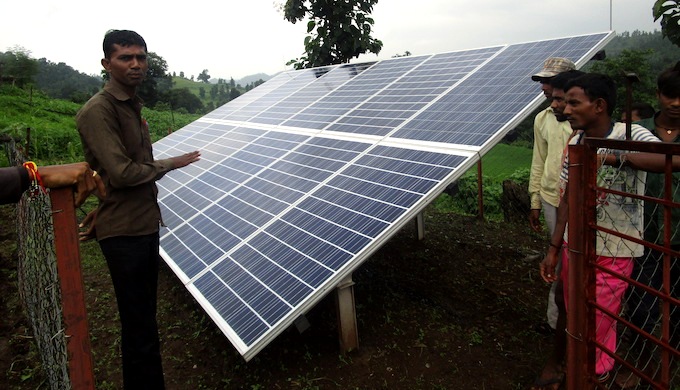 For Rakmi Bachusdore, a 60-year-old woman of the MaThakur tribe from Bhojpada village, the onset of summer was the harshest. “After March, there was no water in or around our village. The only well dried up completely and even the nearby stream had gone bone dry. For almost two months of peak summer, I could not sleep in the nights worrying about fetching water the next morning,” said Bachusdore, whose village of mostly indigenous residents is located in Palghar district of Maharashtra, western India.

Every morning, after completing household chores, Bachusdore would leave home and walk two to three kilometres to the dried up stream and dig it, and then wait for the water to appear. “It used to take me hours to fill one pot of water as there would be a long queue of women.”

Her misery came to an end in May when an off-grid solar-powered water filtration system was installed in her village by the NGO Aroehan, which works in Palghar, about 160 km north of Mumbai. Bachusdore now walks a few steps and fills water from the tap connected to the solar filter that provides round-the-clock clean drinking water to the 450 residents of Bhojpada.

Bhojpada is in Mokhada block, an area of basalt hills. The rock does not allow rainwater to seep and replenish any aquifer. Rainwater flows down the slopes at high speed. “Mokhada receives over 2,500 mm of rainfall in a year (as high as Mumbai), but the villagers face acute drinking water shortage in the summer months,” says Rahul Tiwrekar, an advocate and consultant with Aroehan. He is also a member of the Prime Minister’s Rural Development Fellows (PMRDF) group.

During the four months of monsoon, a large number of local streams and rivulets, such as Devbandh, Botashi and Pinjal, come alive in the region, but all the water sources go dry by February-March, forcing women to walk long distances to fetch water. Poor quality of water also means frequent cases of gastroenteritis in the villages.

Palghar district does have large water storage structures. There are the Upper, Lower and Middle Vaitarna projects. But that water is meant exclusively for Mumbai city, leaving the local population high and dry, says Balchandra Salve, coordinator with Aroehan. The Municipal Corporation of Greater Mumbai now plans to build two more dams — Gargai and Pinjal — in Palghar to quench Mumbai’s ever-growing thirst.

To deal with the water crisis, Aroehan is setting up off-grid solar-powered water filtration systems by raising funds under the corporate social responsibility (CSR) programmes of various companies, such as Siemens India.

A typical system consists of a set of solar panels connected to a motor that pumps water out of a well into a large overhead tank in the village through a network of underground pipes. A light-weight and compact water filtration unit – SkyHydrant – is attached to the overhead tank, which filters the water and supplies to various taps in the village. The filtration unit does not need electricity to function. Water from the overhead tank is delivered to the taps via gravity, thus reducing energy consumption.

The well of Bhojpada is located over one kilometre downhill of the village. Village women used to walk to the well every day and then climb up a kilometre with water pots balanced on their heads. By February, the well would go dry.

Now the solar-powered water filtration system has transformed their lives. The 3 kW capacity solar panels, attached to a 2 horsepower pump, lift water from the well and fill the 5,000 litre overhead tank in the village. This water then passes through a membrane inside the SkyHydrant filtration unit, providing clean drinking water. “We chose SkyHydrant filtration unit because unlike the UV/RO systems, it does not need any electricity. Also, the membrane inside the filter has a guarantee of 25 years,” says Tiwrekar.

The cost of entire Bhojpada project is INR 4.5 lakh (USD 6,735), which has been funded through corporate philanthropy. Residents contribute as well, though voluntary labour. They have now cleaned the well and plastered it to minimise leakage. They have also laid all the pipes.

“We did shramdan (voluntary work) to lay underground pipelines, which is our contribution towards our drinking water system,” says Bhau Bacchu Dore, a farmer who lives in Bhojpada. Soma Sakru Gavunda, another farmer, informs that he donated one guntha (1/40 of an acre) of his land to set up the overhead water tank and filtration system.

Since running and maintaining the water system is a daily task, a residents’ committee has been set up. Members are trained to operate the system. “A person needs to switch on the system which allows water to be pumped up from the well to the overhead tank. Once the 5,000 litre capacity tank is full, the switch needs to be turned off,” informs Dore.

According to him, during summer days with bright sunshine, the overhead tank fills in 2.5 hours. In the rainy season, it takes about four hours to fill the tank, which meets the drinking water needs of the entire village for two days. Apart from managing the system, members of the committee clean the solar panels once every 15 days and the membrane of the filtration unit once a month with chlorinated water.

“After installation of the water system, its rights are transferred to the village panchayat so that there is a sense of ownership,” informs Tiwrekar. The committee has a bank account, where each household deposits INR 25-50 per month. “The money thus collected can be used later for maintenance of the system,” adds Tiwrekar.

This is the first year of functioning of the water filtration system in Bhojpada, but villagers have already made future plans. “Next, we will construct a bandhara (check dam) on our local stream, which will slow down the run off and provide us water for additional days of summer,” says Dore.

Salve informs that constructing a sub-surface check dam downstream of the village well will also be beneficial, as it will raise the water table in the well.

Bhojpada is not the only village in Palghar benefitting from an off-grid solar-powered water filtration system. There are 12 such water systems in Mokhada and Jawhar blocks of Palghar district. In Amle village of Mokhada, the 12-kw system not only meets drinking water needs, but also lights up households and streetlights, and provides irrigation water to 53 farmers. Three more off-grid solar-powered water filtration systems are being built. “If we get support from the government or the corporate sector, we can replicate this low-cost, low-maintenance water supply system in other villages of the district,” says Tiwrekar.

By Soumya Sarkar
The chance of sudden, catastrophic river flooding in the western Himalayas has doubled as climate change leads to an increase in extreme rainfall events
END_OF_DOCUMENT_TOKEN_TO_BE_REPLACED

By Anjali Notandas
Concerned about the dangers of climate change and environmental degradation, children in India have taken to activism, demanding their rights to a better future
END_OF_DOCUMENT_TOKEN_TO_BE_REPLACED

By T.V. Padma
People in the middle ranges of the Indian Himalayas are the most vulnerable to climate change and they are finding it difficult to adapt to the changed weather patterns
END_OF_DOCUMENT_TOKEN_TO_BE_REPLACED

By Shikha Bhasin
Proper servicing is key to efficient running of environment-friendly cooling systems, demand for which is expected to surge as temperatures rise across India
END_OF_DOCUMENT_TOKEN_TO_BE_REPLACED

By Kamal Prakash Seth
As the biggest consumer of palm oil, India can take a lead in demanding ethical palm oil production that can stop deforestation in southeast Asia and reduce air pollution
END_OF_DOCUMENT_TOKEN_TO_BE_REPLACED

By Sapna Gopal
The growth in the wind sector has been slowing for the past few years in India; this has now been compounded by disruptions due to the Covid-19 pandemic
END_OF_DOCUMENT_TOKEN_TO_BE_REPLACED

By Joydeep Gupta
Protecting just 30% of earth's land and sea could result in financial benefits of nearly USD 235 billion every year by 2050, even without accounting for ecosystem services
END_OF_DOCUMENT_TOKEN_TO_BE_REPLACED