Photo feature: Returning power to the people in Himachal Pradesh

The annual winter festival of the resident deity in Lippa. (Photo by Manshi Asher)

The Indian state of Himachal Pradesh has about a quarter of the country’s hydropower potential. It has an installed capacity of a little over 10,000 MW out of its full potential of over 27,000 MW. While the last decade saw a surge in hydropower development in the state, for the last three years the state government has been making desperate attempts to revive the hydropower sector.

Falling revenues, the lack of interest of the private sector in taking up any new projects, the inability of existing projects to be completed on time, the rising cost of hydropower, and the social and environmental impacts leading to local resentment are some of the indicators that the government seriously needs to review its unrelenting faith in hydropower development as the driver of the state’s economy. But instead of taking a critical look at the hydro policy the government has kept the focus squarely on easing the environment for developers.

On 4 March 2014 the state government’s Power department issued a notification on amendments to the Hydropower Policy 2006 doing away with the requirement of separate No Object Certificates (NOCs) the from Public Works Department (PWD), the Irrigation & Public Health Department (IPH), Revenue Department, Fisheries Departments and Gram Panchayats (village level elected bodies).

On 17 August 2016 this notification was issued again with the intention to fast track clearance procedures. Last year approximately two dozen groups and community representatives made a submission objecting to these amendments especially to the dilution of the NOCs of local village councils stating that it was in violation of the provisions of the Forest Rights Act 2006 which is yet to be implemented in the state. Despite this the government went ahead with the changes.

The Himachal government has also dragged its feet on the implementation of the Forest Rights Act, precisely because it is worried about its provisions being an obstruction for hydro-development. And now on 24 September the Cabinet of the Himachal government approved a proposal regarding non-applicability of the Forest Conservation Act, 1980, in the Scheduled Areas of Kinnaur, Chamba and Lahaul-Spiti for a period of two years. Amidst such a dismal scenario, the people of a small non-descript village in far-away Kinnaur, who challenged the forest clearance for the Kashang Hydropower project, have been in the news for getting their voice heard.

A village in the Himalayas

Article 51 A (g) of the Constitution of India imposes upon every citizen, the duty to protect and improve the natural environment including forests, lakes, rivers and wildlife, and to have compassion for living creatures. The National Green Tribunal quoted this article in May 2016 in a judgment on the Integrated Kashang Hydropower Project in Kinnaur, and expressed, “a deep sense of foreboding and serious anxiety on the future of the state and its progeny” in the context of the number of hydropower projects coming up in the state and the subsequent ecological impacts of these.

NGT directed MoEFCC and the Himachal state government to place the entire forest diversion proposal for the said project before the affected Gram Sabhas for their perusal. The judgement went on to conclude that, “the Gram Sabha shall consider all community and individual claims” in the process bringing under it the cultural, religious, environmental and livelihood impacts as a result of the loss of forests and water sources.

This visual journey through Lippa, one of the main affected villages helps put the NGT’s judgment in perspective.

Lippa, also referred to as Chhota Shimla, is tucked away in a high mountain valley in Kinnaur. A bridge greets you at the entrance of the Lippa village. Underneath flows the roaring Kerang khadd (stream), a perennial snowfed river that makes its way through steep slopes into the mighty Satluj. It is this river that will be diverted from its original route through a tunnel and dropped into another river called Kashang to generate 130 MW of power. It is the lifeline to the people of Lippa village. 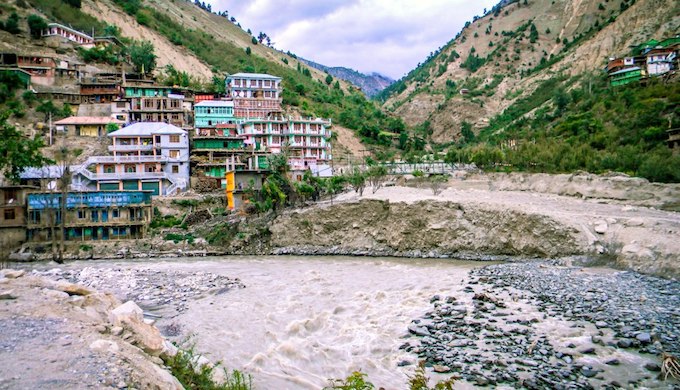 The Kerang stream (right) meeting the Pajer stream (left). At the base of the Lippa village, another stream, Pajer joins the Kerang. “If it was not for the Kerang holding down the Pajer and washing off the silt brought by it, Lippa would have been buried under debris by now,” says S. S. Negi, a resident. The failure of the EIA reports of the project to assess the sediment load of Pajer and emphasise the role of Kerang for the survival of the village is an oversight that leads to the resistance to the project. (Photo by Sumit Mahar)

The bridge over Pajer stream. (Photo by Manshi Asher)

The bridge over Pajer stream was washed away in the devastation of 2014. (Photo by Prakash Bhandari )

S.S. Negi, former Vice Chancellor at Dr Y S Parmar University of Horticulture and Forestry in Solan, deposes to the panel at the Satluj Basic Cumulative Impact Assessment Report Consultation. In fact, most residents of this Buddhist village narrate with pride stories of their ecological and cultural heritage which defines their very existence. These include the stories of the Buddhist monks who visit the Padmasambhava temple, located just along the proposed tunnel for the Kashang project. There are also two high altitude lakes along the ridge, where the monks go to pray for rains in times of long dry spells. (Photo by Sumit Mahar)

The traditional devta puja at Lippa Village. In December men and women, old and young, are seen with necklaces of dried pine nuts, locally known as chilgoza, a species endemic to the area which is now under threat. Close to 530 chilgoza trees will be felled in the 0.63 sq km of forest to be cleared for the Kashang project. According to Devi Gyan from Lippa village, 10,600 kg of chilgozas are collected and sold at INR 450 (USD 6.75) per kg; some years they sell for as much as INR 1,000 (USD 15) per kg. (Photo by Manshi Asher)

The Chilgoza harvest. The peculiar terrain provides very limited scope for construction as well as farming, and yet the people of the region have worked hard to carve out terraces on steep slopes and riverside to support the thriving apple and horticulture-based economy. The diversion tunnel for Kerang with 4 access tunnels for the project will be constructed upstream of Lippa at a place called Lappo. There are close to 150 natural water springs in Lappo where a majority of families from Lippa village have agricultural land and apple orchards. The springs are the main source of irrigation. Evidence from existing projects like the 1,200 MW Karchham Wangtoo, indicates that underground tunnelling may disturb the hydrological processes and lead to the drying up of chashmas, or springs. (Photo by Sumit Mahar)

Terraced orchards around the village. The Kashang project is just one of many in Kinnaur which has led to the landscape being torn apart, sliding, cracking and quaking every other day. Little wonder that the people of the region welcomed the National Green Tribunal’s judgment. (Photo by Prakash Bhandari)

By Arun Sharma
As India slowly reopens its economy, care must be taken so that increasing particulate matter pollution does not contribute to the spread of the Covid-19 pandemic
END_OF_DOCUMENT_TOKEN_TO_BE_REPLACED

Focus back on millions displaced by climate disasters

By Joydeep Gupta
The morning after the strongest cyclone ever to hit West Bengal shows tremendous destruction. There is still no news from much of Sundarbans
END_OF_DOCUMENT_TOKEN_TO_BE_REPLACED

By Joydeep Gupta,  Zobaidur Rahman Soeb
In West Bengal, evacuees and people quarantined for possible coronavirus infections are crammed inside the same buildings because there are no other shelters
END_OF_DOCUMENT_TOKEN_TO_BE_REPLACED

By Sharada Balasubramanian, Jency Samuel
Fisheries markets collapsed in the first days of the lockdown, impoverishing hundreds of thousands of small fishers in India, and recovery is nowhere in sight
END_OF_DOCUMENT_TOKEN_TO_BE_REPLACED

By Richa Singh
India’s second longest river is flowing clean in the lockdown forced by Covid-19. A grim reminder of how it was before could persuade us to keep it that way
END_OF_DOCUMENT_TOKEN_TO_BE_REPLACED

By Christopher Trisos, Alex Pigot
Rather than slowly sliding down a climate change slope, many ecosystems many fall off a cliff edge, negatively impacting the mostly poor people who depend on them
END_OF_DOCUMENT_TOKEN_TO_BE_REPLACED