Despite operating a climate-friendly sewage disposal system, Kolkata is struggling to implement a project to sustainably manage solid waste in the metropolis 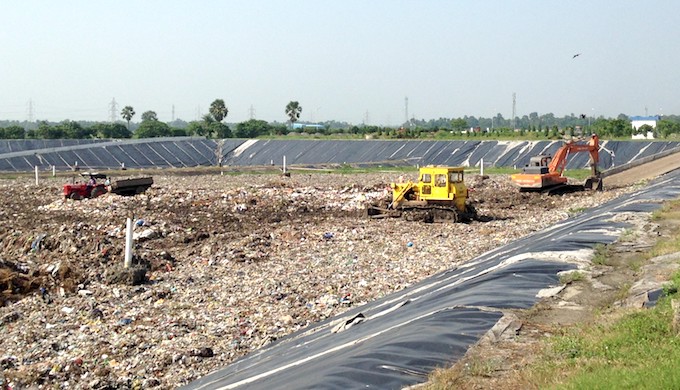 A waste management centre at Baidyabati municipality near Kolkata

Kolkata is often lauded for its unique sewage disposal through the wetlands on its eastern fringes, but the experience to institute a low-carbon solid waste management system in the city has been mixed at best.

The Kolkata Solid Waste Management Improvement Project (KSWMIP), an INR 1.7 billion (USD 250 million) programme that was started in 2007 to install a number of integrated waste disposal sites in municipalities scattered around the core metropolitan area, has seen slow progress because of a top-down approach and poor implementation, critics say.

The project, conceptualised and funded by the Japan International Cooperation Agency (JICA) and implemented jointly with the government of India, has been shortlisted for the prestigious C40 Cities Awards to be announced on December 1 in Mexico City although much work remains to be done on the ground.

In India, few municipalities have the money to handle garbage; the situation is often worse in the towns that encircle megacities. It is no less true in Kolkata, which has expanded quickly to absorb dozens of small towns whose municipalities are ill-equipped to manage the rapidly growing garbage volume.

The JICA-sponsored project aimed to build scientifically managed municipal solid waste (MSW) systems in six small towns around Kolkata on the west bank of the Ganga — Baidyabati, Konnagar, Uttarpara Kotrung, Champdany, Rishra and Serampore. Home to more than a million people, they were part of an experiment that sought a cost-effective solution to municipal waste management over a 16-year period. One of these municipalities traces its founding to 1846; still, about 90% of the garbage is just thrown into open dumps and landfills, a study found in 2011.

The project has two components: engineering packages targeted towards design, procurement, construction and implementation of waste management infrastructure in the six municipalities using Japanese technology; and affecting behavioural change at the family level in waste disposal.

The physical infrastructure is almost in place. “Compost plants were handed over to the Uttarpara Kotrung and Baidyabati municipalities in October-November last year and to Champdani Municipality in October this year,” Satinath Jana, KMDA Executive Engineer, Planning, and the nodal officer for the project, told indiaclimatedialogue.net. “By February 2017, we shall hand over the remaining compost plants. The RWMC, which is supposed to receive the collective inert waste, is already fully prepared and functioning, and the other infrastructure such as secondary transport points, transfer stations are all in place. The RWMC will also subsequently be handed over to the municipalities.”

Once the infrastructure is handed over to the municipalities, they will have to generate resources to operate the entire waste management system. At present, the cost of running the RWMC is INR 1.4 million every month, including a profit to the contractor operating it now, according to institutional sources running the plant.

The project with an emphasis on cost-effectiveness and climate impact mitigation took quite long to get off the ground due to several reasons. The first was technology transfer. The project was designed keeping Japanese conditions in mind by engineering firm Yachiyo, lead partner of Yachiyo Senes Consultants Consortium, which was the project management consultant.

Amit Dutta, who teaches civil engineering at Jadavpur University and was part of the Senes India team, redesigned the waste management centre and some other elements of infrastructure. “Yachiyo’s technology did not accommodate Indian weather conditions and bacteriological issues. Also, its cost of implementation would have been higher. After it was redesigned, the Japanese accepted the modifications and we went ahead with the actual construction of the infrastructure,” he told indiaclimatedialogue.net

Joint involvement of citizens and municipalities in low-cost solid waste management was pioneered in 2002 by urban ecologist Dhrubajyoti Ghosh when he was Chief Environment Officer of the Government of West Bengal.  A citizen-administration partnership in upgrading solid waste management practice was initiated in Kanchrapara Municipality. The project continued for two years, by which time composting and marketing of compost, recycling of non-biodegradable waste, functional ward-level solid waste management (SWM) committees and a monitoring schedule to collect information on the functioning of the collection system that was put in place had all been completed.

“The hallmark of the success of this project was the absence of any project consultant, which invariably drives up project costs in initiatives elsewhere. The fundamental point here was the presence of local political will, and that is why things progressed rapidly, so much that we could determine composition of the waste generated by the municipality in a very short time,” Ghosh told indiaclimatedialogue.net.

Unfortunately, this successful bottom-up initiative was limited to one municipality. In contrast, JICA’s is a top-down approach, and has taken a lot of time to ensure buy-in and ownership of the local municipal bodies.

In case of KSWMIP, lack of political will and ownership at the level of the municipality were important hurdles. The citizens were sceptical whether the project could take off smoothly, or be sustained. Neither were the municipal authorities sure of how finances would be generated for maintenance once the infrastructure was put in place and handed over to them by the KMDA.

Senes Consultants as part of their activities put in place an intensive interaction exercise through the social mobilisation team and developed a full set of behavioural change communication materials to be disseminated among the citizens, especially about the need to segregate waste at home.

This started in 2008 and has utilised every social opportunity available to take its communication to the people. This is the most demanding part of the project, and is continuing.

However, internal conflicts at the municipalities often created problems and many of the programmes had to be cancelled, according to a report by a project consultant.

Ranjit Mukherjee, Deputy Project Manager, Social, told indiaclimatedialogue.net, “It has been found that in small towns, 82% of MSW (municipal solid waste) is generated at the family level so that aspect of mobilisation was vital. Overall, the environmental education was targeted to encourage all involved to become stakeholders rather than beneficiaries of the project.” In the project area, 193,969 families were targeted, and 100% penetration has been achieved in terms of communication, he claimed.

To allay misgivings of the municipal authorities regarding finance, infrastructure, social mobilisation and the crucial issue of attaining self-sufficiency after the project period was over, JICA engaged the services of Delhi-based consultants IPE Global, which prepared an operation and maintenance plan in 2015. “There seemed to be a level of demotivation in the municipalities because of a mismatch between the infrastructure that was in place at the time we took over and the waste disposal activities that were taking place, chiefly segregation and transfer to landfill site,” said Anil Bansal, Team Leader and Director, Urban Infrastructure & Engineering, IPE Global. “But we found that there was much possibility of the project successfully running due to financial options available, high quality of organic waste being segregated and also because of the social mobilisation work being done, and we impressed as much on the municipalities.”

Subsequently, it has been agreed that the municipalities will approach the Department of Municipal Affairs of the government of West Bengal for additional financial support. The effect of this on garbage disposal remains to be seen.