Walls can’t keep out the sea in Kerala

Even as storms become more intense due to climate change, walls along Kerala’s vulnerable shore are insufficient to protect the thickly populated coastal areas 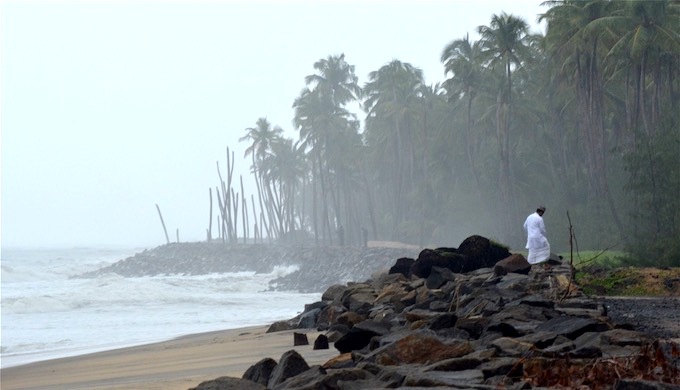 A sea wall at Chettuva (Image by S. Gopikrishna Warrier)

The coast of Kerala, where rain-laden clouds of the southwest monsoon make landfall, is losing its natural edge. Granite blocks and concrete walls now bind much of the sandy beaches, where generations of children played at the edge of the water.

With significant coastal erosion and high population density, artificial structures continue to be constructed along the coast in Kerala with the stated objectives of protecting lives and property. According to the shoreline change statistics prepared by NCSCM for the country, though Gujarat has the longest eroding coastline (928.4 km out of 2,021.3 km), artificial coasts have been built only over 6.9 km. Even in West Bengal, which has 78.5% of its coast under erosion, artificial structures have been constructed only along 12.1 km.

However, the effectiveness of such walls and similar structures to deal with the adverse impacts of climate change is limited when compared with natural protection such as mangroves and sand dunes. Even while the artificial structures are increasing along the coast, the naturally protective systems are facing increasing pressures to their existence.

Kerala’s coast is vulnerable to sea level rise of 1.75 mm per year, according to estimates by the National Institute of Oceanography. The impact of sea level rise in some parts of Kerala can be significant because of the inundation of the estuarine network along the coast, for instance, in and around the commercial city of Kochi.

The estuarine mouth areas are also highly prone to erosion. Kollam and Ernakulam are the districts with the highest length of artificial coast at 79.92% and 79.74% respectively. These are districts with large backwater systems – Vembanad and Ashtamudi.

“In addition to the sea level rise, it is the increasing intensity of the storm surges that is going to be important for the Indian coast,” R. Ramesh, director of NCSCM, told indiaclimatedialogue.net. “The surge is going to happen whether it is a natural or an artificial coast. Sea walls are not considered a very effective long-term solution for this. At best they are immediate protection measure, and in many places their construction has not been done scientifically. As a result, at times the boulders erode along with the coast.”

The answer, according to Ramesh, is to conserve and protect the natural protection systems such as mangroves, sand dunes, mud flats, sea grass beds and coral reefs. NCSCM has mapped the ecologically sensitive areas all along the country’s coasts and submitted to state and national governments for incorporation into the coastal zone management plans as areas that should not be infringed for development.

“Both during the Odisha Super Cyclone of 1999 and the Asian Tsunami of 2004, mangroves have proved to have protected lives and property,” V. Selvam, coastal ecologist and executive director of the M.S. Swaminathan Research Foundation (MSSRF), told indiaclimatedialogue.net. “During the super cyclone, wind speeds reached above 250 km per hour. The damage to life and property reported in villages behind mangroves were less than those villages that did not have any mangroves.”

In a communication published in Science journal, Selvam and other international researchers showed how villages protected by mangroves and other coastal vegetation in Tamil Nadu survived the impact of the 2004 tsunami better than those that did not have the same protection.

According to Selvam, mangroves also provide protection against sea level rise because the soil platform under the mangroves plants continues to rise in height. The leaves from the mangrove plants fall into silt trapped from the water, and together the platform continues to rise. This can keep pace with the projected sea level rise and prevent inundation.

However, a detailed understanding of how the impacts of climate change will impact the Indian coasts is still emerging. Recently, NCSCM completed an exercise for the Ministry of Environment, Forests and Climate Change to map the climate change vulnerability along the coast and also the high tide line. This project was done in partnership with the Survey of India.

“We wanted to identify the areas that are vulnerable if there is a storm surge or a cyclone,” Ramesh said. “We worked out a methodology to find out how much of inundation can happen if there is a surge, say 1 metre or 0.5 metre. The increase in the water level could be due to surges or due to sea level rise. It is important for the governments to identify the low-lying areas and have an action plan on how to protect them in the future.”

The idea was to mark out a hazard line for the coast. There were two components for this. One was the flood line — till what point the sea could come if there was a flood. The second was to understand the erosion along the coast. For both, it was necessary to have precise information about the elevation profile along the coast. Low-level aerial photography provided high-resolution data. Erosion mapping was done on top of this mapping.

For the erosion-accretion maps across the country, NCSCM used colour codes so that policymakers could identify in which stretches of the coast the sediments were being washed away or being built up at a low, medium or high rate. The maps also identified the stretches that have artificial structures along them.

“Coasts have a natural dynamic, with erosion and accretion happening at the same place,” Ramesh observed. In summer months, accretion happens because the low energy waves deposit sediments. During the monsoon period storm waves take out these sediments. Sea walls and hard structures usually move erosion to down-drift areas.”

In this process of mapping, the high tide line was also mapped along the country’s coast, so that it could be used as baseline for future coastal zone planning and management. The maps have been handed over the national and the state governments in the coastal states for ground validation and subsequent notification.

The Kerala government has tasked the Thiruvananthapuram-based National Centre for Earth Science Studies to fine-tune these maps along with local-level information inputs, according to an official source. The government is of the opinion that blending local understanding about the coasts will help in effective zoning and management.

At the local level, the sea walls are considered both an asset and a liability. For instance, in Chettuva village of Thrissur district, there is a long sea wall along the coast. P.K. Basheer, member of the Kadappuram Panchayat, remembers that during his childhood, the sea was further away from where it currently is.

Though the sea wall has helped prevented the sea from coming in further, it breaches often and does not provide a permanent solution. On the other hand, while the tidal currents have been taking away sand from the beach, it has been building a sand bank along the mouth of the Chettuva river, endangering the fishing boats as they come into the harbour.

Ravi Panakkal, an environment activist, finds the sea wall an obstruction to the conservation of turtles along the coast. “Even though much public money is spent to construct this wall, it does not offer protection against storm surges, as the sea has been dislodging the stones at many locations,” he told indiaclimatedialogue.net. His group has been working to protect a patch of mangrove forests upstream in the Chettuva river’s estuary from being encroached upon.

K. Venu, a local journalist at Chavakkad, says the sea walls have been failing because they are constructed hastily, have faulty designs and are sited at wrongly identified locations.

Ramesh of NCSCM feels that a “sediment cell approach” has to be taken to understand the erosion-accretion dynamics along the coast. Sediments cells are that part of the sea that is enclosed by two headlands (the part of the land jutting into the sea). The flow of sediments happens only within a sediment cell, so thus once the dynamics of this movement is understood then siting and designing interventions such as artificial structures, if required, becomes more scientific.

“We have identified 27 primary sediment cells and 54 sub cells for the entire length of the Indian coastline,” said Ramesh. “We would like to use this as a boundary for the integrated coastal zone management (ICZM) plans.”

It may not be possible for Kerala to abandon the sea walls already built. However, with a holistic and scientific approach, further hardening of the coast with sea walls can be prevented. This will help Kerala’s coast to find its own natural resilience to climate change and eroding seas.