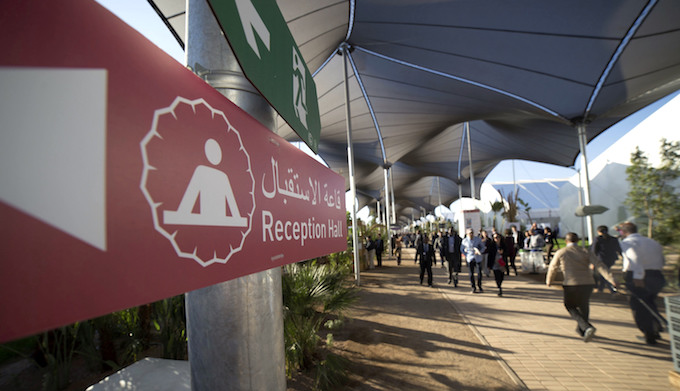 The world climate summit is being held in Marrakech, Morocco. (Photo by International Renewable Energy Agency)

As Donald Trump – who has been in persistent denial of the reality of climate change – was elected to become the next President of the United States, representatives of over 190 countries gathered in Marrakech, Morocco, for the November 7-18 UN climate summit struggled to adjust to the new reality.

Members of the US government delegation repeatedly insisted that they had not heard from the President-Elect, and they would continue to go by the instructions given by the outgoing Obama administration. One delegate said that in the matter of greening the economy, Barack Obama had moved the US “over the hilltop” and now the process had a “natural momentum”.

However, in the numerous rooms where different aspects of international agreements are negotiated, there was a small but perceptible hardening of the American stance that industrialised countries need not do so much and developing countries should do more to combat climate change.

If taken further, such a stance can seriously harm the Paris Climate Agreement even if Trump does not carry out his threat to withdraw the US from the agreement altogether. See: Trump presidency may spell disaster for climate

It is already harming the plan to implement the agreement. Led by the US, industrialised countries are consistently quibbling with developing countries on how much money they have paid and how much they should pay for the move towards a greener economy.

In the Marrakech summit, the latest arena for this disagreement is finance to help poor nations adapt to climate change impacts. These countries are anyway unhappy that adaptation finance is unlikely to get more than USD 20 billion of the USD 100 billion per year promised by rich nations from 2020. And now rich nations are unwilling to even replenish USD 80 million in the Adaptation Fund, which has gone bankrupt after financing some promising projects.

The reluctance of rich nations to do more to reduce greenhouse gas (GHG) emissions before 2020, when the Paris Agreement comes into effect, remains the other big problem area. Coupled with this is the unhappiness of poor nations about the money they are getting now – rich nations say climate finance is now crossing USD 62 billion a year, a figure hotly contested by developing countries. The refusal of rich nations to enable cheap transfer of green technologies remains another contentious area.

In fact, action before 2020 is now largely out of the formal negotiations under the UN Framework Convention on Climate Change (UNFCCC).

When developing countries complained about this, summit host Morocco came up with the idea of holding an informal “facilitative dialogue” on pre-2020 action. The first day of the dialogue showcased a number of green projects, with delegates discussing the problems and prospects of implementing them in developing countries. The dialogue will be resumed on November 16, hopefully with a plan of action between now and 2020 that will actually be implemented.

The Intergovernmental Panel on Climate Change has said global warming is reducing farm output worldwide; making droughts, floods and storms more frequent and more intense; and raising the sea level. The loss and damage are hitting all countries, and are of particular concern to the poorest among them. But industrialised countries continue to try their best to hobble any agreement on loss and damage. The US is particularly afraid of compensation lawsuits, and has got all mention of liability removed from the Paris Agreement.

During the first week of this summit, developing countries have been trying to establish an international task force to deal with the issue of people being displaced due to climate change effects. They are also pushing for a clearing house on risk transfer by insurance firms. Overall, they want the loss and damage mechanism strengthened with some money so that it can come up with a five-year work plan. Rich nations are opposing each move, and the issue is likely to go to ministers during the last days of this summit – in the hope that they can come up with a political solution.

All this is coming as a damp squib at the end of a year during which the International Civil Aviation Organisation finally came up with a plan to control GHG emissions; the Montreal Protocol was amended to include refrigerants that are powerful polluters; and the Paris Agreement came into force in a record time for international treaties.

At the end of the first week during the Marrakech summit, officials in the UNFCCC secretariat were trying to put the best possible face on the situation by saying negotiations are not really important during this summit anyway; instead, the world should focus on the actions being taken on the ground by various government agencies, private firms, NGOs and individuals to combat climate change in various ways.

There have been many admirable activities, but together they still fail to keep the world on the path of holding average temperature rise within two degrees Celsius by the end of the century. To do that, governments – mainly from industrialised countries – have to enhance their Nationally Determined Contributions (NDCs) that together form the heart of the Paris Agreement. Enhancing NDC ambition is the elephant in the room that no one is talking about yet.

By India Climate Dialogue
Six experts outline what Britain needs to do as it hosts the UN climate summit in 2020, a crucial year
END_OF_DOCUMENT_TOKEN_TO_BE_REPLACED

By Joydeep Gupta
It’ll take a global system change if this wish of former UK energy minister Claire O’Neill, who will head the next United Nations climate summit in Glasgow, were to come true
END_OF_DOCUMENT_TOKEN_TO_BE_REPLACED

By Joydeep Gupta
The annual summit failed to make headway as there was a breakdown in discussions over finance, carbon markets or how to deal with loss and damage caused by climate change
END_OF_DOCUMENT_TOKEN_TO_BE_REPLACED

By Soumya Sarkar, Joydeep Gupta
Lives of more than 1.4 billion people living in mountains, coasts and islands are in jeopardy due to an accelerated rise in sea levels and faster melting of the planet’s ice cover
END_OF_DOCUMENT_TOKEN_TO_BE_REPLACED

By Joydeep Gupta
The annual summit failed to make headway as there was a breakdown in discussions over finance, carbon markets or how to deal with loss and damage caused by climate change
END_OF_DOCUMENT_TOKEN_TO_BE_REPLACED