US seeks to allay fears over climate action

The US will continue to take action on climate change, its chief negotiator said, even as developing nations struggled to get their concerns addressed in the draft ‘Marrakech Call for Action’ 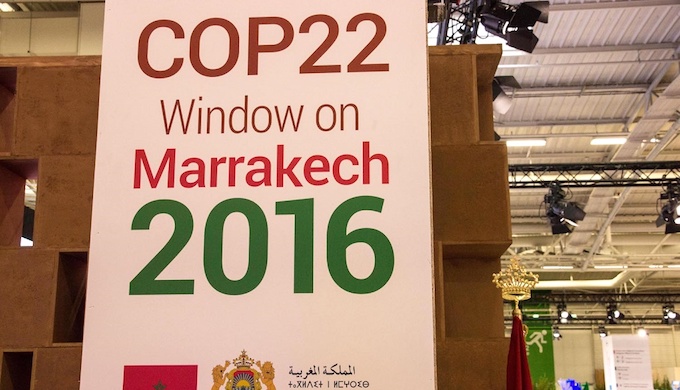 Negotiations are going on at the climate summit in Marrakech, Morocco. (Photo by Climate Action Org)

“Heads of state can and will change, but we can and we will sustain a durable effort to conquer climate change,” says Jonathan Pershing, chief climate negotiator of the US government.

At the United Nations climate summit in Marrakech, Morocco, the outgoing Barack Obama administration of the US is rushing to make commitments to combat climate change in such a way that the new team of President-Elect Donald Trump finds it difficult to break the promises.

Developing countries, meanwhile, are struggling to secure finance, especially for projects that help them adapt to climate change impacts, and to get their concerns reflected in the “Marrakech Call for Action” that may be adopted by the end of the November 7-18 summit.

Speaking in public for the first time since Trump was elected US President, Pershing said at a media briefing: “President Obama and the administration have made climate a top priority, made strides to cut carbon, build resilience, lead international efforts… This reflects the global call for climate action. We are moving away from negotiation towards implementation” of the Paris Agreement.

“Soon we’ll see a transition to a new president. At this time, I do not have information about the transition team or when the process will start. I cannot speak for the President-Elect’s team,” Pershing said, adding that all countries were now “deeply invested in climate action. It is no longer a question of whether to accelerate implementation but when and how.”

During his campaign, Trump had threatened to pull the US out of the Paris Agreement. Pershing said the agreement took care of “economic growth and environment; it is flexible, durable, inclusive, and ambitious.”

Talking about the momentum already gathered towards moving to a greener economy, Pershing said, “Markets are moving, countries are following. Renewable prices are falling. Banks and finance agencies are allowing private finance to move to meet demand for low-carbon solutions.”

Asked about the effect of Trump’s pronouncements on the US maintaining a seat at the table on issues that go far beyond climate, Pershing said, “Climate is deeply tied in a broad way to issues of sustainable development. There will be consequences (of climate change) to our economies; increased likelihood of flooding, super storms. It is not so much the individual institution, but a question of the damages we’re trying to avoid. Economic, business, civil society, subnational groups will move in this direction” to tackle climate change.

Pershing was asked about the consequences if the US withdrew its climate finance to developing countries. Industrialised countries have committed to provide USD 100 billion a year for this purpose from 2020.

“The US has historically managed to pay, even during Bush administration. My personal view is that we’ll continue to meet commitments,” Pershing said. “Even more important is the need to leverage private finance. The US commitment to the Green Climate Fund is only USD 3 billion, so that may not matter so much. The problem is that leverage (of private finance) in the system is much smaller than what we think we can achieve.”

What are the other countries telling the US delegation in Marrakech? Asked about this, Pershing said, “China intends to move forward. Doesn’t surprise me, frankly. The Paris Agreement is flexible and in nations’ interests. I’m hearing same from the EU (European Union), Brazil, Mexico, Colombia, Costa Rica.”

Pershing invited the media in two days to hear more about the US goal to move towards a greener economy by 2050. A few hours before his briefing, the US delegation mailed to journalists a long list of climate finance initiatives it has been carrying out with other countries and made fresh commitments.

In essence, it said that between 2010 and 2015, the US invested in more than USD 11 billion in international clean energy finance, including grant-based assistance, development finance and export credit. Fresh commitments include USD 125 million for renewable energy projects in India and El Salvador and launching a partnership with the philanthropic sector to bring more efficient appliances to Indian villages.

The projects in India include USD 75 million for a utility-scale solar photovoltaic project in Telangana sponsored by ReNew Power Ventures. It is part of mobilising financing under a USD 250 million facility to support up to 400 MW of new solar power projects in India across states.

The US-based Rockefeller Foundation’s Smart Power for Rural Development Initiative has announced a new partnership to accelerate the deployment and use of energy efficient off-grid devices in rural India.

The mail from the US delegation said that its Department of State will, subject to Congressional notification, provide funding for Global LEAP to support the development and roll out of a programme to deploy energy-efficient devices such as televisions, fans, and refrigerators at selected Smart Power supported mini-grid sites.

It also promised to develop a strategy to reduce energy costs for some of the poorest people in India. When deployed it is expected to reduce energy consumption by over 50% for rural households, increase revenue for mini-grid operators by over 300% per household, and generate rural employment for people involved in distribution and supply chain management of the devices.

A Memorandum of Understanding has been signed to develop quality and energy performance standards for off-grid appliances in Bangladesh, a global first.

Other countries, other worries

While the Marrakech summit remained transfixed by the Trump effect, delegates from developing countries had other problems. Industrialised countries have now effectively said they cannot put in any money into the bankrupt Adaptation Fund. Poorest nations have carried out a number of projects to adapt to climate change effects with money from this fund. Now they will have only the Green Climate Fund to go to, and many governments find its project evaluation process very cumbersome.

The draft “Marrakech Call for Action”, which the host government would like to be the main declaration at the end of this summit, has also raised concerns. The draft pushes all tough decisions to 2017 and 2018 and talks almost exclusively about mitigation of GHG emissions, which is troubling for developing nations. It is almost silent about adaptation to the effects of climate change, finance and cheap technology transfer to poor nations, issues that are vital to their interests. It also says little about action between now and 2020 to combat climate change.

Over the next few days, long hours of tortuous negotiations are in store.

By Joydeep Gupta
India is meeting its current unambitious pledge, but it is still pushing coal and failing to protect natural resources needed to protect people from the worst impacts of climate change
END_OF_DOCUMENT_TOKEN_TO_BE_REPLACED

By Lou del Bello
Developed countries are taking action to reduce their own carbon emissions, but they are not coughing up enough money to help vulnerable poorer countries do the same
END_OF_DOCUMENT_TOKEN_TO_BE_REPLACED

By Joydeep Gupta
US president-elect Joe Biden has strong popular backing to deliver action on climate change, which could provide impetus for countries worldwide to follow suit
END_OF_DOCUMENT_TOKEN_TO_BE_REPLACED

By Soumya Sarkar
The planet is losing biodiversity at an unprecedented rate, posing grave danger to human health and prosperity, the UN Convention on Biological Diversity warned in its flagship report
END_OF_DOCUMENT_TOKEN_TO_BE_REPLACED

By Olive Heffernan
With a range of marine geoengineering field trials moving forward, attention is turning to how research and eventual deployment should be governed globally
END_OF_DOCUMENT_TOKEN_TO_BE_REPLACED