Hassan Bhai stretches his sinewy, sun-tanned, fisherman’s arm’s across a large swath of the Gulf of Kachchh and proudly shows the mangrove plantation that people from his village, Luni, nurture. Dots of green bob up and down the waterline in high tide over a stretch seven kilometres along the coast.

Hassan says the fishers love the mangroves, as fish grow, spawn and breed in them. They also protect the coast from storm surges, especially cyclones. An industry giant, the Gautam Adani group, that owns a port, power plant and a special economic zone in the nearby coastal town of Mundra, bankrolls mangrove regeneration — even though the move follows destruction of huge tracts.

Hassan often finds himself hiring villagers on daily wages to plant mangroves, chasing away Kharai camels, a Kachchhi breed that graze on mangroves, and arguing with Rabari nomadic pastoralists who bring them.

There is a buzz about mangroves in Kachchh amidst regeneration efforts and conflicts of interest. Still the buzz hides the real magic of mangroves in a warming globe. Mangroves are nature’s best carbon sinks. They soak up and store excess carbon dioxide that blankets and warms up the globe.

Kachchh is the second largest mangrove habitat in the country, after the Sundarbans. It is perhaps on of the most difficult coasts for mangroves to grow because of extreme heat and salinity. Kachchh has also witnessed the most rapid destruction and fragmentation of mangroves due to industries, ports and mines, followed by rapid mangrove regeneration in recent times.

The local communities often work at cross-purposes. Nomadic pastoralists, especially Rabari camel herders are selling their herds, and migrating over long distances in search of fodder. They are still unwelcome in plantations and protected forest areas. They insist that grazing is good for mature forests, as it leads to trimming of old branches and promotion of new growth. Still planters are sceptical as a mature camel can eat 30-40 kg of fodder a day, a burden on young plantations.

Hassan and colleagues protect the plantations as they are more than a means for daily wages. They bring back memories of old Kachchh, when the coast had lush natural mangroves.

A new generation of ports, especially, have destroyed mangroves amidst building, maintaining and dredging operations and vessel movement on the creeks. Unsustainable grazing, timber and fuel wood harvest, erosion of shoreline, industrial impact, and grazing have been identified as pressures on mangrove ecosystems. 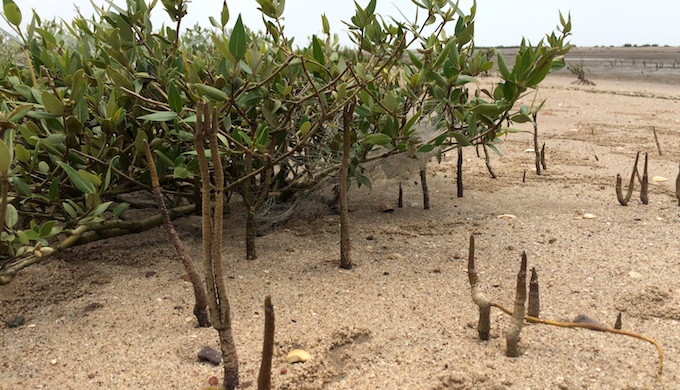 As if in penance – in reality, due to Ministry of Environment norms – the industries and the state government agencies have been on a drive to plant more mangroves in recent years. That is what has made Gujarat the state with the biggest net gain in mangrove afforestation, notching up an increase of 676 square km since 1987, though the net gain is roughly a tenth, considering the level of deforestation. Still the state has a total of 1,103 square km, most of it in Kachchh, making it the second biggest home of mangroves in India after West Bengal.

Now Gujarat Ecology Commission (GEC), a government agency that coordinates regeneration efforts, is upbeat about its success. About 30% of the regeneration efforts in Gujarat have used the community-based model, as studies suggest. Lomesh Brahmbhatt, a GEC field manager who manages plantation efforts, says the group is trying hard to win the trust of villagers. “People used to run away when our vehicles entered their villages,” he told indiaclimatedialogue.net. “They thought it was Forest Department personnel coming to evict them. Then we gradually gained their trust and they welcomed us.”

Although the GEC model works, there are still challenges, experts note in a series of studies. Industry regeneration efforts tend to see local people just as daily labourers. Without ownership and long-term involvement, mangrove forests die and a large share of new plantations are failures.

Besides, mangrove destruction continues as industries expand, and plantations can never replace natural forests. In Kachchh especially, heat and high levels of salinity make mangrove growth painfully slow, with a low survival rate. Last but not the least, areas under the Forest Department and industry-sponsored plantations are largely off bounds for traditional communities.

These reasons lead to low levels of people’s real participation in regeneration efforts.

Nevertheless mangroves are the lifeline of coastal fisherfolk, cattle, camels, fish and assorted marine life. “The missing bit is the carbon sequestration, though studies in Gujarat have shown the potential,” G.A. Thivakaran, chief principal scientist of coastal and marine ecology at the Gujarat Institute of Desert Ecology (GUIDE), Bhuj, told indiaclimatedialogue.net.

Mangroves guzzle more carbon dioxide that warms the earth than any other forest. That is besides their multiple roles in protecting the environment with a highly adaptable rich biodiversity. As Cambridge marine scientist Mark Spalding describes, mangroves are the most carbon-rich forests on earth.

Studies have shown that a typical mangrove has 182 tonnes of biomass above ground per hectare. Models show that mangroves host 1.6% of the total tropical forest biomass though they occupy only 0.6% of tropical forest area. In effect mangroves have more than double the biomass compared with other tropical forests. The more the green biomass, the more carbon it can absorb. The mangroves of Kachchh, however, are sparse, so the biomass density is lower than the average.

Besides, mangrove forests bury peat — layers of carbon-rich soil formed from decayed vegetation — and they do not normally emit methane as in the case of other peat forests because of the salinity. That is extra storage space for carbon.

The staple mangrove species of Kachchh, Avicennia marina, grows on the front line, where the high tide floods the plantation longer, and the salinity is higher. However, it is not easy to plant and nurture this species amidst constant tidal and wave movements.

One way to promote an interest could be ensuring long-term involvement of the local community in mangrove plantation projects, and ensuring short-term incentives in conserving plantations, as Thivakaran suggests.

Brahmbhatt gives the example of Asira Vandh, a village in Kachchh where people have planted and nurtured mangrove forests. The village is inhabited by Fakirani Jats, who have migrated long ago from Balochistan in today’s Pakistan. Women go every morning in tractor trailers to the nearby forest to cut mangroves, and feed their buffaloes. Camel grazing is restricted.

The village elders said the success is due to their community leadership and the trust they had in institutions such as GUIDE and GEC that promoted plantation work. These institutions on their part see a future for this model to promoted afforestation, especially under climate financing.

Hassan agrees that if villagers have a sense of ownership, mangroves can be conserved better. As he recommends, the corporates and other agencies need to trust people more and, of course, pay more for their work.