Green smudge on the Sahara

At the western edge of the desert that stretches from India to North Africa, an experimental Jatropha plantation shows promise 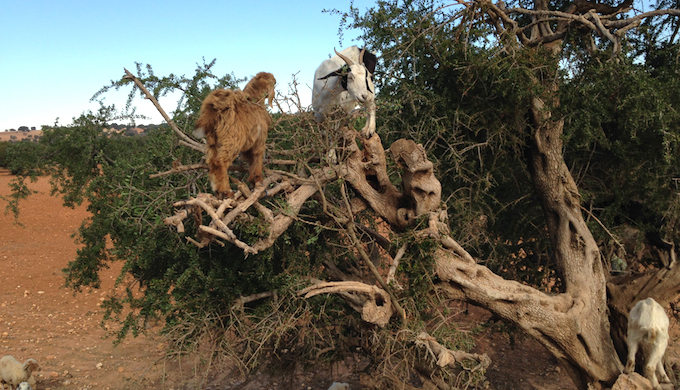 Goats browse on acacia leaves in the Tensift region of Morocco. (Photo by Joydeep Gupta)

Rajasthan? Northern Gujarat? No, the Tensift region of Morocco.

Similar scenes at the other end of the desert that stretches from India to the Atlantic, but with four big differences: the snow clad Atlas Mountains cutting short the southern horizon, occasional olive groves, occasional bushes from which is extracted Argan oil, arguably Morocco’s most famous export, and the Essaouira beach less than a two-hour drive away.

It’s that snow which has kept this semi-desert region around Marrakech from becoming a desert. But now with climate change, that snow cover has become more erratic, and the snow that does fall in winter melts earlier in the spring. It melts faster too, and the little rivers take the water down to the Atlantic in a rush, with damaging flash floods and a reduction in percolation underground.

Farmers with landholdings large and small have been doing the same thing as their counterparts worldwide, pumping up more and more water for irrigation. So close to the sea, even in this semi desert you could find water five metres underground. Not any more. The water table has fallen to 60 metres on the average.

Rich farmers have dug deeper. Smallholders have given up and are trying their best to move to cities or leave the country.

Enter Centre de Développement de la Région de Tensift (CDRT or Centre for the Development of Tensift Region). An NGO started in 1998, mostly by academics based in Marrakech, they have been restoring abandoned mines in the foothills of the Atlas Mountains, building check dams to hold back the snowmelt to some extent. And now – with a grant from the European Union – they are experimenting with a Jatropha plantation.

Hailed a few years ago as the oil-bearing plant that would be an alternative to petrol and diesel, Jatropha has fallen into controversy worldwide – largely because it threatened to replace food crops, but also because its fruit is toxic and there were accidents in places where the Brazil-origin plant had not been known before.

Jatropha plantation in the Tensift region of Morocco. Note the pipes for drip irrigation. (Photo by Joydeep Gupta)

Ahmed Chehbouni, CDRT President, tells indiaclimatedialogue.net that he is quite aware of the biofuel versus food crop debate, and the matter was discussed at length before the non-profit approached a local farmer with a request for a plot where they could experiment. One look at the plot makes it clear that nothing else would grow on the stony ground.

Chehbouni asserts that growing Jatropha is a good way to adapt to the main climate change impact in this region – more erratic availability of water.

What about the second risk? In India, Jatropha became notorious after three children walking home from school ate the fruit and died due to the toxicity. Chehbouni says he had not thought of this danger. Though this experimental plot is out of the way, now he will spread the word in the villages nearby.

So this is one place where Jatropha is fulfilling its original promise – growing on soil too poor for most other plants. Still, it does need some water, and CDRT has installed a pump. But it is careful about using only drip irrigation, channelling the water through covered pipes to avoid evaporation and then letting the water fall drop by drop, only at the spot where the main trunk of each plant sprouts from the ground. With such careful use, the scientists have needed to irrigate only twice before they have a bumper crop. It remains to be seen whether the average farmer can be as thrifty as the NGO – mostly academics and their student volunteers.

But before the Jatropha plantations can be scaled up to any level, CDRT has two problems to solve. Once there are lots of oil-bearing fruits, who will run the oil presses? And if they sort that out, who will they sell the oil to, and how?

Arched storefronts in the Tensift region of Morocco. (Photo by Renan William Candido)

To solve the first problem, CDRT has approached some of the many village-level women’s cooperatives in the area, which now mostly produce Argan oil – the all-in-one cooking oil, skin moisturiser and hair oil much prized around the world. The cooperatives are thinking about it. Chehbouni says they will deal with the second problem later, once there is enough oil to make commercial sales viable.

As tourists from Morocco, Europe and North America roar down the highway from Marrakech to Essaouira for a day on the beach and the souk, little do they know that some people are trying to do something good in the arid region they see only through tinted glass.