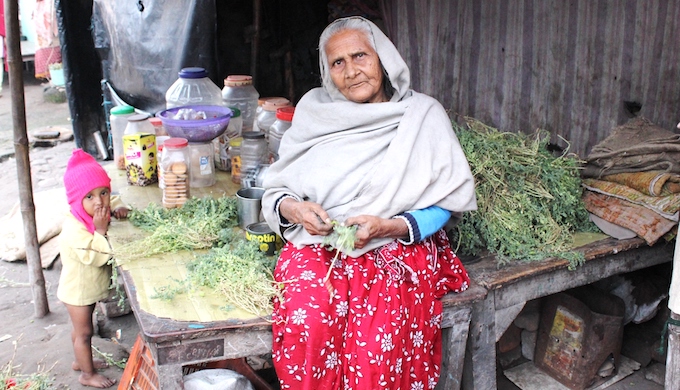 75-year-old Afsa Begum sells biscuits and fryums for kids who come to study in the madrasa housed in a crumbling 15th century mosque complex on the outskirts of Patna, Bihar, where she, her daughter-in-law and two-year-old granddaughter have squatted since years. Her husband is dead and her son left for Mangalore to work for a construction contractor after the severe monsoon floods in 2016. He has sent money only once. (Photo by Manipadma Jena)

Hafiza Khatun remembers one morning two years ago. Her husband had come running back from work in a state of distress. The embankment wall that kept the ocean at bay from their homes and fields in Cox’s Bazaar district in Bangladesh had breached again and seawater was flooding in. Crops could no longer be grown and homes and belongings had all been claimed by the marauding tides, as the sea kept rising due to climate change.

Hafiza’s husband, a manager in a betel leaf farm, was out of a job. After days of struggle when they had to sell most of their cattle to survive, her husband decided to leave for Malaysia for work with 20 other men from nearby villages who were to be smuggled by boat via Myanmar.

Left with three young children, Hafeza worked as a domestic servant in the one of the richer homes in the morning, and as a labourer in a betel leaf farm in the afternoon. While the older boy helped her, the younger two stayed in the house, unable to attend school. There was never enough food for the four of them. Illness set in, sometimes mild sometimes serious enough to keep Hafiza from work and the daily income they so desperately needed.

“The rights of migrants and their families are being threatened by unsafe migration, which is often driven by desperation and a lack of options caused by climate disasters. The impacts of migration on women, both those migrating and those left behind, is also not yet adequately understood or addressed by national or international policies,” Harjeet Singh, ActionAid’s Global Lead on Climate Change, told indiaclimatedialogue.net.

“Environmental migration is a gendered process, but discussions within public, policy, and academia regarding environmental migration are often gender-neutral, few studies making the link between migration, environment and gender,” said International Organisation for Migration (IOM) in 2014, flagging the gap when the Intergovernmental Panel on Climate Change (IPCC) in its Fifth Assessment Report said, “Climate change is projected to increase the displacement of people throughout this century.”

According to IOM, vulnerabilities, experiences, needs and priorities of environmental migrants vary according to women’s and men’s different roles, as do responsibilities, access to information, resources, education, physical security and employment opportunities.

The ActionAid report putting the issue in the current South Asian perspective says, “Young females from neighbouring Nepal and Bangladesh who migrate to India as well as internal migrants from rural areas moving to cities are increasingly vulnerable to abuse and trafficking. As they often use so-called ‘agents’ to help them find work, these can turn out to be traffickers, who once they arrive in the city, force them to work in brothels,” it cautions.

The 2016 Global Report on Trafficking in Persons by UN Office on Drugs and Crime (UNODC) released in December says women and girls make up 71% of human trafficking victims. Including for the first time a thematic chapter on connections between trafficking, migration and conflict, it underscores that trafficking in persons and migration flows resemble each other, increasing vulnerability of forced migration victims.

After repeated extreme or slow onset weather events have reduced a rural family to extreme poverty, the migration of younger women, usually daughters (even minors) increasingly appear as the best option for the entire family, finds an IOM study.

This is because the demand for labour in highly gendered but low-skilled niche jobs, such as domestic work, child and elderly care, is rising, as more and more educated women in South Asian cities are taking up careers outside home. Bangladeshi migrant women are seen increasingly in such jobs in Kolkata, Delhi and Mumbai. Together with garment and entertainment industries in India, this demand is acting as a powerful pull factor.

Even so, available figures show male migration is more common in the region. Millions of women like Hafiza Khatun, left behind at home, are facing an overwhelming burden.

Increasingly, research is documenting that the workload on women left behind is multiplied many- fold because the nature of migrant work being uncertain, remittance from migrant males is often sporadic. Agriculture remains critical for the family remaining at home to survive, finds an International Water Management Institute (IWMI) study.

Not only must the women do household work and child and elderly care, but also generate income usually by taking on their husbands’ role in agriculture. This too without access to capital or credit, while negotiating existing agricultural services dominated by men, where the women have to overcome several cultural barriers.

Women are thus reporting exhaustion, poverty and illness, and fields are being left uncultivated as they struggle to cope alone. In many areas these single women called drought widows or flood widows by their communities, report increased incidences of assault and violence. When disasters happen, such as the 2015 earthquake in Nepal, the lack of men in the village can put communities in further danger, the ActionAid report says.

The struggles of women environmental migrants have been documented but there is no statistical data to formulate effective policies. The crux of the problem is that while disaster-driven forced migration is likely to increase further, there is no systematic data and statistical record of internal and cross-border migration on which governments can base their policies.

A 2016 IWMI infograph says as many as 3.23 million migrants from Bangladesh are in India. India’s Minister for State for Home informed Parliament in November that 20 million illegal Bangladeshi immigrants, equivalent to Australia’s population, were in India. This is a volatile political issue; in 2004, Parliament was told the 2001 figure was 12 million. A recent report from The Economist quotes a former head of India’s Research and Analysis Wing (RAW) saying 15 million Bangladeshis are living in India. A 2016 IOM study, titled Migrant Smuggling Data and Research: A global review of the emerging evidence base, says 25,000 Bangladeshis are thought to enter India each year.

While there is no available age or sex-disaggregated data of irregular migrants to India from neighbouring countries, particularly Bangladesh and Nepal, estimates can be surmised from a UN High Commissioner for Refugees (UNHCR) 2015 study, which found that irregular migrants from Bangladesh, Pakistan, Sri Lanka and Nepal into Middle Eastern countries, such as Qatar, Bahrain, Oman, Libya, Kuwait, Saudi Arabia and the United Arab Emirates, are predominantly women. They work as housemaids.

UNODC South Asia Office said in 2012 that no systematic data on irregular migration is maintained in India either at the state or national level. But globally, there is better clarity on the gender dimension of migration. UN Department of Economic and Social Affairs (UNDESA) in 2015 estimated there were almost 244 million migrants in the world, approximately half of whom were women and girls. The International Labour Organisation (ILO) estimated in 2013 that out of 150 million international labour migrants 44% were women.

IOM’s 2016 Atlas of Environmental Migration, the latest and most exhaustive study on the subject, claims that in 2015, 19 million people were newly displaced due to climate disasters globally. This figure does not even include displacement from drought and slow onset environmental degradation. Overall, one billion out of the planet’s 7 billion people are presently on the move, either within countries or beyond borders.

The increasing participation of women of various skill levels in regional migration, whether forced or voluntary, driven in large part by socioeconomic factors underpins the greater gender sensitivity and attention that needs to go into laws, policies, programmes and even climate migration studies.

Aside from lack of concrete data and figure what is also obstructing South Asian governments from according the urgency that climate migration requires is that economic migration, also known as South-South migration, has been happening since long.

For a poor Bangladeshi who wants to better his income or escape poverty, irregular migration to India costs only USD 40 to USD 60 including the payment for the migrant smuggler, finds the IOM’s Migrant Smuggling Data and Research study.

“Migration has always taken place in South Asia, for long before climate change became an issue. Push factors include conflict, poverty, land access and ethnicity; while there are also many pull factors such as development, livelihoods, seasonal labour, kinship and access to health or services,” ActionAid’s Singh said. “Therefore, South Asian countries are slow to recognise the role of climate change as an additional push factor, and the extent to which it is driving migration. Climate change is thus still largely invisible in the migration discourse in South Asia.”

When forced migration triggered by extreme climate adds to the economic migration, clashes over resources and jobs, political seclusion and xenophobia would not be far off, as is seen in the on-going European crises. “There is need for clear definitions of climate migration and displacement which national governments should use, to gather and analyse data on the role of climate change in migration, and develop appropriate policies accordingly,” Singh said.

In South Asia as also in most countries now, disaster risk reduction and building resilience to climate-induced hazards is a key policy component to reduce distress migration. With high levels of poverty, low development indicators and large-scale dependence on agriculture in South Asia, building resilience within a timeframe will remain a major challenge. A challenge, which Hafiza Khatun will brave for many more years, for the sake of her three children.

As the boat reaches the jetty near Hariakhali village, Hafeza stands jostling with several other hopeful women, scouring the faces of the worn out, weather-beaten men who had been rescued from a Myanmar jail, caught while trying to land on its shores on a fishing boat without legal papers One by one, the men are reunited with wives and joyous children, excited to have their fathers back. After everyone had left, for Hafeza there was just the sound of the waves breaking on the shore.

By Soumya Sarkar, Xari Jalil, Abu Siddique, Ramesh Bhushal
Even as Covid-19 spreads like wildfire across South Asia, farmers are planting the summer crop despite grappling with higher input costs, labour issues and the threat of floods
END_OF_DOCUMENT_TOKEN_TO_BE_REPLACED

By Soumya Sarkar
Since India is the world's second-largest consumer of palm oil, it has a big effect on efforts to make the production and processing of the commodity sustainable
END_OF_DOCUMENT_TOKEN_TO_BE_REPLACED

By T.V. Padma
Algal blooms in the Arabian Sea that can be seen from space are being caused by the warming of snow-clad mountains in the Himalayas thousands of miles away
END_OF_DOCUMENT_TOKEN_TO_BE_REPLACED

Next pandemic inevitable unless we take urgent action

By Joydeep Gupta
Humanity’s broken relationship with nature is leading to new zoonotic diseases such as coronavirus emerging at an alarming rate, posing an acute threat to human life
END_OF_DOCUMENT_TOKEN_TO_BE_REPLACED

By Alison Kirsch, Wang Yiting
Chinese banks are still providing significant financing to coal projects, with most of the funding going to countries that come under China's belt and road initiative
END_OF_DOCUMENT_TOKEN_TO_BE_REPLACED

By Soumya Sarkar
The rapid warming of the Indian Ocean due to climate change is leading to more cyclones pummelling South Asia, as storms gather more quickly and become more intense
END_OF_DOCUMENT_TOKEN_TO_BE_REPLACED

By Soumya Sarkar
The locust swarms that destroyed farmlands in western and northern India are linked to the warming of the Indian Ocean. Such proliferation is more likely as rainfall patterns change
END_OF_DOCUMENT_TOKEN_TO_BE_REPLACED
Share This