Ganga an unholy mess at Kanpur

Even a short visit to Kanpur, an industrial city in northern India, is enough to show that there is no respite yet for the Ganga from massive pollution despite the much-trumpeted Namami Gange initiative, the Narendra Modi administration’s programme to clean up the holy river.

Despite a plethora of government schemes, initiatives and campaigns, and various court orders, untreated sewage and toxic industrial effluents continue to make their way into the Ganga. The fact that the river is worshipped and revered by millions has not helped the cause of keeping it clean.

There’s an overpowering stench at Dabka Ghat on the banks of the river in Jajmau area of Kanpur, which is compounded by the jarring sight of blackish-grey sludge of chemicals flowing into the river. The eerie silence from the slow moving sludge having replaced the gurgling of clear flowing water adds to the deplorable scenario.

At Dabka Ghat a drain regularly carries toxic chemicals from almost 100 tanneries that are located close to the Ganga and offloads them directly into the main channel of the river without any check, adding continuously to the already existing high water pollution.

“Fish often die in this stretch of the Ganga because of the water pollution. Biodiversity has been affected. Earlier we used to see peacocks here, but now they cannot be seen,” 19-year-old Sarvesh Kumar, a resident of Jajmau who often visits the riverbank at Dabka Ghat, told indiaclimatedialogue.net. “The water that we get for drinking has also become very saline and has turned light yellow.”

Kanpur, a city in Uttar Pradesh, is famous for its leather industry, with nearly 400 tanneries housed in the suburbs of Jajmau alone. The industry has become a bane for the Ganga as it contaminates it severely with a heavy load of toxic chemicals and heavy metals such as chromium, cadmium, lead, arsenic and cobalt, all of which have severe health implications.

A tannery unit at Jajmau (Image by Juhi Chaudhary)

The drain at Dabka Ghat is just one of the four main drains that carry toxic tannery wastewater from around 400 tanneries of Jajmau. Under the Ganga Action Plan (GAP) phase 1 in 1986 (the oldest Ganga clean-up scheme), these drains were connected to the four intermediate pumping stations (IPS) that pump water to a 36 MLD (million litres daily) common effluent treatment plant (CETP) at Wajidpur in the city. This CETP plant has a capacity to treat just 9 MLD of industrial wastewater and 27 MLD of sewage.

Due to a lack of vision, the infrastructure that was put in place in 1986 catered to just 175 tanneries in Kanpur and can currently treat a maximum of 9 MLD tannery effluents. But the number of tanneries has more than doubled since then. Currently, up to 50 MLD of toxic tannery wastewater is generated daily, according to Central Leather Research Institute (CLRI), out of which only 9 MLD can be treated. This implies that almost 40 MLD of industrial effluents does not even reach the IPS for treatment and is dumped directly into the Ganga through overflowing drains like the one at Dabka Ghat

It is estimated that Kanpur generates 450 MLD of sewage every day as well but the existing infrastructure can only treat around 160-170 MLD. The remainder goes to the river directly.

Rakesh Jaiswal, founder and executive secretary of non-profit Eco Friends, has been monitoring the Ganga for nearly 30 years in Kanpur. He told indiaclimatedialogue.net that there has been no new functional infrastructure that has been created after phase one of GAP despite the launch of GAP phase 2 and subsequently, Namami Gange.

“We dubbed GAP as a failed programme. All the treatment plants that are functioning currently were raised under GAP phase 1. And then, work started under GAP phase 2 and other schemes but none of that was ever completed. A 210 MLD sewage treatment plant (STP) is still under a trial run and is not even getting sufficient sewage,” he said. “What is worse is that the entire sewage of the Sisamau drain (the biggest sewage drain in Kanpur) was to be treated by this 210 STP,” unfortunately the infrastructure has not been created to make the sewage from the drain flow into this huge STP, and half of the drain’s contents will continue to flow into the Ganga.

So Kanpur both has a huge cleaning infrastructure lying idle, and drain flowing into the river – the worst of both worlds.

When Prime Minister Narendra Modi took an oath to clean the Ganga and launched a huge programme called Namami Gange, the issue of Ganga’s revival came under limelight again but environmentalists are not convinced.

“Initially we were also very hopeful. Now, the central government is thinking to augment the treatment capacity of tannery wastewater and construct a 20 MLD CETP and 5 MLD STP in Jajmau area to separate tannery wastewater from sewage,” said Jaiswal. “But the thing is that it is only being talked about. Nothing has happened on the ground yet.”

The current 36 CETP plant is run in partnership between government agencies and tannery owners, which has only complicated matters. Both the costs and the treatment operations are divided. The tannery owners are required to give primary treatment before releasing the toxic water, while the government is responsible for the functioning of the CETP.  This often leads to both the parties shrugging off their responsibility and blaming each other for the pollution mess.

Time and again, there have been talks of shifting tannery units to another location, but leather manufacturers say they are being harassed without any fault of theirs.

“Every tannery has a primary treatment unit and we don’t release water directly into the river. We pay nearly INR 14 lakh (USD 21,000) every month to run the CETP,” Qazi Naiyer Jamal, General Secretary of the Small Tanners Association, Jajmau, told indiaclimatedialogue.net. “The focus rather should be on the other 49 drains that empty sewage into the river.”

But there are gaps at each step of water treatment.

During a visit to an intermediate pumping station, Adarsh Pandey, an official of the Uttar Pradesh Jal Nigam (the state’s water supply and sewage disposal authority), found many problems. “We get a lot of trash along with the tannery waste and the mesh of the pumping station keeps getting chocked,” Pandey said. “We have to depute a person around the clock to keep clearing the mesh, which is very tedious.”

Once an IPS breaks down or underperforms, the whole chain gets further affected right till the CETP. 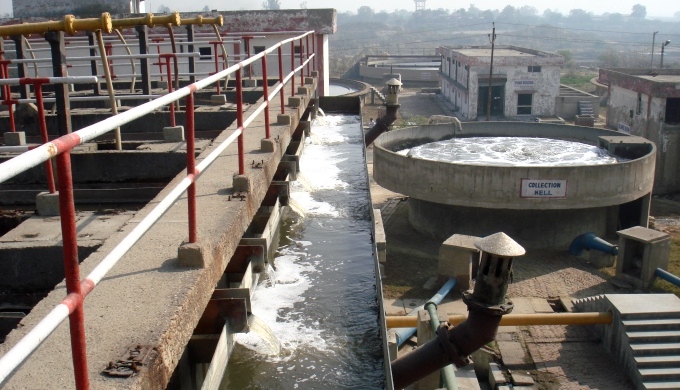 Pollution from the leather industry is not only polluting the Ganga but is impacting the groundwater and agricultural fields as well. One, there is no proper disposal system for the solid sludge that is generated during the treatment process and so it is often dumped in the open which can leach into the soil, and from there to the groundwater. Second, unorganised manufacturing units of cheap glue and chicken feed are mushrooming on the banks of the river. These use the waste from tanneries as raw material. These units are not just contaminating the soil and air but are also taking over agricultural fields of the local people.

At Piyondi village in Jajmau, due to heavy pollution, farm productivity has come down drastically. “We used to have rose plantations but due to polluted water and chromium in soil, roses have vanished from here in the last 15-20 years. Wheat productivity has also dropped by half,” said Omprakash Yadav, a farmer from the village.

While there is a need for the government to act urgently, Jaiswal says it is important that we move beyond STPs to tackle the problem of water pollution. He says that under Namami Gange, more emphasis should be on restoring the ecological flow of the river, which is crucial for diluting toxins.

“In the upstream, all the original Himalayan water is diverted into various canals. I am not sure if even few drops of real Ganga water reach Kanpur. We have hardly any water or flow in the river in Kanpur during the dry months. So pollution is much more visible,” he said. “There hasn’t been any change or any improvement on that.”