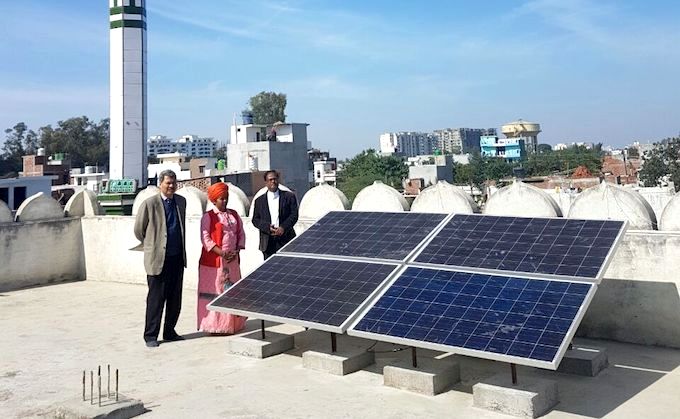 Even as Uttar Pradesh, India’s most populous state, is in the midst of electing a new government, a survey has found that there is huge support for solar energy among the majority of voters.

Uttar Pradesh lies on the fertile river basins of Yamuna and Ganga and has a population of 200 million people — three times that of Britain. Over 140 million people are eligible to vote for the state assembly elections in the state where people are grappling with multiple environment issues, the main ones being water and air pollution, even while they suffer prolonged power cuts.

As many as 87% of voters said they would opt for solar energy if it reduced pollution in their community, according to the survey. The analysis was a result of a telephone survey of 2,513 Uttar Pradesh voters between January 24 and 31.

Of the people surveyed, 94% said they would use buses or other forms of public transport if it improved. The survey was commissioned by 8minutes Future Energy Ltd, a solar power company, and conducted jointly by FourthLion Technologies, an opinion pollster, and IndiaSpend, a data journalism initiative.

“If UP were an independent country, it would be world’s sixth largest country in terms of population. 87 per cent of our sample of registered voters in this state said they would use solar energy if it helped reduced pollution. That is not only good news for climate campaigners and organisations, but it also demonstrates a healthy appetite for more solar power projects,” said Samar Halarnkar, Editor, IndiaSpend.

Uttar Pradesh has cities including Varanasi — the constituency of Prime Minister Narendra Modi — that have been categorised as critically polluted. According to the World Health Organisation, four of the world’s 20 worst polluted cities are in the state. Experts say the air could be as bad or even worse than that of Delhi.

The air in their area is polluted, 46% of urban voters said, compared with 26% of rural voters. Interestingly, there is more support for solar from people who drive two-wheelers (85% said yes) and those who don’t own any vehicle (90% said yes) compared with the voters who own cars (73%).

Speaking of this divide based on difference in incomes, Arjun Srihari, Head of Marketing and Partnerships at 8minutes, told indiaclimatedialogue.net, “There is this difference probably because rich living in the cities live in air-conditioned rooms with air-purifiers and don’t feel the direct effects of pollution as much as the poorer people who have no barriers and directly inhale the polluted air.”

At the same time, 38% of voters said they suffer power cuts every day, and 54% said they have outages at least once a week, while 26% said there were no power cuts. Electricity is the most important issue for voters (28%), the survey found.

The Indo-Gangetic belt along Uttar Pradesh hosts 10% of India’s coal-fired power generation plants. All of them are located close to the Ganga and are partly responsible for the pollution mess. Given this and the fact that the state still suffers from major power outages and that power is a big political issue, there is a clear need and scope to develop clean energy and scale up solar power capacity in the state.

Despite this, solar power development is lagging behind many other states. As per a report by Equitorials, a financial analysis firm, so far Uttar Pradesh has only achieved 13.1% of its target of installing 1.8GW of solar power by March 2017. The report was released along with the survey findings.

The issue of clean air and clean energy has been mentioned in the manifestoes released by different political parties, but there is no talk about during the campaign. “Through this survey, we hope that this crucial issue of developing solar power gets reflected in political debates,” said Srihari.

See: Ganga, Yamuna reduced to drains but no party cares

Meanwhile, India’s first all-women mosque in Lucknow, the capital of Uttar Pradesh, has shown the way by plugging into the solar energy. Situated just 500 km away from Singrauli that has about 20 GW of coal-based power capacity, Ambar mosque now runs fully on sun power through a 1kW rooftop installation put by 8minutes.

The mosque will not only feed excess power into the grid but will also reduce its carbon footprint.

In giving a public message on why the mosque has installed solar panels, Shaista Amber, who started the mosque in defiance of patriarchy and is now championing the green cause, said, “Over the last few years, air quality in the city has become worse while rural areas of Uttar Pradesh have been suffering frequent power cuts. We all are to be blamed for it and we must all do our bit to improve the air quality and access to electricity. Everybody should have access to clean air and clean electricity. Electricity produced from solar energy does not cause air pollution like coal power plants do. If everyone starts using solar energy, then Lucknow’s air quality will start to improve as well as reduce power cuts.”

Talking about environmental issues like air pollution and clean energy missing from ongoing political campaigns, Amber told indiaclimatedialogue.net, “This is a very big question that why politicians are not asking for votes based on these crucial issues. Here, the voting happens only on the basis of caste, religious sentiments and other things, while the real issues are getting missed. Both the voters and politicians are equally responsible.”