The industrial uses of solar air heating, which is gaining increasing acceptance, help in paring emissions and use of fossil fuels, and could also lead to a lower oil import bill for India

A worker checking insulation in a flat plate collector that heats air. (Photo by Jency Samuel)

Solar air heating has not received much attention in India although utilising solar energy to produce electricity and other solar thermal energy applications are popular and visible. But without much fanfare, some industries, particularly those in manufacturing, have been utilising this simple and cost-effective technology. This has helped the industries bring down their fossil fuel consumption and carbon emissions drastically.

The principle of solar air heating is quite simple. A black surface absorbs more heat than other surfaces. It also radiates the heat back into the atmosphere. A glass panel provided above the black surface at a height of one foot or so is used to prevent this loss. The unit is called a flat plate collector (FPC). With the sides also covered, the unit is a simple rectangular box that traps the heat efficiently.

“In order to transfer the heat trapped between the black surface and the glass panel, a medium such as air is required. Using a blower, the air is forced in the space, which then carries the heat to the required place through a pipe. The sides and joints of the flat plate collector are insulated properly to prevent heat loss,” C. Palaniappan of Sunbest, a company that provides consultations and solutions related to solar applications, told indiaclimatedialogue.net.

Palaniappan is also a founder member of Planters Energy Network that works towards efficient use of energy. In industrial applications, if the required temperature is higher, the air from the collector is heated additionally by conventional methods using electricity or diesel.

The advantage of solar air heating is that it reduces conventional energy consumption. For instance, in Hanon Automotive Systems India (formerly Visteon), liquefied petroleum gas (LPG) was used to heat the intake air at 35oC and raise it to 120oC for its degreaser unit. In the degreaser unit, condensers, radiators and evaporators used in automobiles are cleaned of grease with water. The parts need to be dried after the washing process, for which solar air heating is used.

“After we installed the solar heating system, the temperature of intake air increased to 70oC. This has brought down our LPG consumption,” says P. Deiva Balan, General Manager, Plant Maintenance at Hanon. The heated air, if not fully utilised, is re-circulated. As much as 270 sq. m of flat plates has enabled the company save 18,000 kg of LPG per year.

The concentrated solar heat enables drying of products faster, reducing the number of days required for a process. In Sri Kaliswari Fireworks in Sivakasi in Tamil Nadu, drying time of chemical-coated sparklers used to vary between one-and-a-half and three days when dried directly under the sun. With flat plate collectors (FPCs), the sparklers are dried in 2 to 3 hours.

Karthikeyan, who installs solar systems, says that in an air heating system he had installed for a paint manufacturer, drying time was reduced to one day, compared to the four days that it took under direct sunlight. Diamond Dye Chem in Gujarat, by installing an FPC, has been able to bring down the moisture content of solid waste from its effluent treatment plant from 60% to 5% within seven hours, enabling easy disposal. 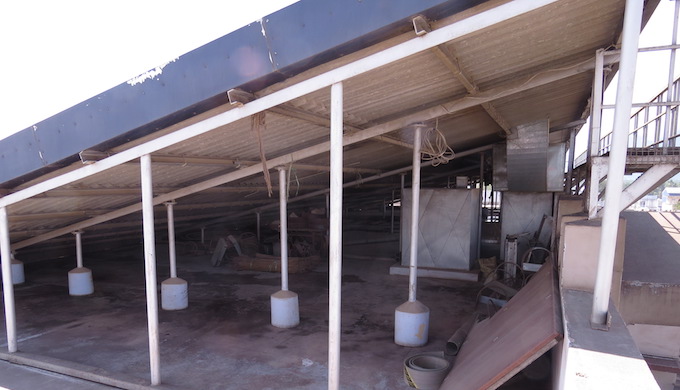 Pipes carrying the heated air from the flat plate collector to the required place. (Photo by Jency Samuel)

India’s crude oil import bill is estimated to increase from USD 64 billion in 2015-16 to USD 72 billion in 2016-17, an increase of 12.5%, according to the January 2017 report of Petroleum Planning & Analysis Cell of Ministry of Petroleum and Natural Gas. Industry experts say that 45% of the oil products, such as LPG and diesel, is used for heating purposes, and most of it can easily be replaced by solar air heating.

There is hardly any maintenance required, except periodical cleaning of the plates, and this involves negligible cost.

Contrary to some misconceptions, the industries that have opted for solar air heating for heating and drying purposes have been able to recover costs in a relatively short period.

Hanon was able to recover their investment of INR 1.8 million — with government subsidy and cost savings on LPG — in 15 months. A company manufacturing insect repellent, where Karthikeyan installed a FPC, recovered its investment in 18 months. The maximum payback period among the industries that indiaclimatedialogue.net spoke to was three years.

The latex division of TTK is able to save 200,000 units of electricity per year across five production units, with one unit of electricity reducing about 43 kg of carbon dioxide. Deiva Balan pegs Hanon’s carbon emission reduction at about 42,000 kg per year. Diesel is estimated to emit 2.58 kg of carbon dioxide per litre. On an average, TAFE’s carbon emission has come down by 26,000 kg per year.

Another indirect benefit is that, in some industrial applications, firewood use for heating is avoided. In ITC Rajahmundry, 100 sq. m of FPCs is used to dry tobacco, cutting down firewood use by 55%.

From leather drying to laundry drying, the applications are limitless, according to Karthikeyan. Sunbest has installed FPCs for Roca, manufacturing ceramic sanitary ware in Rajasthan, for a coir mattress industry in Thiruvananthapuram, for the tobacco manufacturing division of ITC and so on. Chaitanya Yardi’s NRG Technologists has installed a laundry dryer in Meghalaya, for the military, designed to function effectively even in the cloudy weather of the region.

In spite of all these factors working favourably, not many industries are keen to install FPCs. Space is seen as a constraint. Palaniappan recalls an instant where maximum energy efficiency could not be attained because of the position of the roof. Lack of experts who could design and install FPCs is seen as another major constraint.

While existing industrial roofs have to be utilised to their optimum level, the government needs to address the lack of experts and solution providers, if its target of installing one million sq. m of FPCs by 2022 is to be met.

By Soumya Sarkar
The chance of sudden, catastrophic river flooding in the western Himalayas has doubled as climate change leads to an increase in extreme rainfall events
END_OF_DOCUMENT_TOKEN_TO_BE_REPLACED

By Anjali Notandas
Concerned about the dangers of climate change and environmental degradation, children in India have taken to activism, demanding their rights to a better future
END_OF_DOCUMENT_TOKEN_TO_BE_REPLACED

By Shikha Bhasin
Proper servicing is key to efficient running of environment-friendly cooling systems, demand for which is expected to surge as temperatures rise across India
END_OF_DOCUMENT_TOKEN_TO_BE_REPLACED

By Kamal Prakash Seth
As the biggest consumer of palm oil, India can take a lead in demanding ethical palm oil production that can stop deforestation in southeast Asia and reduce air pollution
END_OF_DOCUMENT_TOKEN_TO_BE_REPLACED

By Sapna Gopal
The growth in the wind sector has been slowing for the past few years in India; this has now been compounded by disruptions due to the Covid-19 pandemic
END_OF_DOCUMENT_TOKEN_TO_BE_REPLACED

By Joydeep Gupta
Protecting just 30% of earth's land and sea could result in financial benefits of nearly USD 235 billion every year by 2050, even without accounting for ecosystem services
END_OF_DOCUMENT_TOKEN_TO_BE_REPLACED