Guwahati is the only smart city to be designated in India’s northeast, but its dreams of urban transformation are directly linked to managing its long-neglected wetlands 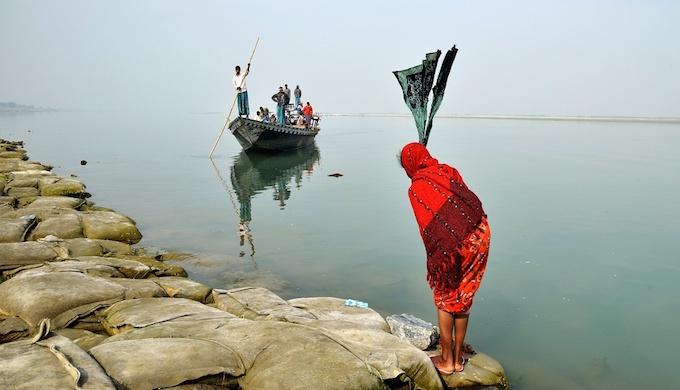 Development of the Brahmaputra riverfront, prone to floods and erosion, is key to Guwahati’s smart city plans. (Photo by Asian Development Bank)

India is going through one of the greatest urbanisation moves in the world. The recently released Economic Survey by the government estimates that the urban population was set to increase from 380 million in 2011 to 600 million in 2031. In response to this challenge, the government of India launched a Smart City initiative to choose 100 cities to be upgraded. On 28 January 2016 the first list of 20 chosen cities was released. Guwahati was the only city from India’s northeastern states to be included, and it provides an excellent template to see how crucial rivers and wetlands are to the fulfillment of smart city dreams. See: Mismanaged urbanisation and the destruction of Indian wetlands

While the government has abjured a single definition of what a smart city is supposed to be, it has provided some general guidelines. The Borsola Beel (lake) Project is the first item on Guwahati’s smart city agenda, followed by the beautification of the Brahmaputra riverfront from the Nilachal (Kamakhya) hill to the city’s centre at Sukreswarghat. An amount of INR 1 billion (USD 15 million) has already been released to the Guwahati Metropolitan Development Authority (GMDA) for the ambitious project, said the GMDA chairman, Dhiren Barua. GMDA also wants docks for vessels operating on the Brahmaputra.

The Brahmaputra riverfront remains a key focus under the Guwahati Smart City Project. The south bank river promenade is to incorporate riverfront restaurants and floating jetties. River cruises and water skiing will be encouraged to generate revenue. The project seeks to redefine the way Guwahati engages with the mighty river.

Apart from the riverfront, the second big environmental advantage Guwahati has is Deepor Beel – a permanent freshwater lake that is also a Ramsar site – in the southwest of the city. The plan is to develop this area into a wetland park and a birding destination on the lines of the Hong Kong Wetland Park. This is also expected to generate revenue through tickets, CSR funds and jungle style eco-lodges.

The smart city project will take Guwahati’s natural heritage, develop it, and monetise it.

The departments involved in the development of wetlands under the smart city project include the special purpose vehicle (SPV) to be set up for the purpose, GMDA, the Guwahati Municipal Corporation (GMC), the Jal (Water) Board, the Water Resources Department, the Public Health Department, the Tourism Department and the Assam State Electricity Board.

The omission of the forest department has raised a few eyebrows. Focussing only on monetisation, ignoring the role of Deepor Beel as an important bird habitat which hosts more than 120 species, has irked conservationists. “A water park cannot be the solution for Deepor Beel. The focus of the government should be to conserve the wetland ecosystem of this wildlife sanctuary rather then turning it to a recreational park with the sole intention of revenue generation,” said Indrajeet Dutta of the Kaziranga Wildlife Sanctuary.

“Deepor Beel, an ideal destination for thousands of migratory species, has witnessed a sharp decline in the number of winged visitors over the years. Construction of a railway line, major road linkages as well as growth of industrial units in and around the wetland’s vicinity shattered its once pristine habitat. No further intervention should be made in this important bird area. Let it remain a wetland only,” said P.C. Bhattacharjee, a former professor who retired as the head of zoology department at Gauhati University.

Another challenge is whether the city’s administration is actually up to the task. Guwahati has been an administrative capital since the British colonial period, but now the city is crumbling under the weight of its expanding population. Inadequate public infrastructure raises many uncomfortable questions for the government departments especially those entrusted with the implementation of the Guwahati Smart City Mission.

The riverfront is a zone of economic activity, and also a trash dumping site. (Photo by Omair Ahmad)

Out of 73 cities surveyed Guwahati ranked 50th in the list of the cleanest cities in the country. This reflects badly on the civic administration. The broad guidelines of the smart city mission list good waste management is essential – it ranks third out of the ten “core infrastructural elements”. Unfortunately, this does not seem to match the priorities of the GMC, which has Boragaon in the vicinity of Deepor Beel as the city’s garbage dumping site.

When a team from the Planning Commission – since replaced by the NITI Aayog – visited in 2008 they were informed that Guwahati does not have a sewage treatment plant and raw sewage is directly discharged into the Brahmaputra and the lake, via Basistha Bahini inlet canal.

The city is still struggling to deal with this challenge.

After waste management, the big challenge is waterlogging. As part of the smart city plans, the state government is contemplating emphasising rainwater harvesting, but the failure to deliver any concrete solution to tackle the city’s waterlogging still hangs heavy. Assam’s Minister for Education, Health and Finance Himanta Biswa Sarma recently said that the GMDA should not allow any new building to be used for any purpose till they have a rainwater harvesting provision. At the same time, he added that the “government is looking for more innovative and out-of-the–box ideas to solve the perennial problem of floods in the city”. Last year some areas of the city remained submerged for more than three days.

The city suffers from flash floods due to a combination of intense rainfall, unsystematic land use, and its bowl-like topography. Guwahati receives rainwater in huge volumes from the Meghalaya hills that add to the waterlogging problem. Given the volume of rainwater it receives, the main storm-water carrying channel—the Bharalu – simply does not have the carrying capacity to deal with it. Continuous encroachment on all the major wetlands around the city — Deepor Beel, Bor Sola Beel , Xoru Sola Beel and the Silsaku – has led to a drastic reduction in their water retention capacity. Once occupying 4,000 hectares, Deepor Beel has shrunk to less than 500 hectares. Maintaining the health of the natural channels such as the Bharalu and the Bahini besides all the wetlands is critical to maintaining the city’s ecology and civic utilities.

A 2014 report by the Assam State Disaster Management Agency highlighted the fact that Guwahati is currently unprepared to manage floods – and that climate change will increase their intensity in the future. For its own sake, and if the smart city effort is to have any hope at all, Guwahati must make managing its wetlands a key priority.

While the central government will assist with money for the Smart City project, state and municipal governments need to play a larger role. City authorities have to mobilise resources by forming SPVs with public-private partnerships. For Guwahati, the total money from the centre plus the SPV being set up to deliver the smart city plan is scheduled to release a grant fund of INR 1.94 billion (USD 29.65 million) in the first year, with another INR 26 billion over the next four years.

This report was first published on The Third Pole.

By Soumya Sarkar
The United Nations has warned that immediate action is needed to face the triple environmental emergency of climate change, biodiversity loss and pollution
END_OF_DOCUMENT_TOKEN_TO_BE_REPLACED

Can India compete with China in solar module production?

By Shally Seth Mohile
Weak consumer appetite, lack of charging infrastructure and a high payback period is holding back adoption of electric cars for personal use in India
END_OF_DOCUMENT_TOKEN_TO_BE_REPLACED