With temperatures already topping 40 degrees Celsius in many places and a tepid outlook for an ample monsoon by some forecasters, southern Asia is likely to suffer through yet another recording-breaking summer

If it’s this hot in March, what will it be like in April, May or June? That has been the near inevitable conversation starter in large parts of India and Pakistan over the past few weeks. As temperatures crossed the 40-degree Celsius mark in many places in the second half of March, wistful thoughts of spring vanished in the heat and dust.

There is more substantial damage as the heat is worsening the drought in Tamil Nadu and Karnataka. Farmers from Tamil Nadu — including from the Cauvery delta, traditionally known as India’s rice bowl — have been sitting in protest in national capital New Delhi for weeks, carrying skulls which they say are of farmers forced to commit suicide. The state’s high court has ordered that loan waivers be extended to more farmers. Elsewhere, the new Uttar Pradesh government has announced a large-scale loan waiver for farmers.

By March 30, the water available in India’s 91 largest reservoirs monitored by the Central Water Commission was already down to 52.632 billion cubic metres, 33% of the total live storage capacity of these reservoirs. The water bureaucracy has not pressed the panic button yet because this is marginally above (102%) the average availability in these reservoirs over the last 10 years. But the all-India average hides the fact that reservoir levels are significantly below the 33% level in the arid regions of central India. They include the region to which trainloads of water had to be transported last summer. See: Deaths multiply in parched Marathwada

As the temperature rises, the state of the monsoon becomes uppermost in everyone’s thoughts all over South Asia. Government-run meteorological departments have not come out with their monsoon forecasts yet, but private ones have predicted below average rainfall this year, adding to the gloom.

South Asia gets over three-quarters of its annual rainfall during the June-September monsoon season. Though agriculture accounts for only around 12% of India’s GDP now, over half the population is still dependent on farming, and an estimated 61% of farmers are without irrigation facilities and are totally dependent on rainfall. All these percentages are higher in Bangladesh, Nepal and Pakistan.

Two interrelated questions arise from the heatwaves and droughts that are repeating themselves summer after summer. First, are the authorities prepared for this? Second, are these related to climate change? If they are, authorities need to be even better prepared, because the Intergovernmental Panel on Climate Change (IPCC) has predicted that weather extremes will become more frequent and more intense in a warmer world.

South Asians have some traditional ways of ameliorating the effects of extreme heat — avoid going out in the middle of the day; if you have to go out, first drink lots of water; concentrate on yogurt-based food and so on. But there are people — mostly those who earn their livelihoods through physical labour — who cannot afford to stay indoors or buy sufficient yogurt-based food. The authorities have to find ways to provide them with shade and water, if nothing else. 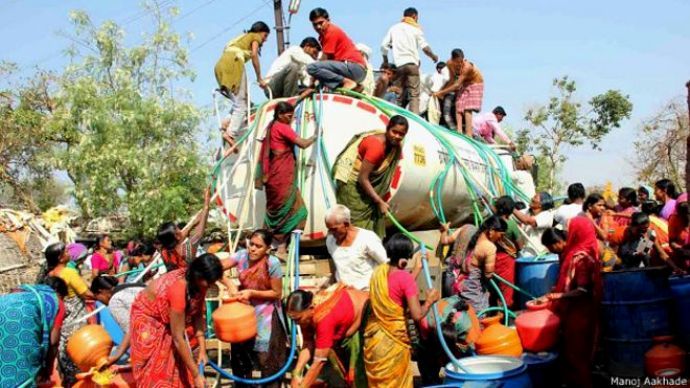 Some common-sense methods of doing these have now been put together in the Ahmedabad Heat Action Plan, which is credited with reducing heatwave deaths from the hundreds to the dozens in the city between 2010 and 2015. The plan includes a phone-based warning system when the weatherman forecasts a very hot day. India’s National Disaster Management Agency is now trying to convince municipalities around the country to adopt the plan. The only obstacle appears to be political rivalry or lack of political will. See: Readying for an Indian summer

The other problem is that the Ahmedabad plan is for urban areas. There is nothing for villages. There are fewer heatwave-induced deaths in villages, because peak summer is a slack agricultural season anyway. But with heatwaves now coming as early as March, villages need plans too. Late March and early April is the harvesting season for the winter crop in South Asia — farmers and their employees cannot afford to stay indoors at the time.

Every summer, many more people die due to poor quality water and dehydration than due to heatstroke alone. The need for water in the pre-monsoon months is the primary driver for all the water storage structures in South Asia, both traditional and modern. The big problem there is that the modern – in the form of dams and deep tubewells – has largely supplanted traditional storage structures such as ponds and stepwells. As the population has grown and those with more political-economic power have drawn more water, the modern supply systems keep breaking down in large parts of the region just when they are needed most.

There are numerous examples of this, from sugarcane farmers in Maharashtra depleting aquifers with their deep tubewells to industry-level farmers in Pakistan’s Punjab holding back the waters of the Indus and its tributaries to the detriment of downstream Sindh. The verbal water wars that break out all over the region every summer can very easily slip towards more violent forms. See: Water mismanagement deepens crisis in Marathwada town

In India, the crux of the problem is the inability of legislators at either central or state levels to regulate groundwater extraction. There are guidelines that are breached far oftener than they are observed. Effectively, anyone who owns a piece of land also owns the water underneath. With India topping the list of countries in groundwater extraction, this has long been unviable. The situation will not improve till politicians are willing to acknowledge that there is an elephant in the room.

Meanwhile, there are a few bright spots that can serve as models. NGOs such as the Alwar-based Tarun Bharat Sangh, the Pune-based Watershed Organisation Trust, Sukhomajri on the outskirts of Chandigarh, Ralegan-Siddhi in Maharashtra, farmer’s groups in Andhra Pradesh that measure soil moisture and then take a collective decision on how much water they will pump – have all shown that it is possible to keep the water table high and manage the worst effects of a drought by planting native trees and grasses and looking after them. The problem has always been in scaling up these initiatives – a problem that has little to do with technology but is mostly about the failure of cooperative management.

Failure is becoming an increasingly dangerous option in a climate-changed world. Scientists are now able to go beyond the statistical prediction made by IPCC and can ascribe individual events to climate change, as they did for the May 2015 Telangana-Andhra Pradesh heat wave which killed nearly 2,500 people. See: Andhra-Telangana heat wave repeat ten times more likely

Even when the scientists cannot find a direct connection with climate change — as in the case of the 2016 Rajasthan heat wave — they qualify their statements by saying the connection may be masked by other pollutants such as dust, soot, sulphur dioxide, oxides of nitrogen, carbon monoxide, ozone and so on.

For the policymakers, the implication is obvious. They cannot ignore other forms of pollution – which are estimated to be killing seven million people a year worldwide. But scientists are warning that clearing up the skies will make it hotter – in the case of the Telangana-Andhra Pradesh heat wave, they forecast that it may be repeated every second year if all other pollutants are taken out of consideration. So, policymakers have to be prepared for a world with stronger heat waves and droughts.

By Steve Cole, Erin Guiltenane
In the largest-ever study of glacial lakes, researchers have found that the volume of water in these lakes worldwide has increased by about 50% since 1990
END_OF_DOCUMENT_TOKEN_TO_BE_REPLACED

By Soumya Sarkar
The planet is losing biodiversity at an unprecedented rate, posing grave danger to human health and prosperity, the UN Convention on Biological Diversity warned in its flagship report
END_OF_DOCUMENT_TOKEN_TO_BE_REPLACED

By Soumya Sarkar
The chance of sudden, catastrophic river flooding in the western Himalayas has doubled as climate change leads to an increase in extreme rainfall events
END_OF_DOCUMENT_TOKEN_TO_BE_REPLACED

By Anjali Notandas
Concerned about the dangers of climate change and environmental degradation, children in India have taken to activism, demanding their rights to a better future
END_OF_DOCUMENT_TOKEN_TO_BE_REPLACED

By Joydeep Gupta, Karmistha Bhimwal
The floods, a disaster that Assam suffers every year, now deposit sand on farmlands along rivers because the fertile silt is held back by dams
END_OF_DOCUMENT_TOKEN_TO_BE_REPLACED

By Birsha Ohdedar
India should rewrite outdated, colonial laws and empower local people in the Sundarbans so that embankments to keep out the sea work for communities and nature
END_OF_DOCUMENT_TOKEN_TO_BE_REPLACED

By Soumya Sarkar
Increasing heat-related deaths due to climate change reveal an unequal world, with people in poorer countries at much higher risk, latest research shows
END_OF_DOCUMENT_TOKEN_TO_BE_REPLACED
Share This