Climate change: the case for hope

The core problems driving climate change are not going to disappear, but both the sense of danger and a strategy based on hope for peaceful change are necessary to create a better world

The Arctic Sea ice is thinning due to climate change. (Photo by NASA/Kathryn Hansen)

For those of us who grew up in the 1980s, the threat of global nuclear annihilation was a constant feature of media discourse. When the classic movie on the topic, Dr Strangelove, was made in 1964 by Stanley Kubrick, it was ahead of its time. By 1983, though, the topic was common enough to be the central peg in the teenager film War Games, and was even the topic of the song, Russians, in Sting’s first solo album, The Dream of Blue Turtles, which was released in 1985.

Popular culture was steeped in the feeling of doom, while at the same time there was a realisation that global politics had reached a dead end. As Sting sang, “There’s no such thing as a winnable war/It’s a lie we don’t believe anymore,” the leaders of the US, the UK and the erstwhile Soviet Union began talks to scale down the nuclear threat. Before the end of the decade, the Cold War was over.

Nuclear weapons have not disappeared, and are still a concern for us today. A nuclear war between India and Pakistan would throw up 5 million tonnes of black carbon into the atmosphere, cause global famine, change rain patterns, shorten planting periods, and cause a global cool down for 25 years. This would be in a war involving 100 small nuclear devices, while there are 17,000 currently in the world. Nevertheless, today we do not live in a world dominated by the feeling of impending doom brought about by nuclear catastrophe. Instead we live in a world threatened by a climate change catastrophe.

The last report of the Intergovernmental Panel on Climate Change (IPCC), the Fifth Assessment Report (AR5) released in 2014, made it clear that, unless steps were taken, manmade climate change carried “the likelihood of severe, pervasive and irreversible impacts for people and ecosystems.” It is probable that the focus on severe and irreversible change — the thought of glaciers disappearing from the Himalayas, of the polar ice caps melting completely and leading to a warmer ocean, and up to 200 million people being displaced — was the major factor that helped pave the way for the Paris Agreement. But to focus on only the risk may not tell the whole picture. 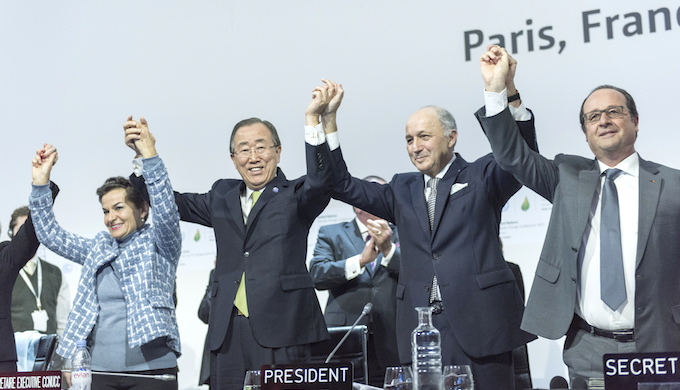 The Paris agreement pledges are likely to live on, with or without the US. (United Nations Photo)

Speaking about the future, AR5 states, “Limiting climate change would require substantial and sustained reductions in greenhouse gas emissions which, together with adaptation, can limit climate change risks.” This is the challenge we currently face. As with a world filled with nuclear weapons and nations at each other’s throats in the 1980s, humanity is unlikely to survive — or at least survive in any way comparable to the conditions in which we now live — if we continue to follow the standard path.

The good news is that the change has already started to take place. As the Trump administration dithers over his promise to pull out of the Paris agreement, most of the rest of the countries will continue to persevere with their commitments. The blunt answer is that it is in their self-interest to do so. Nothing else would explain why China, a country that accounted for 25% of global emissions in 2014, has emerged as the biggest investor in renewable energy. As Barbara Finamore and Alvin Lin wrote in November 2016, “In 2015 alone, China invested $102 billion in renewables, more than the U.S. and EU combined, and installed half of new wind power capacity globally and 1/3 of new solar capacity.”

For developing countries the renewable sector provides a huge new opportunity, one that they may be able to compete on equal terms with developed countries, not least because much of the new installed capacity will have to be for them. For countries like India and Bangladesh, which would have 12.6 million and 10.2 million people at risk, respectively, due to rising sea levels, there is a strong element of self-preservation as well. Even global corporations such as Marks & Spencer have come to understand that ignoring climate change just does not make good business sense.

Does this mean we are home free? Unfortunately no; we are not even close. As I walked around in Kathmandu in Nepal where I was attending a conference organised by the IPCC and the International Centre for Integrated Mountain Development (ICIMOD), the city was caked by the dust from a massive road expansion project — as it has been for months. A Nepali friend joked that the environmental assessment must have been to safeguard each molecule of dust, rather than humans. This kind of casual attitude to environmental assessments hardly shows the type of attitude change that is needed. Bangladesh, one of the countries most vulnerable to climate change, is expanding its electricity generation capacity massively, and the share of coal-based plants is projected to increase from 2% to over 50%. Coal burning from South Asia is directly linked to black carbon deposits in the Himalayas, which have led to rapidly shrinking glaciers.

As with the nuclear crisis that helped propel us to the negotiations that ended the Cold War, the core problems driving man-made climate change are not going to disappear, even if they may be diminished, and we can try to adapt to some of their effects. Nevertheless, as the nuclear crisis showed us, both the sense of danger and a strategy premised on hope for a peaceful change are necessary to create a better world. Fear alone is not enough.

India’s climate diplomacy has to move up a gear

By Jai Kumar Gaurav, Akshar Bhatt, Kundan Burnwal
A long-term low-carbon economic strategy can help a country to reduce policy uncertainty, which would help investment decisions by both the public and private sectors
END_OF_DOCUMENT_TOKEN_TO_BE_REPLACED

By Navroz K Dubash
While an Indian net-zero announcement may add to the international momentum, it also risks being a hollow pandering to global pressures at best
END_OF_DOCUMENT_TOKEN_TO_BE_REPLACED

By Soumya Sarkar
The United States under President Joe Biden has re-entered the Paris climate agreement, providing a renewed impetus to act on the world’s deepening climate crisis
END_OF_DOCUMENT_TOKEN_TO_BE_REPLACED

By Joydeep Gupta
India is meeting its current unambitious pledge, but it is still pushing coal and failing to protect natural resources needed to protect people from the worst impacts of climate change
END_OF_DOCUMENT_TOKEN_TO_BE_REPLACED

By Lou del Bello
Developed countries are taking action to reduce their own carbon emissions, but they are not coughing up enough money to help vulnerable poorer countries do the same
END_OF_DOCUMENT_TOKEN_TO_BE_REPLACED

By Joydeep Gupta
US president-elect Joe Biden has strong popular backing to deliver action on climate change, which could provide impetus for countries worldwide to follow suit
END_OF_DOCUMENT_TOKEN_TO_BE_REPLACED