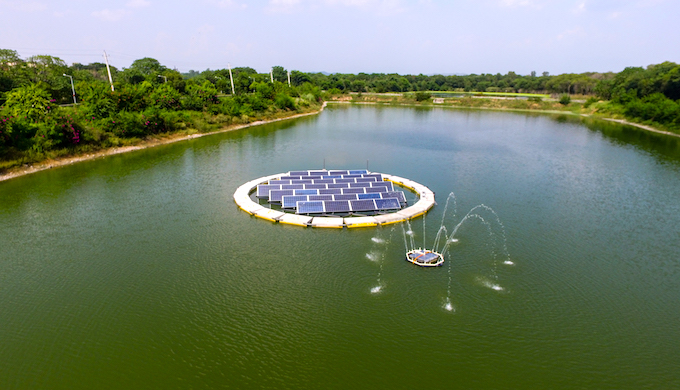 The floating solar power plant at Dhanas lake in Chandigarh. (Photo by Yellow)

Solar power plays a big role in India’s renewable energy dreams, with best-term forecasts suggesting that up to 20% of its electricity generation by 2040 would be from solar energy alone. But a number of questions remain unanswered, including issues of land availability, efficiency of solar plants and grid stability.

The key issue has to do with land acquisition — one of the most contentious issues in Indian, indeed global, politics. Conventional solar plants require large, relatively flat areas devoid of vegetation. While some parts of northwestern India have such land available, parts of the south and eastern parts do not. Population density and green ecosystems means that acquiring such land would mean either displacing people or using cropland, or both, making it a politically fraught process. Instead, in 2014, the southern state of Kerala started pursuing leads for floating solar power projects, and inaugurated a scaled up version in 2016. The western state of Maharashtra has also been pursuing similar technologies.

The big challenge in all of these projects has been to make them cost-effective, and a new Indian firm, Yellow, is promising to do just that. Having completed their first pilot project in Chandigarh, they have created a more efficient solar power plant, and one that might be a model for use in cities with large water bodies.

Speaking to indiaclimatedialogue.net, Vivek Jha and Rakesh Chauhan of Yellow described how the idea came about. The initiative was taken by the Chandigarh Renewable Energy and Science & Technology Promotion Society (CREST) and the Chandigarh Administration, which became concerned over fish dying in Dhanas lake in Chandigarh. A man-made lake, Dhanas had declining levels of oxygen, and the administration was looking at finding a cost effective way of aerating the water to through fountains to improve the oxygen levels in the lake. A small power plant of 10KWp that would supply electricity to the two fountains in the lake was commissioned.

In building the plant, Yellow added their own particular innovation — a mechanism through which the solar panels could track the sun, vastly increasing their efficiency and thus their cost effectiveness. Speaking to indiaclimatedialogue.net, they explained, “Solar panels provide the best energy output when they are perpendicular to the rays of the sun. To do this, a solar panel needs to move (like a sunflower) to follow the sun’s path during the day both from east to west (azimuthal tracking) as well as up and down, as the sun rises from the horizon in the morning and goes up to its zenith during mid-day, and then sets in the evening (altitude tracking). Our technology allows this tracking at low cost, thus increasing the energy output from the power plant by as much as 25% to 35%.”

Furthermore, because of its very nature, the solar power plant used in Dhanas lake has to be ecologically friendly, made from non-polluting materials, which are either recyclable or upcyclable (reusing bye products or waste material to create new, environment-friendly components).

While the obvious advantage of the project is that it demonstrates a cost-effective and environmentally friendly way to provide the energy needed to conserve urban water bodies, the Yellow team have far larger ambitions. These types of power plants, they argue, are ecologically friendly, do not displace people, and do not require clearing of vegetation, making their installation costs to the ecology very low. Furthermore they can be combined with livelihood activities such as hatcheries, and by covering exposed water areas, they help cut down water loss-through evaporation, as well as reduce algal blooms.

Maybe most importantly, the only way that India could develop a balanced solar grid would be if states in the south and east, where land is scarce but water bodies are available, starting expanding their solar ambitions through land-neutral solar projects.

“Currently the placing of the solar projects in India indicates a bias towards states located in the western and southern regions of the country,” the team told indiaclimatedialogue.net. “This implies that a major chunk of power generated through solar projects may come from the western and southern grids. Solar energy, by definition is erratic and weather dependent. If there is large cloud cover over these regions, there will be a huge power drop in the grid, since the solar projects are concentrated in one or two regions. This could lead to a grid imbalance.”

Unlike open land available for solar projects, water reservoirs are equitably spread across the country. “These reservoirs have a cumulative surface area of 38,000 sq. km. If we utilize only 30% of this available, yet under-utilized, area we could add a capacity of approximately 750 GWp – seven times our solar ambition,” Jha and Chauhan said. “An interesting point to note is that if we install and commission approximately 1 GWp of a land-neutral solar power plant, we can mitigate evaporation losses which are equivalent to building a new large sized dam with a water storage capacity of 20 million cubic metres.”