A new study looks at five major impacts of climate change, the sectors and the people most vulnerable

Communities along Bangladesh’s southwest coastline struggled to rebuild their lives after Cyclone Alia struck in May 2009. (Photo by Mohammad Rakibul Hasan / CGIAR)

Almost 750 million people in South Asia were affected by floods, droughts, extreme rainfall, heat waves and sea-level rise — all impacts of climate change or worsened by it — in the first decade of this millennium, according to new research by the International Water Management Institute (IWMI).

Agriculture was the sector most vulnerable to these impacts, authors of the report found. The Indo-Gangetic plain was at maximum risk. The causes and effects of these disasters have been studied sporadically in the past. Now the authors of this report have applied a consistent methodology to study them, including assessment of the population affected along with agricultural losses. The study has used spatial data and customised tools.

The authors — Giriraj Amarnath and Niranga Alahacoon of IWMI; Vladimir Smakhtin of the United Nations University, Institute for Water, Environment and Health in Ontario, Canada; and Pramod Aggarwal of the CGIAR Research Programme on Climate Change, Agriculture and Food Security — carried out regional, country-wise and sub-national assessments of the five climate-related risks. They did this by overlaying climate hazard, sensitivity and adaptive capacity maps, following the vulnerability assessment framework of the Intergovernmental Panel on Climate Change (IPCC). With this, they developed a combined index based on hazard, exposure and adaptive capacity to identify areas susceptible to extreme risk.

Of the affected population, 72% is in India, followed by 12% each in Bangladesh and Pakistan. The remaining 4% are spread across Bhutan, Nepal and Sri Lanka.

Climatic upheavals had a direct impact on the economy of the South Asian countries in this decade, the authors say. Agriculture was identified as the most vulnerable sector due to its exposure to climate extremes. Analysing individual climate-related impacts, the authors found that floods and droughts affect agricultural areas the most, followed by extreme rainfall, extreme temperature and sea level rise.

In South Asia, the regions most vulnerable to climate-related hazards were found to be all of Bangladesh; Andhra Pradesh, Bihar, Maharashtra, Karnataka and Orissa in India; Ampara, Puttalam, Trincomalee, Mannar and Batticaloa in Sri Lanka; Sindh and Balochistan in Pakistan; central and eastern Nepal; and the transboundary river basins of Indus, Ganga and Brahmaputra.

Globally, in 2011, some 45% of recorded deaths and around USD 1,209 billion in economic losses were due to climate-related disasters. According to a World Bank report on the main hot spots of natural hazards, about 3.8 million sq. km and 790 million people in the world are highly exposed to at least two climate-related hazards, while about 0.5 million sq. km and 105 million people are exposed to three or more hazards.

More than one-third of the world’s land area is flood-prone, affecting about 82% of the global population. Between 1980 and 2011, 212,460 deaths were associated with floods worldwide.

Droughts are recurrent in South Asia, and their impacts on agriculture are enormous. In 2002-03, South Asia faced one of its worst droughts. In India alone, a drought has been reported at least once in every three years in the last five decades. The country incurred financial losses of about USD 149 billion and approximately 350 million people were affected due to droughts in the past 10 years.

An increase in the frequency and severity of heat waves can lead to crop failure, increased livestock mortality, increased human illnesses and deaths, and power outages.

The affected in numbers

The study found that in South Asia, people affected by droughts in the first decade of this century formed the largest group, 293 million, followed by those affected by extreme rainfall (220 million), floods (170 million), extreme temperature (76 million) and sea-level rise (59 million). Those living in the Indus, Ganga, Brahmaputra and Meghna river basins were particularly exposed to flooding from 2000 to 2012.

Populations with high exposure to heat waves from 2001 to 2013 include most parts of north-western and southern India; most of Pakistan; and central and eastern Sri Lanka. States prone to heat waves were Andhra Pradesh, Telangana, Punjab, Uttar Pradesh, Odisha and Bihar in India; and Sindh, Punjab, Balochistan and Khyber Pakhtunkhwa in Pakistan.

Exposure to sea-level rise was the highest in the states of West Bengal, Odisha and Maharashtra in India, followed by Bangladesh, Sindh in Pakistan, and Sri Lanka. Low-lying coastal cities particularly vulnerable to the risks of storm surges and sea level rise include Karachi, Mumbai, Chennai and Dhaka. 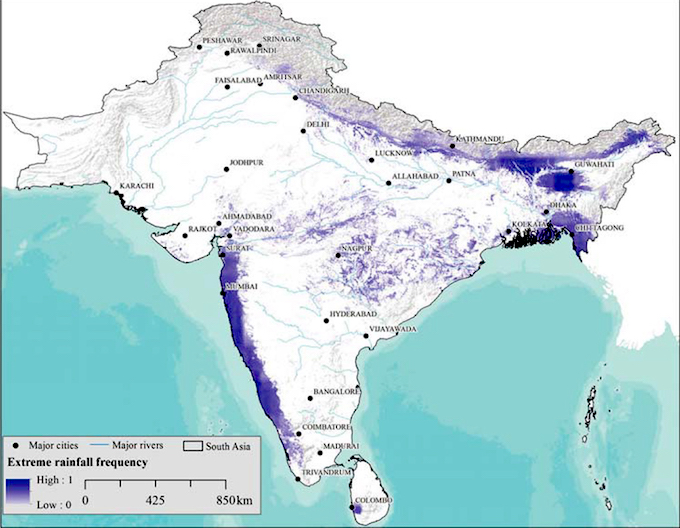 These cities are likely to become more vulnerable to flooding in future because high seawater levels provide a higher base from which storm surges advance. Higher seawater levels will also potentially increase the risk of flooding due to rainstorms, by reducing coastal drainage, because sea-level rise also raises the local water table.

The study was launched in Patna recently. Participants at the launch discussed key initiatives on flood insurance and drought monitoring to handle such crises. Advances in satellite technology and modelling tools were discussed, especially for drought monitoring. The working of the 2015 Index-based flood insurance project was analysed, with the aim of developing effective pay-out schemes to protect low-income communities in flood-prone areas.

“This project, apart from being the first such attempt on a large scale in two countries – India and Bangladesh – is also a trendsetter for catastrophe insurance in natural disaster-prone developing countries,” said Giriraj Amarnath, lead author of the study. “The setup and social network are further advanced in India and are in the final stage of implementation.”

“Risk transfer and climate adaptation strategies are the need of the hour for a vulnerable region like India. Resilience needs to be built at multiple levels from institutional setups to building physical infrastructure,” said Alok Sikka, IWMI-India Representative. “Key partnerships across the value chain would help in better preparation and response to future extreme climate events.”

By Mayank Aggarwal
India proposes to open 52 new coal mines of at least one million tonne capacity each, which could increase the country's methane emissions by 45 million tonnes in 20 years
END_OF_DOCUMENT_TOKEN_TO_BE_REPLACED

By Soumya Sarkar
High heat and humidity will take an increasing toll in death and ill-health in India and other tropical countries unless global temperature rise is limited to 1.5 degrees Celsius
END_OF_DOCUMENT_TOKEN_TO_BE_REPLACED

By Deepa Padmanaban
Climate change has hastened the melting of snow in the Himalayas in recent decades, creating unprecedented vulnerabilities that scientists are yet to fully understand
END_OF_DOCUMENT_TOKEN_TO_BE_REPLACED

By Joydeep Gupta
Climate change made the Uttarakhand flash flood in the Indian Himalayas possible, and poor development policies on building dams and roads made it disastrous
END_OF_DOCUMENT_TOKEN_TO_BE_REPLACED

By Soumya Sarkar
The United Nations has warned that immediate action is needed to face the triple environmental emergency of climate change, biodiversity loss and pollution
END_OF_DOCUMENT_TOKEN_TO_BE_REPLACED

By Joydeep Gupta, Soumya Sarkar, Varsha Singh
As the world warms and glaciers retreat faster, there is need to brace for more disasters and minimise impacts by reviewing ill-planned dams and roads in the Himalayas
END_OF_DOCUMENT_TOKEN_TO_BE_REPLACED

By Deepa Padmanaban
Rising temperatures are changing the water cycle, with less water is being replenished in river basins in the Himalayas, which has serious implications for water security in India
END_OF_DOCUMENT_TOKEN_TO_BE_REPLACED