As India ratchets up its renewables capacity, the domestic wind and solar energy sector is slated to open up more than a million employment opportunities in the next five years 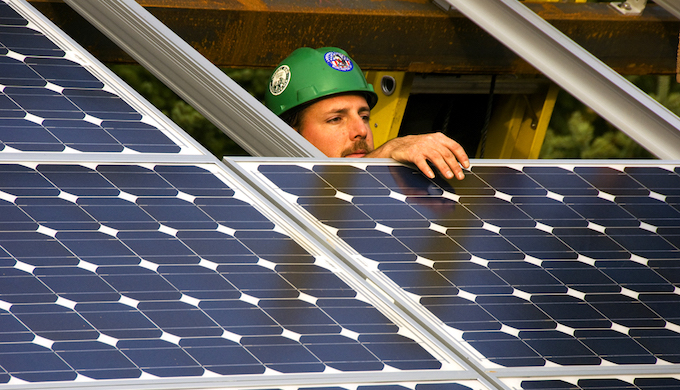 A worker checks the placement of a solar panel.

India’s ambitious aim to install 160 GW of renewable energy by 2022 will have a positive impact on the country’s jobs market, a new study has predicted, which says that more than 300,000 full-time workers will be needed in these five years and there’s potential to create around one million employment opportunities.

Of the many segments of the renewables sector, the labour-intensive rooftop solar component will employ as much as 70% of the new workforce, creating seven times more jobs than large-scale projects such as solar farms, said the study titled Greening India’s Workforce: Gearing Up For Expansion of Solar and Wind Power in India.

The report, published this month by the Council on Energy, Environment and Water (CEEW), a New Delhi-based think tank, and the Natural Resources Defense Council (NRDC), a New York-based environmental advocacy group, said that the strong growth in the domestic solar manufacturing industry could provide full-time employment for an additional 45,000 people in India.

The study estimated that India’s clean energy goals have the potential to put 34,583 people to work in wind power, 58,647 in utility-scale solar farms and 237,980 in rooftop solar energy jobs over the next five years. The solar energy jobs will be distributed across India, with Maharashtra and Uttar Pradesh setting the pace. The wind sector jobs, like wind power capacity, are likely to be concentrated in a few states that have high wind potential.

“CEEW and NRDC’s study captures a new dimension in accurately assessing manpower requirements in the solar and wind domains,” Praveen Saxena, Chief Executive Officer of Skill Council of Green Jobs, said in a statement. “This study builds on earlier analyses on the subject considering national objectives to meet India’s international clean energy commitments. It makes the path of Skill Council of Green Jobs more clear and visible in terms of capturing the opportunity of employability in India’s solar and wind sector.”

NRDC and CEEW have annually surveyed India’s solar and wind companies, developers and manufacturers over the past three years to collect market-based information on jobs created, workforce employed and the skills required to achieve India’s renewable energy goals.

Based on these observations, the June 2017 study has listed key recommendations for the federal and provincial governments. It has suggested a greater impetus and policy priority to rooftop solar to create renewable energy jobs, initiative to support development of training centres led by the private sector to source construction jobs locally since solar jobs are distributed among states, develop wind power training centres based on state-specific wind targets in eight windy states, and target a strong domestic solar manufacturing industry to provide employment to an additional 45,000 people in India.

India’s renewable energy sector is expected to create 300,000 full-time jobs in the five years to 2022.

“Clean energy expansion is generating thousands of new jobs while meeting India’s climate and economic goals,” said Nehmat Kaur, India Consultant at NRDC. “With this tremendous opportunity, India is stepping up as a global leader in demonstrating how a growing economy can scale up renewables, generate employment and provide access in the face of rising energy demands.”

Some 80% of the new workforce is likely to be employed during the construction phase, according to Neeraj Kuldeep, Programme Associate at CEEW. “However, despite these being contractual jobs, the large pipeline of renewable energy projects creates enough opportunities for workers to stay employed,” Kuldeep said. “Additionally, since most of these jobs are in the rooftop solar PV (photovoltaic) segment, central and state governments must provide greater policy support to the rooftop sector.”

By Soumya Sarkar
The chance of sudden, catastrophic river flooding in the western Himalayas has doubled as climate change leads to an increase in extreme rainfall events
END_OF_DOCUMENT_TOKEN_TO_BE_REPLACED

By Anjali Notandas
Concerned about the dangers of climate change and environmental degradation, children in India have taken to activism, demanding their rights to a better future
END_OF_DOCUMENT_TOKEN_TO_BE_REPLACED

By Shikha Bhasin
Proper servicing is key to efficient running of environment-friendly cooling systems, demand for which is expected to surge as temperatures rise across India
END_OF_DOCUMENT_TOKEN_TO_BE_REPLACED

By Kamal Prakash Seth
As the biggest consumer of palm oil, India can take a lead in demanding ethical palm oil production that can stop deforestation in southeast Asia and reduce air pollution
END_OF_DOCUMENT_TOKEN_TO_BE_REPLACED

By Sapna Gopal
The growth in the wind sector has been slowing for the past few years in India; this has now been compounded by disruptions due to the Covid-19 pandemic
END_OF_DOCUMENT_TOKEN_TO_BE_REPLACED

By Joydeep Gupta
Protecting just 30% of earth's land and sea could result in financial benefits of nearly USD 235 billion every year by 2050, even without accounting for ecosystem services
END_OF_DOCUMENT_TOKEN_TO_BE_REPLACED