Villagers get together to push desert back

The Watershed Organisation Trust has been awarded the prestigious 2017 UN Land for Life award for helping hundreds of villages to harvest and manage water in the drier regions of India, as in this Maharashtra village where residents got together to fight desertification

Wankute, a village in Ahmednagar district of Maharashtra, was teetering on the edge of disaster in 2003, riddled with poverty and rife with politics. The landscape around the village was bleak and thorny — black basalt rock that heated up in raging summers, and the few cacti that managed to survive them.

Sitting on top of the hills in a rain-shadow region, Wankute was starved of water. All the rain that fell rushed out into the valleys. For three months in a year, water tankers lumbered up the hill to distribute water to Wankute and neighbouring villages.

The rest of the year, the women trudged long distances to fetch water and firewood for the family, while the men went off to towns in search of work and wage, leaving families behind. With just five hectares of land under perennial irrigation and 20 hectares under seasonal irrigation, and over 150 hectares that completely depended on rain, there was just not enough food produced to support the families.

Then the people of the village heard about watershed development and its impact on making dry, poor, barren villages lush and green. After visiting villages where this had actually happened and seeing the transformation first hand, Wankute residents decided this was what they needed for themselves.

But the transformation of Wankute from parched to lush was not about to happen overnight. It came with its own share of challenges and difficulties. With Watershed Organisation Trust (WOTR), a non-profit based in Pune, acting as a catalyst and enabling partner, the Jai Malhar Village Watershed Committee (a 25-member team, including five women) and the Forest Protection Committee (a 14-member team, including three women) worked together to find solutions for their water woes and all the challenges that came with it.

The greatest challenge they faced was trying to unite a village that had been so used to being divided on the basis of caste, class and gender. In addition, villagers found it difficult to stomach the ban by the committees on tree felling and free grazing of cattle. They had depended on that for firewood and fodder. But the ban was required for the regeneration of trees, grasses and biomass and a non-negotiable requirement of WOTR’s watershed development approach.

Although WOTR and the committees were not surprised by the scepticism and reluctance of many villagers to participate and comply with the rules, they had to work very hard to overcome the initial roadblocks. Eventually, the sceptics and those reluctant to participate were won over by constant demonstrations of the benefits of the ban. 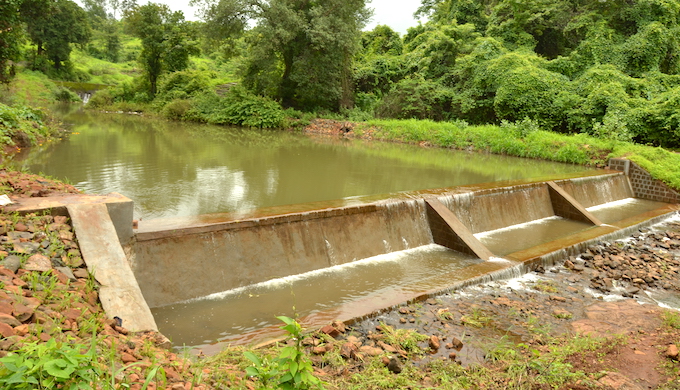 Together, through measured monetary contributions and volunteering unskilled labour approximating to INR 540,000 (USD 8,471), the villagers began to own the project, coming together and building a series of land and water conservation structures like farm ponds and contour bunds, apart from planting trees.

Their efforts were among many that resulted in WOTR being awarded the prestigious Land for Life award instituted by the United Nations Convention to Combat Desertification (UNCCD). This annual award is given to organisations that help communities suffering from the effects of land degradation. Combating land degradation is part of the UN Sustainable Development Goals. WOTR was one of three organisations around the world to win the 2017 award.

But being able to collect rainwater is not enough if the rainfall becomes as erratic as it has in interior Maharashtra in recent years – a phenomenon attributed to climate change by the Intergovernmental Panel on Climate Change.

So, an automatic weather station was installed in the village, and now farmers receive crop specific advisories, based on local weather forecasts, all as text messages on their mobile phones. Now they have more time to protect their crops from adverse weather conditions such as a break in the monsoon rains or a deluge.

The story of Wankute is the story of hundreds of villages where WOTR has worked over the past 25 years, promoting watershed development through local participation in villages that are water scarce. Since its inception in 1993, WOTR has expanded its operations to seven states, Jharkhand, Madhya Pradesh, Rajasthan, Odisha, Telangana, Andhra Pradesh and Maharashtra.

WOTR’s strength lies in its field experience and in the systems-based participatory approach that it adopts. The trust was started to support a large-scale multi-actor, multi-level, multi- sectoral, community led watershed development programme for poverty reduction called the Indo-German Watershed Development Program (IGWDP). The organisation started work in Maharashtra under the leadership of Father Hermann Bacher, co-founder and chairman, and Crispino Lobo, co-founder and managing trustee.

WOTR has been in the forefront of mobilising vulnerable communities in semi-arid and resource fragile regions to help themselves out of poverty by harvesting rainwater wherever it falls and regenerating the ecosystems they live in. It has now expanded its work to 13 thematic areas. Women’s empowerment, sustainable livelihoods, agro meteorology, climate change adaptation, disaster risk reduction, sustainable agriculture, water budgeting and water use efficiency management are its key focus areas.

Besides its sustainable land management approach, water budgeting and micro irrigation has made communities in drought prone areas more resilient and benefited at least 355,832 people. It has also trained over 380,000 people from India and various countries across the world in natural resources management and watershed development. WOTR works not only in land restoration, poverty reduction and climate change adaptation, but also leads in capacity building, empowering vulnerable communities and women, and advocating its watershed development approach at the state and national levels.

Apart from the watershed development work and the weather station in Wankute, 142 women started self-help groups (SHGs) and Samyukta Mahila Samitis, and took up various projects to reduce drudgery, increase their income and improve the quality of their lives.

After hearing about this year’s Land for Life award, Crispino Lobo said: “The union government has set an ambitious target of doubling farm income by 2022 but this will be impossible to achieve without combating land degradation. Around 57% of land in India suffers from desertification. Hence, we need to teach farmers how to catch rainwater across landscapes, recharge groundwater aquifers and improve soil health. In India, 60% of the population depends on the land and forests. Water is essential not only to agriculture but also to other livelihoods.”

“Scaling up and achieving sustained impact requires active collaboration of multiple stakeholders from across the governance, public, private and civil society sectors working on all levels, from the village upwards to the province, state, national and even international,” he added.